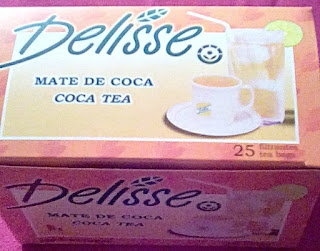 I found this vendor, oddly enough, through a Facebook ad.  The legality of coca tea is sketchy so I wasn't expecting to see it openly advertised on social media in a sponsored ad.  Being the adventurous soul I am, I decided to place a small order to see if they were legit.  Since Kokatonic is located in the U.S., I felt more comfortable about ordering.  Their variety is somewhat impressive--a nice selection of coca tea bags, coca flour & what appears to be coca liqueur.  I like the variety of price options too.  They have things ranging from $13 all the way up to the thousands.  I opted to start with a cheap order of Delisse Coca Tea bags (25 pack) to see what happened.

Shipping was fast.  I got my order in about 2 or 3 days.  Can't say the packaging was discreet though; the box had a large KOKATONIC decal on the outside.  My tea came with 2 informational pamphlets rife with misspellings & what are probably illegal health claims according to FDA standards, but they were entertaining nonetheless.  The tea itself is high quality from a well-known brand (Delisse) packaged in Peru.

I like to put a bag in my cheek with a tiny sprinkling of baking soda after using it to make a cup of tea to squeeze every bit of goodness out of it.  If you've never tried coca, it's got a green-tea like flavor...kinda bitter but mild.  It's rich in a number of vitamins & minerals & is great for altitude sickness or other low oxygen disorders.  You can put the powder in smoothies or capsules while the tea bags are self explanatory.

The effects are sort of similar to those of caffeine but less jittery.  In fact, when brewed into a warm tea, coca actually makes me sleepy rather than stimulated.  It's only when I chew it that I get any stimulation/energy at all.  There's really nothing to compare it to.  I find espresso & Yerba Mate to both be more potent in the stimulant department.  I get minor sound sensitivity from coca which limits the amount I can ingest in a day.  There is a nice burst of focus that comes with it though, and it's less irritating to my stomach lining than caffeine.

Overall, I give Kokatonic a 4.8 of 5 stars for shipping time & variety.  Had to knock some points off for the lack of professionalism in the pamphlets & packaging, though it's not a huge deal.  It would just look better if they'd tone it down a bit since coca itself is of questionable legal status already.  My previous coca vendors would take weeks to months to send out orders so this is a huge improvement on that, plus their variety of products is refreshing.  I'll definitely be placing another order before they get too popular & end up backlogged.
at January 12, 2020