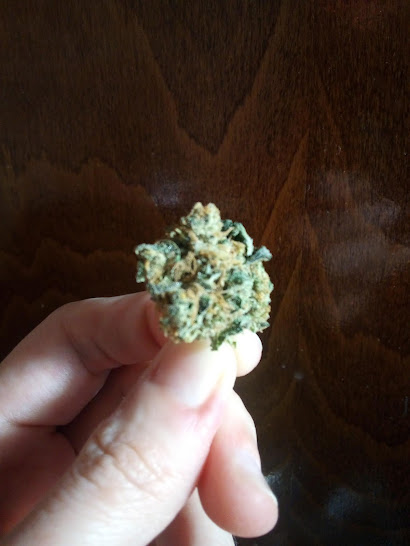 Ahh, Colombian Gold.  One of the most coveted landrace strains of the 1970s Golden Era of cannabis.  Who knew I'd find this rare strain at my local medical marijuana shop in 2021?  Santa Marta Gold is so rare that Jim Belushi dedicated 2 out of 3 episodes of his show to tracking it down in its native Colombia, where many said it was either extinct or just a myth.  This lead me to be very skeptical that what my dispensary had was the real thing, but being a licensed medical dispensary with a 4.8 of 5 star rating on Weedmaps in a wealthy suburban area, I'm choosing to suspend my disbelief & trust them.  Knowingly mislabeling a strain in an industry that's so tightly regulated, while not illegal, would be heavily frowned upon.

Colombian Gold is a landrace sativa from the high mountains of Santa Marta, a city funded almost entirely by cannabis money.  The strain was quite literally gold in color back in the day, though how this was achieved is somewhat disputed.  Some claim it was a product of curing method while others say it was produced by stripping out the black part of the main stem to restrict water & nutrients, resulting in yellowing of the plant.  Here's a visual of real Colombian Gold from the '70s:

My sample does not contain a THC/CBD percentage as it's from a different dispensary than I usually shop at.  Bummer.  The smell is sour with a lime/citrus scent and skunky afternotes.  The nugs are deep pine tree green with lots of orange & gold pistils--obviously nothing like the compressed hay-like things in the photo above.  That has everything to do with the growing and drying method of course.  The Colombian farmers allegedly had some "unique" methods of curing as well.

The effects are classic sativa with a mind melting twist.  This stuff is POTENT from the outset, coming close to being too strong after only finishing half a hemp-filled joint.  I can definitely see why it was so popular with old heads & purists who crave that stimulating hit.  This must've messed with some hippie heads when it made the rounds in the old days when THC percentages in regular weed hovered around 1%.  My hearing was properly screwed up & I yelled "What did you say?" to my brother from the bathroom as I exited... he hadn't said anything.  Nice one, brain.  My jaw is clenched & I feel restless but not uncomfortably so.  It reminds me of the first few times I got high actually.  It's a shame there's no cannabinoid info on the packaging or website as this feels on par with some of the stronger strains I've smoked.

This strain could easily replace a morning cup of coffee or whatever you use to get you going in the a.m.  I could also see it being good for people with chronic fatigue, ADHD or depression.  I was having some endometriosis-related crampy pain before smoking and now I'm not (actually I just stopped caring that I am) so that's nice.  If you like lime/citrus terps or just want to try a rare landrace strain, which all cannabis connoisseurs should, definitely give it a whirl.  As stated I'm not much of a sativa girl so the effects were a bit much for me but that's a matter of personal taste & biochemistry.

I give Colombian Santa Marta Gold a 4.7 of 5 stars for potency, bag appeal & legendary status.  If you see this don't pass up the chance to try it, especially if you like sativa-dominant strains.  It's a truly rare gem these days and you may not have another chance.

If you enjoyed this article, drop $1 (or whatever you like!) in one of the accounts below to keep this blog running.  Google AdSense does not support "drug-related" content so your contributions are greatly appreciated: