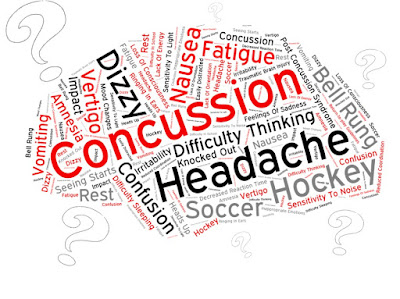 You may have noticed my absence of late.  I sustained a concussion on my way to the bathroom in the middle of the night, tripping and smashing my head on the nightstand.  Hard.  Saw stars, got sick to my stomach and blacked out for a hot second.  My neck took an awful jolt backward and I came within less than an inch of either breaking my nose or knocking out my teeth.  I called 9-1-1 & took an ambulance to the hospital where I was diagnosed with a "moderate concussion."  I've hit my head pretty hard as a kid but nothing like this.  Even Zofran via IV wasn't enough to stop the nausea.  I didn't know what hospital I was in or how I'd get home.  I legit thought the ambulance would take me back.  🧠🔨

My lingering symptoms have been mostly visual and auditory, with sounds being too loud and lights too bright, though there are also depth perception issues that are hard to describe.  Plus a general brain fog (difficulty multitasking & remembering things).  Thankfully no major problems with mood or sleep have emerged--in fact, I've had slightly less daytime fatigue since this happened & have been in an oddly positive mood.  But the fear of CTE-type issues has been looming large in my mind.  While CTE is by definition caused by "chronic" trauma to the brain, there have been cases of single concussions causing permanent personality changes (one example would be Michael Hutchence of INXS, who was punched and fell back on the concrete, after which he developed mood instability, loss of smell and taste, drug addiction and eventually killed himself).  There are others but you get the picture.  My intention isn't to frighten anybody as this is scary enough.  Personality changes after head trauma are possible but tend to happen mostly after more severe TBI.

Needless to say, I've been reading everything I can about concussion recovery.  I'll spare you the boring details but the basics are as follows:  the 1st 48 hours should be free of any sort of stress or mental/physical exertion whatsoever.  Stay off LCD screens (TV, computer, phone) and chill in a dimly lit room, doing only the basics like getting dressed & making your bed.  After 48 hours has passed, gradually return to intellectual and physical activity that doesn't put you at risk for another head injury.  Things like walking, reading & writing for 20 minutes at a time.  This INESS pamphlet is a great guide for those interested in more details of concussion recovery.  There is a science to this and much of the old advice like "cocooning" for weeks is outdated/potentially detrimental.  Above all, if you suspect a concussion seek emergency medical treatment right away and follow up with a doctor.

This IS a drug blog so let's get right to it:  Where do recreational drugs fit into this picture?  As a daily user of opioids and Benzedrex, stopping codeine cold turkey would mean withdrawal, which wouldn't be great for my overall health (mental or physical).  Stress is considered a setback during concussion recovery so I've continued using these substances, albeit in lower doses during the first 48 hours and beyond.  (To be sure they were safe, I asked my doctor if there were "any drugs or supplements" I should flat out avoid with a concussion.  He said no).  I have cut my use of both substances roughly in half, increasing them to my normal dose only as my body tells me it's okay.  I'm still not back at my full dose of either one at Day 5.

There are some common sense things to avoid or limit when it comes to substances.  In general, caffeine is advised against due to its dehydrating effects so I've been limiting it.  They also say to avoid alcohol and other GABA-type depressants like benzos or barbiturates due to their brain-fogging and clumsiness-inducing effects.  "They" being all the online guides I've come across.  Moderation and listening to your body are the most important thing.  Anything that increases your symptoms too much should be avoided.

To my surprise, some drugs are thought to help with concussion recovery.  Two of these are cannabis and psilocybin.  CBD in particular has neuroprotective effects, so I was glad to have my 3:1 CBD-heavy gummies on hand as well as hemp flower.  Melatonin is also good, especially if you have sleep issues.  Sleep is vital after a concussion as it's when the brain "cleans up" the calcium that's flooded the cells due to the trauma.  Valerian and kava are also okay if you need something to help you sleep.  Just stay away from the Ambien or benzos if possible (but don't quit abruptly if you were habituated before as that can cause fatal withdrawals).

Bottom line:  If you're not already a daily drug user, don't subject your brain to drug use during concussion recovery (with the exception of cannabis/CBD if it appeals to you & you're an adult over 18).  Just make sure your drugs are clean and come from a safe source, and take extra care not to injure your head again while impaired.  I wasn't high when my injury happened but can't rule out my earlier use of Bentyl that night--an anticholinergic drug with deliriant effects--from playing a role in what happened.  (Other factors being my pitch black bedroom and cluttered floor).

Exercise definitely makes me feel crisp and clear-headed immediately afterward but I'm taking it extra slow and avoiding anything that could possibly cause another fall.  Yoga and stationary walking for now are the bulk of it but I plan to do some jogging when the weather allows and I'm further into my recovery.  I downloaded an app that turns my computer screen progressively more dim/orange after sunset, which is thought to help get circadian rhythm on track after concussion (or anytime really).  Blue light emitted by phones, TVs and computer screens is known to mess with melatonin production so this has been helpful and I plan to keep it installed even after recovery.  It's called f.lux but for Chrome the extension is called "Screen Shader".  Meditation has also been a godsend, especially in the first 48 hours.  Calm.com has tons of guided meditations and relaxing scenes, some of which are free.

I've been STARVING since this happened and I'm not at the point in my menstrual cycle where that should be happening so I Googled "concussion hunger" and found several articles about the increased need for glucose and protein after a head injury.  Turns out the brain's metabolism requires a lot more fuel to heal after a concussive blow, so I've been supplementing with Vital Proteins (a collagen/Vitamin C powder) as well as a prenatal multi-vitamin and extra Vitamin D.  My diet is trash so it's the best I can do.  They also recommend anti-inflammatory supplements like curcumin (turmeric) or ginger root but alas, my gastritis won't allow me to eat spicy things like that.  Magnesium is important for ridding the brain of excess calcium buildup--a feature of concussion. I take Natural Vitality Calm gummies (magnesium citrate).  A diet rich in fruits, vegetables, whole grains and lean proteins is optimal for healing.  Just don't beat yourself up if you eat more than usual because it's necessary, as is drinking plenty of water.

I'm writing this article at 3-5 days out from the injury.  I must admit it's a struggle to focus my vision and attention for more than 10 minutes at a time.  But this is normal so early in the process.  Other people will have varying degrees of difficulty with intellectual and physical tasks; the important thing is not to compare your journey to anyone else's.  Brain injuries are like fingerprints:  no two are alike.  There's no set deadline for recovery--just do your best each day to follow the guidelines set out by your healthcare team and keep a positive, realistic attitude.  (Or if you don't have a healthcare team like me, check out this helpful Youtube channel for guidance on at-home rehab).

Having endured benzo withdrawal before, this brain injury has so far been an infinitely more pleasant experience.  I was already a migraine sufferer so headaches are nothing new, and as a kid I nearly broke my neck doing stupid tricks on the bed.  I feel like my poor brain has been through the ringer already and this was the last thing it needed, but I've kept my outlook positive by focusing on actionable steps I can take to recover.  I hope anyone going through the same thing will find something useful here.

Concussion is considered a "mild TBI" and symptoms fully resolve for 70% of patients in the first month, with the remaining 30% having a variety of treatment options available.  It's scary but not hopeless.  The science is always evolving and advancing; nobody is doomed to suffer forever.  But being proactive is important as doctors don't always have all the answers.  The brain is the most complex organ in the body and is capable of amazing feats like the recovery shown in this TED Talk.  But again, you don't want to go it alone if you can help it, nor do you want to put off getting help for a concussion as time is of the essence.  Know the concussion symptoms and warning signs; if in doubt, seek help immediately.

Update:  I'm now 1 week and 1 day out from the concussion and still can't remember the exact events leading up to the injury.  This bothers me because my memory is usually pretty photographic.  All I can piece together is a falling sensation followed by a BOOM where my face hit a hard surface & I was jolted "awake," though I know I wasn't "asleep" prior to the impact which is what's perplexing.  As stated above, the brain works in mysterious ways to protect us from traumatic memories and recover from unbelievable damage, but I can't shake the fear that I was having a seizure or some other kind of medical event that caused my fall in the first place.  (Highly unlikely as it looks like I tripped on a basket of medicine in my dark-ass room).  It would be nice to know for certain.

Have you had a concussion or other type of TBI?  Sound off in the comments.  I'd love to hear what helped in your recovery.