After my last order from Phytodabs of their Blue Dream shatter, I decided to branch out & try a different type of vaping product to see what else is out there.  So far I've only tried shatter & terpsolate or other variations of CBD isolate.  I opted for their hemp crumble this time which contains a more well-rounded blend of cannabinoids like CBG, CBN & CBC in addition to CBD.  They claim the crumble is more popular with customers than the isolate and it's now sold out, which supports this assertion.  Everything was on sale so I only paid $13.99 + $4.99 shipping for 500mg of crumble.  Groovy! 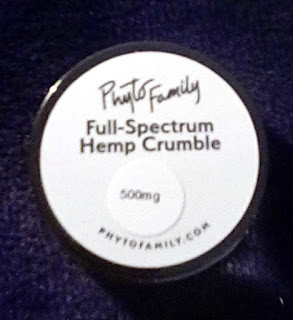 Shipping was fast despite the Memorial Day holiday.  Upon opening the container, I'm met with a mild smell of wax with a hint of woodsiness.  It's advertised as "low terpene" which is definitely the case.  I'm using my trusty old Yocan Evolve Plus vape for this test.  The first hit is buttery & tastes like it smells: very neutral but leaning toward something waxy & woody/spicy.   While the flavor & smell are less exciting than the shatter with terps, the effects have more of a full-bodied effect.  It's more akin to smoking hemp buds than straight up CBD isolate.  More relaxing & mind-expanding (obviously without the high of THC).  It almost feels "luxurious" if that makes sense...like a vaping product made for adults.  You can see the concentrations of each cannabinoid below:

Phytodabs crumble is extracted with ethanol & water without solvents, resulting in a high concentration of cannabinoids with a mild flavor.  The single-source batches contain cleaned-up terps, allowing for more refined strain notes to come through in the end product.  At least that's what the website claims.  I definitely feel a slight difference compared to the straight-up shatter made from isolate.  My eyes aren't irritated like they were with the high-terpene shatter, which is a plus.  The flavor is smooth & gets more woody with each hit, causing less afterburn--a definite plus since most CBD solids are harsh on the throat.


Overall I give this order a 4.6 of 5 stars for smoothness, effects & shipping time.  I look forward to trying more of the PhytoFamily's products since they carry such a wide variety of stuff.  Vaping CBD is my favorite method of ingestion so I gravitate toward vendors who carry a wide selection of vaping items like shatter, wax & crumble.  I refuse to pay $50 per gram though, as that's just excessive.  I blow through my grams way too fast for that to be economical so for now I'm just sampling smaller amounts of products until I find something that I love & can afford.  There's always the plain isolate slabs that sell for $20 per gram but I'm a sucker for terps & other perks.

So until next time, CBD vapers...stay cloudy.  🌥