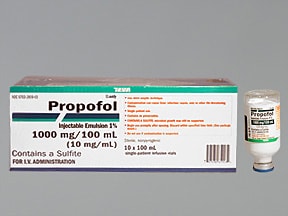 Am feeling exceedingly nervous about my first time under anesthesia so I figured I'd write a trip report to try & make it as normal as any other drug experience, heh.  I'm having a routine procedure that should last about 20 minutes, during which I'll be knocked out with propofol: the drug famous for killing the King of Pop & Joan Rivers.

I don't know how I've managed to get to my mid-30s without ever being under general anesthesia.  Most folks have had their wisdom teeth out by now at the very least.  I had eye surgery a few years back but only got a Valium tablet for it (that was fun...not).  My mother has woken up TWICE under anesthesia--once during a C-section & once at the tail end of an eye lift surgery.  The second time was with propofol.  I'm hoping that will not be an issue for me.  They've given me permission to take a benzo the night before coming in, which I plan to take full advantage of.  I've gotta quit taking my daily kratom & Benzedrex a couple days in advance which is gonna suck, but hopefully it will reduce the risk of waking up (or dying) during the procedure.

It's a 45-minute drive to the surgery center with my mom & I'm not stoked.  She's a morning person & with coffee in her system it's like nails on a chalkboard.  I try to keep calm & stuff my earplugs in, repeating relaxing affirmations quietly to myself.  Good thing I took some Imodium before bed or my bowels would be going crazy due to nerves.  Yes, I'm being dramatic because I have anxiety & am going through double withdrawals (kratom & stimulant), am starving & have a dry mouth.  Forgive me.

Check in time is at 8 a.m. sharp but the show doesn't start until 9-frickin'-thirty which means an hour & a half of waiting & worrying.  I was hoping they'd give me an infusion of benzos to calm my nerves while waiting, but no dice.  This hour crawls by with my poor stomach growling from a combo of nervousness & hunger.  I'm here FOR a stomach ailment which just makes this all the worse.  I keep imagining what happy place I'll be transported to once the IV is in, picturing a black hole of nothingness sucking me in as I drift lightly between worlds...trying hard not to think about waking up with a scope jammed in my esophagus & attempting to rip it out.

I've used a lot of downers in my day:  benzos, barbiturates (butalbital), Soma, Ambien, alcohol, thienodiazepines (etizolam), amitriptyline, kava...even crazy phenazepam which was somewhat like a dissociative & sent me into a 3-day blackout.  Speaking of which, I dissociated completely at the dentist as a child on a high dose of nitrous & even tried MXE once in my 20s.  But this is my first time with propofol.  Really hoping my brain receives it well.

After wheeling me back, they joke around & start the infusion, which burns my entire arm like a mofo as it crawls up my vein.  I mean it really hurts.  But along with the pain comes an instant fog of drowsiness & my head hits the pillow.  The procedure itself is a complete blackout but upon waking I was seeing double--literally--and feeling a combo of drunkenness & utter exhaustion.  I felt rushed to wake up but could've slept all afternoon (which I did upon returning home).  Definitely not as alert as I'd like to be.  However I was able to converse with the doctors & nurses who came in & didn't say anything humiliating like "NICE TITS!" though my voice was audibly slurred.

Propofol feels more like alcohol than any other downer I've taken, but minus the nausea & low mood/aggression.  At no point did my body feel "light" like some of the reports I've seen.  There was no euphoria or dysphoria to speak of--just a heavy feeling of sleepiness & memory impairment total amnesia.  A little vertigo & double vision as I came to, but no nausea at all.  I did giggle over silly things as I was coming out of the fog but it wasn't something I'd classify as "fun" or a real high.  I slept all the way home on the car ride, which flew by like I was in a time warp. My takeaway?  Don't be scared of going under anesthesia if you haven't before.  I'm no longer as scared of having surgery after seeing how well I responded to propofol.  This stuff really is a marvel of modern medicine.  Whoever discovered it deserves a Nobel Prize.  I can't imagine life before it.  In my mom's day, they used ether-soaked rags over the nose/mouth to knock you out.  Really.  I can't emphasize enough that you won't remember a thing from the actual procedure (unless it's a situation where they need you to be somewhat alert, which they'll inform you about).  I'm now sipping on kratom tea & have taken my daily stimulant with no side effects other than a little lingering mental fog.

I give propofol a 5/10 for recreational effects & a 9/10 for its medical utility.  I could see it being a highly humane & effective method of execution for death row inmates compared to the triple-drug injection they currently use.  Once it goes in, your consciousness ceases for all intents.  No dreams, worries or physical sensations.  Death would be quite peaceful this way, especially if they threw some fentanyl in the mix.  Aside from that there's not much potential use as a street drug but I'm sure glad it exists in hospital settings.