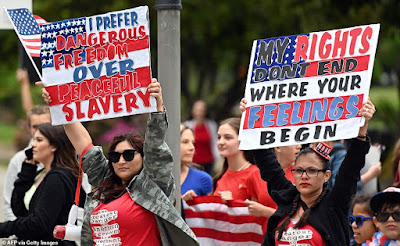 We poor souls in America are battling two pandemics, both feeding off each other & making the other worse.  One is the same as all other nations are battling:  SARS-CoV-2.  The other is our broken economic & political system that refuses to give aid to the people struggling & instead incentivizes protests to "reopen America" prematurely, get back to work, etc.

Tragically, our brainwashed populace hasn't even had the realization that maybe we should be protesting for relief checks, universal healthcare, rent freezes, unemployment & all the things other nations are getting without asking during this crisis.  And those at the top want to keep it that way.  Indeed, these protests started popping up shortly after Bernie Sanders brought up the idea of sending out $2,000 stimulus checks in the coming months.  And the protests are anything but grassroots.  They have ties to Betsey DeVos & the Michigan Conservative Coalition.  DeVos was a billionaire before joining the Trump administration, which makes all those conspiracy theories about George Soros funding protests pretty laughable.


We've now gone so far in the dangerous direction of corporate fascism that Attorney General Barr is threatening to sue state governors who prevent businesses from opening in a timely fashion.  Yes, you read that correctly.  No matter where you sit on the political spectrum, you must realize how dangerous that is.  Public health policy is being made by capitalists, not health professionals.  We've seen this movie before with drug policy, reproductive rights, sex ed in schools, AIDS-related legislation & much more and it didn't end well.  In fact, it hasn't ended at all.  We're still leaving public health policy up to politicians instead of medical professionals & scientists which has put us far behind other nations in many respects.

In all these cries to "reopen" & get back to normal, very few mentions of Covid testing, contact tracing, ventilators, PPE & other absolute necessities have been mentioned.  You know, the reasons for the lockdown in the first place.  They just want to get workers back out the door so their money will start flowing in, health & safety be damned.  This is a huge FUCK YOU to all the healthcare, food service, janitorial, grocery store, mass transit & other essential workers who have literally risked & sacrificed their lives for no additional benefit to themselves during this largely preventable disaster.  (Yes, if the pandemic response team hadn't been replaced with Trump's son-in-law Jared Kushner in 2018 & our leader had taken the threat seriously in Jan/Feb instead of poo-poohing it & golfing until March, things could've been different).  If that offends you, I implore you to get over it & keep reading.  This isn't about "bashing" your precious president.  It's about learning from this shitshow so we don't repeat it.

Here's my humble prediction of what's likely to happen if we continue down this path:  like most viruses, Covid will likely ease up a bit during the Summer months when everyone is outside & active.  We will grow tired of our social distancing protocols like they did during the Summer of 1918 & enjoy the sun & fun with the virus a distant memory.  Then when the Fall rolls around & brings with it seasonal flu, colds & stomach bugs, Covid will make its grand re-entrance...possibly in an even hardier form.  As with these other viruses, previously infected people may have no immunity after a year has passed & may be reinfected, which is bad news for hospitals which will be absolutely overloaded during the height of cold & flu season.  Bottom line:  Covid in the Winter of 2020 will look much, much worse than Covid in the Spring of 2020.  And it IS expected to be a seasonal disease.  Most coronaviruses are.

That's to say nothing of the possibility that it could mutate from something that kills 2% of its victims to 50-60% like avian flu, SARS or MERS.  The fact that it's so contagious as a brand new disease in humans is a bad sign, in my opinion, of its ability to develop other scary qualities down the line.  And that's another thing:  this is a completely novel disease!  We seem to be forgetting that in our rush to make psychic predictions & claims of certainty that this or that will happen.  Nobody knows, therefore a "better safe than sorry" approach is warranted.  It's almost as if, because the virus is invisible to the eye, people are incapable of comprehending the danger.  We didn't have this problem on 9/11, did we?  No, we banded together to do what had to be done even if it meant an unnecessary war in Iraq, unprecedented expansion of domestic spying by the NSA, rampant Islamophobia in the States & other major downsides.  Because the enemy was visible & didn't look like us.  Well, sometimes an invisible enemy can be even more dangerous.

The hypocrisy of the reactions I'm seeing is overwhelming.  The whining about the oil industry bust is almost laughable when these same people showed callous disregard bordering on hatred when Black men were killed by police officers & hard-working undocumented immigrants were rounded up by ICE & deported from their places of business.  If the virus has shown us anything, it's that empathy is in short supply in this nation.  People seem to only care about things that affect them directly--everyone else be damned.  And if the shoe was on the other foot & a blue president had bungled this so badly, these same zombies would be calling for his or her head.  (And I say that as a third party voter who has no love for the donkey OR the elephant).

I guess I should include a paragraph about our broken education system & resulting lack of critical thinking/fact-checking ability somewhere in this screed.  The only reason our government is able to get away with this brutal endangerment of its populace is because so many don't know the difference between facts & bullshit.  People honestly think you can just choose between two totally opposite sources of information making opposite claims & pick the one that best suits your worldview--and that both are equally fucking valid.  They confuse fact with opinion & wouldn't know a legitimate source if it bit them in the balls.  This is a problem.

When you're out there protesting, just remember that you're really protesting against a virus.  Reopening your business sooner won't make it go away any faster--quite the opposite.  People with a brain will continue staying at home and those who dare come in will be wearing a mask, which isn't exactly reassuring to your customer base.  Things don't magically go "back to normal" because you stomp your feet & yell.  We'd all be better served by uniting against this invisible enemy instead of splitting along party lines (for the millionth time) & cooking up wild conspiracy theories about China & Bill Gates.  In the words of Aldous Huxley, "Facts don't cease to exist because you ignore them."

And like that creepy poster at Jonestown said:  "Those who do not remember the past are condemned to repeat it."