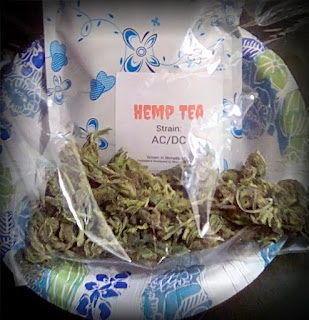 AC/DC is a strain known for its soaring CBD content--generally in the 18% range.  For whatever reason, this batch only had 6% but I grabbed it up since I live in a state without much choice or variety.  It also contains 1.8% THC, which is appealing to me for obvious reasons.

Upon opening the bag, I was met with a moderately strong smell of lemon-lime & pine.  Very different from the Cherry Wine I've been smoking.  It has a sweet scent to it that's very inviting but not overpowering.  I'd guess there's a good dose of limonene & smaller amounts of pinene.  The plant material itself isn't all that impressive to look at--bone dry & full of shake.  But I knew that's what I was getting when I bought it so no loss there.

After a few hits from my pipe I already feel a light, uplifting sensation.  Again, this is different than the Cherry Wine strain that's more relaxing & heavy.  My head feels clear even though I took half a Valium a few minutes ago..  No paranoia from the small amount of THC yet.

Just took another big toke and am really feeling it now.  Still no anxiety or rapid heart rate like I usually get from even tiny amounts of THC.  This stuff is nice!  Doesn't drag you down or make you feel foggy in the least.  I could see it being useful for ADHD, cognitive disorders like dementia or depression.  I'm curious if the higher CBD variant of this strain would feel as light & airy.  What it lacks in looks it makes up for in effects.  I just realized I've had a stupid grin on my face ever since I sat down to write this 😀

AC/DC is a hybrid strain with a CBD to THC ratio of 20:1 when grown properly, meaning it generally has no psychoactive effects.  (Yeah, well.  Tell that to my jazzed-up brain right now).  Don't get me wrong: if you have a weed tolerance you're NOT gonna get a buzz from this strain, but if you're a new smoker or someone who's sensitive to THC like I am, this should be right up your alley.  It's a great introduction into the world of cannabis for those who just want to dip their toes in before diving in the deep end of super-potent pot.

(As stated, I live in an illegal state & didn't purchase this at a dispensary but on the internet from a friend/vendor.  The operate privately but if you're interested in obtaining a list of their strains & prices email me at welpharecheeze@gmail.com)
at December 16, 2017