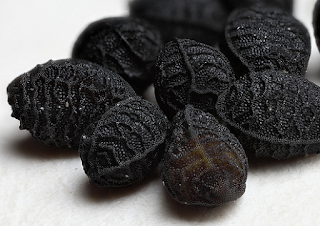 Nigella sativa--commonly known as "Black Seed"--is an ancient remedy in the East that's quickly gaining steam here at home.  Its health-promoting qualities are seemingly boundless, including anti-microbial, anti-cancer, immune stimulating, anti-diabetic, blood pressure/cholesterol-lowering effects & antioxidant effects.  It's not often that an alternative herbal health remedy is referred to as a "miracle" in scientific studies, but that's just what the authors of this study have labeled it.  Black Seed has powerful effects against H. pylori bacteria that cause stomach ulcers & helps prevent gingivitis & dental cavities when gargled.

The active compound in Black Seed is thymoquinone, a unique molecule that sort of resembles that of propofol.  Its psychoactive effects are subtle but noticeable, including relaxation, anxiety relief & other benzo-like properties.  It is also said to potentiate opiates including kratom.  (I've used it for this purpose & it definitely has a nice synergy).  The day following Black Seed use, users often report increased energy levels & mental clarity.  Black Seed Oil acts on GABA & has been used traditionally to treat anxiety, depression, epilepsy & other CNS disorders.

My first few forays into Black Seed territory were pretty remarkable:  I actually thought it might be adulterated with a benzodiazepine because the effects were THAT similar.  I felt sort of sad (like I do on benzos), relaxed & even went on an eating binge like I do on Valium or Xanax!  The more I used Black Seed, the less noticeable the negative effects became & the benefits grew more pronounced.

I now only use it on weekends to save money, but I feel it's had a great effect on my GABA system overall.  I've always reacted VERY poorly to alcohol, benzos, Ambien & other downers, but since starting Black Seed supplementation I no longer get such horrid comedowns from those drugs.  The oil is more concentrated but you can also eat the whole or ground seeds for the beneficial effects.  The taste?  It's impossible to describe as there's nothing like it in the American spice cabinet.  But I really like it.  If I were to explain the flavor, I'd say it's spicy + exotic with a hint of antiseptic after-taste.  Must not be too bad since it's used in Egypt & other countries to flavor various dishes.

This is the brand I use: 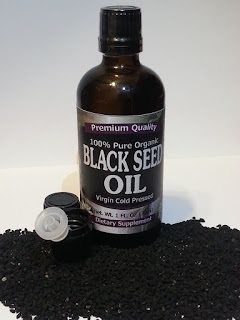 When buying Black Seed products, make sure to get genuine Nigella sativa.  Black Seed also goes by several slang names including "Black Cumin" & "Black Onion" & "Kalonji".  True Black Cumin is not the same substance, so narrow your search by typing "Nigella sativa" when shopping.
at December 02, 2017