It's finally here.  The day you've been working so hard for.  The day when all your hard efforts come to fruition.  You finally get to measure your (wet) yields & enjoy some hands-on time with your ladies during trimming, which can be a very relaxing activity if you get in the zone & make it fun.

One of THEE biggest questions on cannabis forums is:  when do I harvest?/Is my plant ready yet? Or some variation.  To a new grower this can seem like a perplexing & scary question, but it's really not so difficult.  The biggest risk is cutting it down too soon.  Let me say that again.  The biggest risk for new growers is harvesting their plants too soon.  Why?  Because you're chompin' at the bit to try your weed, of course!  And you're probably worried about letting it get overripe or "go bad," which is not a valid concern unless you're leaving town for several weeks during the harvest period & won't be around to monitor its progress.  The fact is, trichomes don't turn amber overnight.  You have at least a two week window once the plant is ripe to harvest it, and any time during that period will produce good bud.

So when does that window begin?  I'll repost the photo from the last article since it helped me so much.  Note the pistil color, trichome coverage & general difference in texture of the plant on the left:

Got it?  Good.  You'll need a magnifying glass or microscope to view the trichomes up close, which is how you hone in on exactly when to harvest.  Check out my previous article for more info on trichome color & shape and the meaning of each.

Once your plant is in the last week of life, you might choose to do a "flush" to remove built up chemical fertilizers from the soil.  Despite being a very common practice among growers, there's debate as to whether flushing is necessary or provides any scientifically-backed benefits.  I chose to do a cold-water flush about 4 days before harvest because I'd used some smelly grass tea that left behind a gnarly odor in my soil.  To perform a flush, simply flood your medium with plain pH-adjusted water until you get about 30% runoff coming out the bottom.  The goal is to get as much "dirty" stuff out as possible until the water runs clean.  Don't do any more feedings after your flush--only plain water (if that).  Some people like to let their plants dehydrate a bit or sit in the dark for a few days until harvest, as they believe these stresses promote trichome production by tricking the plant into thinking Winter is coming.  I tried both methods & have no idea if they worked, as I only grew one plant & have nothing to compare it to.  But they didn't hurt anything.

When harvest day arrives, you'll want to set aside enough time & space to do so in a private & undisturbed manner.  Get your supplies out, put on a movie or some music & get comfy.  You'll need:  Scissors, rubbing alcohol & cotton balls, a bag for discarded material & another for the good stuff.  Put a newspaper or other type of mat down if you want to make cleanup easier.  Chop your plant off about 2 inches from the soil & pick a branch.  Start by plucking large fan leaves with your fingers & then snipping the sugar leaves.  I like short, simple tutorials so here's a quick (20 seconds) vid showing how this should look:


Wet trimming is advisable for new growers because it's just easier than trimming dry.  I used broken-ass art scissors & still came out with decent looking buds, but if you're trimming a lot of plants or need them to look professional you might want to use something like the Fiskars Power-Lever Anvil Pruner. Comfort & sharpness are key features to look for in quality trimming scissors, but if it's clean & effective go ahead & use it.  When cutting your buds, slowly rotate the stem toward you as you snip, cutting off the longest sugar leaves as if you were giving the buds a "haircut".  It's okay to leave some of the frosty sugar leaves on if you don't mind a harsher smoke--that's your call.  Otherwise cut as close to the bud as possible.

Here's a bud with some sugar leaves left on: 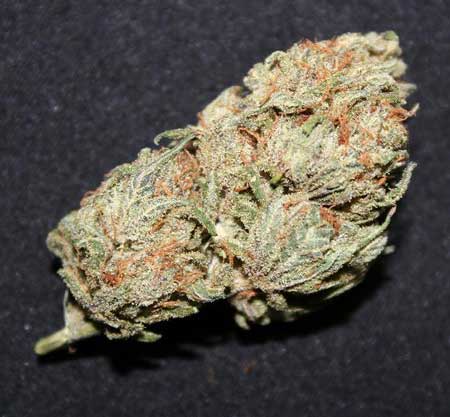 ...and one that's been trimmed "close to the bone": Sugar leaves can be turned into various extracts like bubble hash or cannabutter if you have the know-how, but as a newbie I will leave that stuff to the pros.  I just saved a few of my most sugary ones & threw them in the jar with my buds, where they will cling to them & end up getting smoked at some point.

Your scissors will probably get sticky pretty fast, but don't despair!  That oooey-gooey goodness is actually smokeable.  It's called scissor hash & can be rolled up into a ball & smoked NOW.  Yep.  Scrape as much as possible off to the side while you trim, then you can smoke it while you wait for the rubbing alcohol to dry on your scissors after cleaning them (which you'll probably need to do at least a couple times if you have a lot of plants).  This makes for an enjoyable harvest indeed.

After your plants are all trimmed up, it's time to dry them.  Your drying method will depend on the relative humidity in your area.  But don't forget to clean up everything from your trim promptly & dispose of it so it doesn't attract unwanted attention.  Your domicile is probably VERY stinky by now, as are your hands, clothes & anything else you've touched.  Bag all the leaves up in trash bags--double bag them if stealth is important to you--and do a thorough vacuuming of any carpets or rugs you might've spilled cannabis particles on.  Once all the extra plant material is out of the house, turn on all your fans & open some windows to get the stench out.  Ahhh.  That's better.

Even if you live in a legal state, you are better off not letting the world know you have a bunch of ready-to-smoke weed on you.  Cannabis dispensaries frequently get robbed at gunpoint so don't assume it can't happen to you.  Better stealth than sorry.