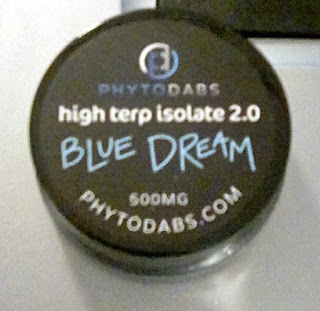 For funzies, I bought two orders of Blue Dream CBD shatter from two vendors to see which I liked better.  After my bad experience with Steve's Goods I'm shopping around for a full-time affordable source of CBD shatter.  Coincidentally I've never smoked actual Blue Dream weed but always liked the sound of its effects, so that's why I chose it for a double review.  I also picked up 5 new replacement coils for my vape so I'd be sure & get some clean hits.  (Yeah, bitches.  I'm goin' all out).  Keep in mind the opinions on things like flavor, aroma & smoothness are totally subjective.  My favorite thing lately has been to binge-watch Unbreakable Kimmy Schmidt while vaping CBD and laughing my ass off so I should be set for a while with this double purchase.  😎

First up is Phytodabs Blue Dream 99% High Terpene Isolate 2.0.  I grabbed the half-gram ($24.99 + $4.99 Priority shipping) since I wasn't sure I'd like the flavor.  Some terps irritate my GERD severely, and with this being a high-terp product I didn't wanna go all-in with a whole gram until I knew if I liked it.  It's described on the website as "Blue Dream, originating in California, epitomizes the easy daydream of a West Coast weekend."  Sounds delish, if a bit non-specific.  I'm definitely getting Snoop Dogg vibes.  It smells of pine mostly, but not very strong.  There's an underlying sweetness too.

Phytodabs uses custom-blended terpene mixes derived from plant sources in their shatter, and their CBD comes from Colorado-based hemp farms.  This product is technically a "dab" rather than "shatter" so I'm not sure how it'll work in my vape pen.  I've never used dabs, wax or anything other than shatter in my life.  Guess we'll see...

First impression:  The flavor, like the aroma, is primarily pine-y.  Not overwhelmingly, but that's really the only smell or taste I'm picking up.  The strength of the terps seems to be irritating my eyes & nose a bit.  The hits are smooth af & each "bowl" lasts a really long time.  I really dig the texture of these dabs--they're much harder & thinner than the waxy/flaky shatter I'm used to.  Much easier to handle with my little vaping tool & don't leave residue all over it.  This stuff tastes truer to actual cannabis terpenes than the previous shatter I've used, though the Steve's Goods Blueberry OG has it beat in the flavor department for me.  But this one isn't really comparable because it's not blueberry-flavored at all.  It's more like a sweet pine forest on a snowy morning.  Subtle flavor but potent effects. 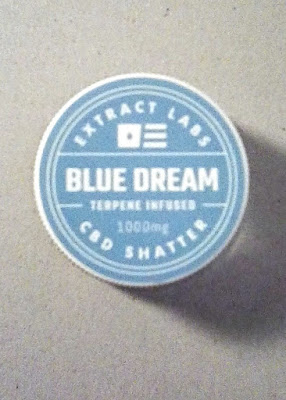 Next day I pack the Yocan with some Extract Labs Blue Dream CBD Shatter.  Because the price was right I went ahead & got a whole gram ($30).  The website claims this is their best seller for "mood elevation" which is right up my depressed alley.  The terpene profile is shown on the website, which is pretty cool.  Myrcene & pinene dominate at 26% each, with beta-caryophyllene & limonene coming in a distant second.  I must say the price is very attractive compared to what I've been paying for a gram.  Steve's Goods charged me $58.99 for a gram of Blueberry OG w/ shipping which is what prompted me to look elsewhere (among other things).  I've already gone through that whole gram.  Extract Labs uses CO2-extracted hemp & all-natural terpenes in their shatter, which contains 0% THC.

The aroma is more well-rounded with this Blue Dream shatter by far--less pine & more of a floral, minty undertone.  Much truer to actual cannabis or hemp than the Phytodabs even.  Oddly enough, the smell is stronger than the Phytodabs despite the latter being a "high-terp" product.  The hits are also smoother.  No burning in my eyes or nose on the exhale, though I'm not sure I'd call the taste "yummy" like Steve's Goods shatter.  Perhaps I need to look for something that's actually berry flavored instead.  These both taste like straight-up Christmas trees, lol.  This stuff is the exact same texture as the dabs--thin slabs that break off cleanly & easily.  Produces nice fat clouds but each bowl doesn't last as long as the Phytodabs stuff.

I feel mostly mellow after finishing a bowl.  Not drowsy but not stimulated either.  I've been extra run down lately due to Springtime fatigue & a flare up of my bladder issues, so it's hard to judge the effects properly.  But no negative side effects are noted with either product after lots of vaping.  Sometimes I'll get a mild headache or acid reflux after a vape session but not this time.  The Phytodabs stuff did irritate my eyes noticeably, which I've had happen before with terpsolate.  But it's nothing bad enough to put me off using it.


In conclusion, I give the Phytodabs High-Terpene Dabs a 4.4 for potency, texture & shipping time and the Extract Labs Shatter a 4.7 for price, aroma & flavor.  I appreciated being able to pay with a secure, preferred payment method with Extract Labs and the price was super affordable so I'll definitely be using them again.  Both companies shipped my orders out the day after ordering, and I got tracking numbers with both.  Phytodabs arrived a day earlier so extra points for them in that department.  Both orders came from Boulder, CO.  I look forward to testing out more products from these companies since they each have a long line of vape-able CBD shatter, dabs & crumble: all of which are said to work in my vape pen.