Everyone knows it's not good to drink alcohol while pregnant, but just how "not good" is it?  It's estimated that 1 in 10 American & 4 in 10 UK women consumes alcohol during pregnancy, though those estimates are likely to be lower than the reality.  Sometimes drinking while pregnant happens by accident--a woman has no idea she's pregnant & goes out to drink like normal early in the first trimester.  Other times she's under the impression that an occasional glass of wine or a beer is harmless.  In rarer instances, she's a full-blown alcoholic who can't stop drinking large amounts.

The fact remains:  There is no safe amount or kind of alcohol during pregnancy.  Ethanol readily crosses through the placenta into the baby's developing body where it causes all kinds of havoc.  Different fetuses have different susceptibilities to the effects so there's no universal threshold above which teratogenic effects will occur.  Alcohol is actually one of the most dangerous intoxicants to consume while pregnant due to the risk of Fetal Alcohol Syndrome.  While other substances can cause problems of their own, there is no equivalent "Fetal Marijuana/Cocaine/Ketamine Syndrome" or the like.  Alcohol is uniquely dangerous & happens to be the most commonly used intoxicant around the globe due to its social acceptance & legality, which makes for a bad combination.  Yet when the CDC came out in 2016 with the recommendation that all women of child-bearing age not drink unless they were on birth control, there was an outcry from people who felt the guidelines were an attempt at "mom-shaming" or an overly prudish scare tactic.

As someone who identifies as a feminist & supports a woman's right to choose, I disagree.

It's far less cruel to abort your fetus than to expose it to a teratogen like alcohol in utero, which could potentially sentence it to a lifetime of immense mental & physical suffering.  FASD is a spectrum disorder; just because a child doesn't show all (or any) of the facial signs doesn't mean they're not affected.  A few of the psychological effects of milder FASD include:

...look familiar, teachers?  One has to wonder how many cases of ADHD, ODD, autism spectrum disorder & other behavioral/developmental disorders are actually a result of prenatal alcohol exposure.  The problem could be more widespread than we ever imagined.  Sadly, the majority of these kids are being treated solely with (more) drugs without the benefit of other adjunct therapies like counseling.

Personal story time:  My mother smoked 2-3 packs of cigarettes a day while pregnant with me & drank one beer during a night of stress.  I have Asperger's, depression & multiple anxiety disorders including OCD.  I struggled greatly with math, almost flunking out of high school due to a learning disability & ending up taking remedial math in college twice.  My physical health is generally poor.  I have NO idea if the two are related but it certainly didn't help being exposed pre-natally to those substances.  Maybe I was one of the fetuses who was more sensitive to alcohol's effect due to genetics or the combined effects of tobacco exposure?  Or perhaps these conditions would've affected me anyway.  It's impossible to know.  My mom did the best she knew how at the time & I harbor no resentment.  Still, it would've been nice to have started life without those extra biological challenges.

Parenting is about sacrifice & putting your kids first.  If a person can't abstain from drinking for a measly 9 months, are they really mature enough to be a parent...a job that requires immense, sustained self-sacrifice?  Children already face a number of obstacles in our society that can affect their health & development, from poor nutrition & variable schooling quality to lack of medical access under our privatized healthcare system.  Do they really deserve to start life with yet ANOTHER setback that happens before they've even left the womb?

Don't misunderstand.  Substance abuse should not be a crime as long as it only involves the individual.  There should be no stigma attached whatsoever, but as soon as innocent beings are brought into the picture, that's when it becomes a moral issue.  That goes for drunk driving, child neglect while high, stealing to support a drug habit and, yes, drinking while pregnant.  Irresponsible reproduction is the real crime.  If you KNOW you have a drinking or drug problem & aren't financially, emotionally or physically equipped to give a child the best life, having a baby anyway is an immoral act deserving of punishment.  There are too many contraception options to excuse this behavior.

Oh, and statistics say that half--yes, HALF--of all pregnancies in the U.S. are unplanned.  So that proves just how little thought goes into family planning to begin with.  The claim that birth control fails, while occasionally true, is not the over-arching reason for this & we all know it.  Statistics on contraceptive failure bear this out; it's a rare occurrence when used correctly & consistently.  Likewise for pregnancies resulting from rape--they're absolutely atrocious but only account for a fraction of all unplanned pregnancies.

None of this should trigger feelings of defensiveness in you, dear reader.  Sometimes people just don't act responsibly.  That goes equally for men & women.  It takes 2 to produce a pregnancy but only one to cause Fetal Alcohol Syndrome, unfortunately.  Like most reproductive responsibilities, this one falls on women.  If you don't like the recommendation, get on birth control & continue drinking until your heart's content.  Or abstain from drinking & have all the unprotected sex you like.  But you really shouldn't do both if you care at all about the health of your future fetus (assuming you're going to carry the pregnancy to term if one happens).  Like drinking & driving, drinking & pregnancy don't mix. 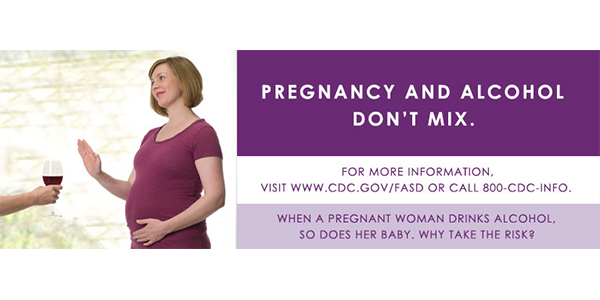