The Eternal Darkness of Ian Curtis 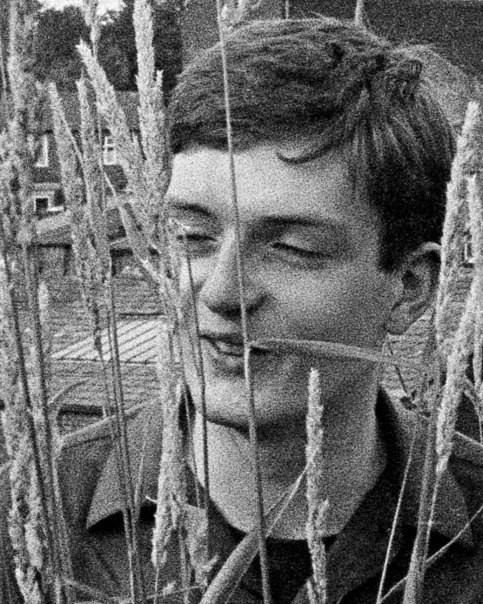 If you're a young millennial or Gen Z'er, the band Joy Division may not strike much of a chord.  Indeed, they weren't around for very long in the late '70s & early '80s but they made a big impact on the post-punk music scene, ultimately becoming one of the most influential bands of the '80s.  Lead singer Ian Curtis's unique bass-baritone voice is one of those instantly recognizable ones--admittedly I wasn't too crazy about it at first.

But after watching a documentary on his life & untimely death, I began to listen a bit harder & their music finally clicked with me.  And why shouldn't it?  I'm a huge fan of "downer" music...the kind 'normal' people blast after a painful breakup or terminal diagnosis (half-kidding).  Kurt Cobain's desperate wailing; 2Pac's hopeless, angry screeds; Lou Reed's heroin-tinged howls...you get the picture.  You'd think I would've gotten on the Joy Division bus much sooner.  In fact, Ian Curtis may just be one of the most depressing artists of the 20th Century.  About 90% of his pictures on Google Images are in black-and-white, which is rare for any artist from the colorized era.  That's pretty telling in itself.

Ian Curtis was born in 1956 in Lancashire, England.  He was an intelligent, book-smart guy from a typical 2-parent home who received many awards for his academic performance.  Like many teens, he experimented with various substances with friends, including stealing prescription drugs from his part-time gig working with the disabled.  He once swiped a bunch of anti-psychotics & ended up unconscious on his floor after which he had to have his stomach pumped.  But in every other way he was a typical dude with a penchant for art, literature & music.  Particularly music.

Eventually he quit school to work in a record shop, marrying a woman named Deborah Woodruff in 1975 whom he would have a daughter with 4 years later.  He formed the band Joy Division in 1976 after attending a Sex Pistols concert with friends Terry Mason, Peter Hook & Bernard Sumner & the rest is history.  Pretty straightforward success story, right?  Wrong.  You see, Ian Curtis developed severe, intractable epilepsy in 1978 which caused a downward spiral that eventually led to the destruction of his relationships, career & mental health.


No one is sure what caused the onset of the epilepsy so late in life, as he didn't seem to have the disorder as a child.  Nor did anyone in his family.  He wasn't a heavy drinker or drug abuser so that wasn't it either.  The fact that such a serious disease could just strike at random is extremely sobering, and that was certainly the case for Ian.  As his band was rising to stardom--suddenly surrounded by girls, booze, drugs & the trappings of stardom--he was forced to abstain & stick to a strict sleep/wake regimen, avoiding stress & other seizure triggers.  He'd never been a big partyer anyway but as a man in his early 20's with the world at his feet this must've been a big bummer.


Worse yet, the medications he was prescribed for his condition didn't work to control his seizures & had the horrific side effect of causing depression & personality changes, as depressants often do.  He was taking a hodgepodge of barbiturates, anti-convulsants & other heavy drugs like phenytoin that made it hard to keep his eyes open.  He would often have seizures onstage or shortly after stepping off.  His marriage to Debbie was deteriorating due to mood changes & an affair with another woman--something he hated himself for.  He couldn't hold his baby for fear he'd drop or injure her if he had a fit.  Despite doctor's orders, he took to drinking alcohol, smoking & staying up late while performing.  On one occasion, he seized so hard he fell & knocked himself unconscious where he laid on the bathroom floor until he was discovered by band mates.


As someone who's experienced the black depression caused by benzos & other depressants, I can tell you there's no worse feeling out there.  Opiate withdrawal, MDMA comedowns...nothing comes close.  Not even an acute panic attack or other psychiatric event can compare to the duration & severity of hopelessness, cognitive impairment & impending doom caused by depressants taken long-term.  I can only imagine how Ian Curtis must've felt being forced to take these drugs daily in large doses AND deal with the uncertainty of when/where his next seizure would occur.  His sleep must've been so disturbed...his mood so low.  Chris Cornell & Mark Linkous of Sparklehorse could testify to the effects of benzos & other downers if they were still here, as both of them were long-term users when they killed themselves.  Kurt Cobain too.  If you're prone to depression or other mood disorders, these meds can be a death sentence.


But so can epilepsy.

So what's an epileptic patient to do?  Even less was known about the condition in Ian's day.  We now have a bigger & better arsenal of treatments, but people with severe epilepsy are often left to languish or choose between brain-destroying seizures or brain-destroying drugs.  Singer Teena Marie had to make this decision & ultimately chose to stop taking her prescribed diazepam (Valium) due to side effects, ultimately dying in her sleep of what was likely a seizure.  Yes, the depression & cognitive side effects of depressants can be so bad that some epileptics will choose to take their chances with seizures instead of continuing treatment.  That says a lot.  Even if a seizure doesn't kill an epileptic, depression might.  That's ultimately what happened to Ian Curtis.

On April 6th, 1980, Ian made his first suicide attempt by overdosing on pills.  He was saved but clearly had no zest for life left afterward.  His marital relationship was going down the drain & he was stressed (yet excited) about touring.  Joy Division now had two full-length albums under their belt & were at their peak as a band.  They were going to embark on an American tour where Ian could explore the land of his idols Jim Morrison, Lou Reed & The Velvet Underground.  On the eve of the band's first American tour, Ian attempted suicide by hanging, this time completing the act.  Friends & band mates were shocked despite all the warning signs being there for years.  Despite their support, they couldn't help lift him out of his own misery.  (Understandably so).  His was a chemically-based depression with additional complications caused by disability & the stresses of fronting a popular band.  He was 23 when he died.


Curtis's surviving band mates continued performing under the name New Order & remain together to this day.  Their blend of minimalist gothic rock mixed with acid house & fizzy dance pop was highly influential throughout the '80s.  As with many popular dead celebrities, Curtis's death helped propel Joy Division to the legendary status they maintain today.  Their first #1 single "Love Will Tear Us Apart" came out shortly after their lead singer passed away.  They only released 2 full-length albums in their entire time together but are considered one of the most important British bands of the time.  Ian's spastic dancing evoked the visual of someone suffering an epileptic fit on stage & set him apart from other performers in the aesthetic department (did we mention his unique voice?).

Joy Division's songs are timeless masterpieces of doom & gloom, marking the last great wave of music before gaudy '80s hair metal & teeny bop pop took over.  We can largely thank Ian Curtis for that since he was the songwriter & singer, but credit must also go to his band mates who kept the fire burning after his passing in a way that was both respectful & innovative.
at August 11, 2019