5 Reasons Legalizing ALL Drugs Is the Way Forward 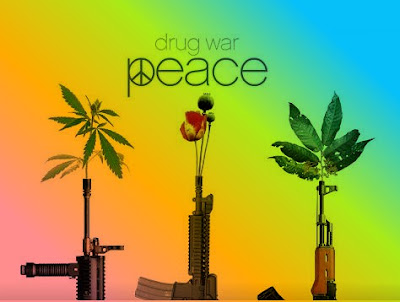 While a majority of Americans now support legalizing marijuana, others are reluctant or outright against legalizing other substances like cocaine or opiates.  While I can sympathize with their reasoning, this is a hypocritical position to take.  There are many myths surrounding drug legalization that need to be debunked before we can have an honest discussion, some of which require you to actually do a bit of research.  Fortunately the data exists because other countries have softened their drug laws with very positive results.  (See:  Switzerland, Portugal & the Netherlands).  No model is perfect but there are an infinite world of possibilities once you get past the initial fear & stigma of drugs themselves.

Here are my Top 5 reasons all drugs should be legalized, starting with plants & moving into more popular "staples" like LSD, DMT, speed, GHB & 2C-B.

1.  Legalizing a drug does not = condoning its use.  It's a purely legal decision, not a moral message.  It also doesn't increase the rates of use of said substance.  Quite the opposite.  It merely takes control of the drug supply back from the violent cartels, smugglers, gangsters & dealers who currently profit from the black market trade, de-funding these criminals & putting that money into the hands of entities who must check customer ID & follow rigorous safety standards when manufacturing their product.  As with legalized cannabis, it would also bring in a great amount of tax revenue for states...money that's currently funding violent groups like the Sinaloa Cartel, the Bloods & MS-13.

2.  Your body, your choice.  Drug legalization should not be based on the merits of each individual substance nor their perceived harms but on the principle that locking people up for altering their own consciousness in private is inherently anti-constitutional & cruel.  As long as you don't impose your drug use on others via bad behavior, it should be your personal business alone.

3.  Increased purity & safety.  Legalizing drugs like opium, amphetamine, mushrooms, ketamine, MDMA & other popular recreational substances will automatically reduce or even eliminate the market for Frankenstein chemicals like like synthetic cannabinoids ("Spice"), bath salts & carfentanil.  The only reason these drugs have a foothold is because they subvert the legal system & allow users to get high without breaking the law or failing a drug test--not because they're more desirable or safe.  Also: no more tainted drugs in a legalized market because everything will come in measured doses & be regulated for purity.

4.  Real drug education for kids.  Legalizing drugs will allow for honest, practical drug education programs in schools that give students harm reduction info in addition to the abstinence-only, zero tolerance message they currently receive.  We know abstinence-only education doesn't work, whether it's Sex Ed or drug education, so to continue the "Just Say No" method without offering alternative safety tips is sending the message that anyone who experiments with drugs deserves to die, get addicted or whatever other awful fate befalls them.  This is callous, untrue & has no place in the 21st Century.  Yet with drugs currently being illegal, it's the only socially acceptable message educators feel they can give--particularly if those educators are police officers like in the D.A.R.E. type programs.  Legalization would open the door to more effective & compassionate harm reduction education that would save lives.

5.  Less waste of taxpayer dollars/more efficient policing.  Once we stop wasting taxpayer resources locking up non-violent drug offenders, we can direct those resources toward filling our prisons with rapists, child molesters, murderers, large-scale environmental polluters (i.e. BP execs), stalkers, animal abusers, domestic abusers & others who pose a real threat to the safety of law-abiding citizens.  That's what prisons are for; not for those whose lifestyles we simply disagree with.  As for drug addicts, we can use the money saved to offer them affordable treatment if & when they're ready to receive it.  Literally everyone wins.

In no way does this promote a lawless society.  Someone gets behind the wheel intoxicated?  They go to jail.  Show up to work higher than a kite?  Congrats, you just lost your job.  Neglecting your kids because you've been up for days tweaking?  You stand to lose custody just like any other neglectful parent.  Drugs are no excuse for bad behavior.  Just the opposite--in a prohibition-free society, drugs will no longer be as readily scapegoated for the decisions consenting adults make.

If you're afraid of people using drugs, just be aware that it's already happening at an unprecedented rate.  Literally nothing we could do would make it worse except to stay on the current path.  We've tried prohibition for 80-some years & it hasn't worked.  Drugs are more potent & abundant than ever.  You can't arrest your way out of a public health epidemic.  Like arguments against abortion, those against drug legalization are usually based on feelings like fear, bigotry & disgust rather than logic & facts.  Laws governing peoples' bodies must be based on facts...not feelings or politics.