Lyle Alzado: Did Steroids Cause His Cancer? 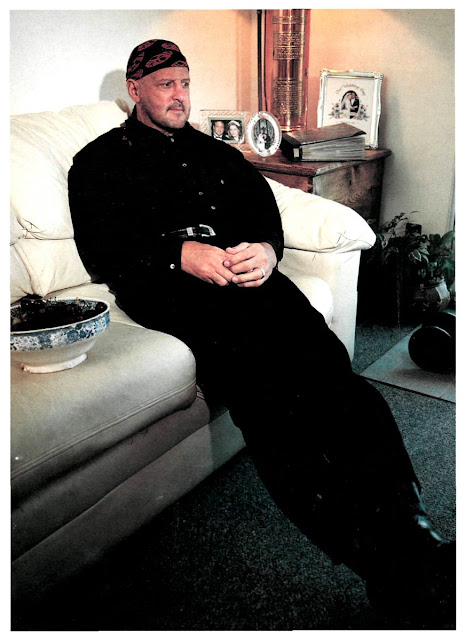 Once known for his brutish antics on the football field, Lyle Alzado might be remembered even more for the stand he took against anabolic steroids in his final days as he wasted away from cancer--a cancer he attributed to decades of steroid abuse.  Indeed, his tragic story turned many kids away from steroids & served as a cautionary tale about taking the shortcut to success.  But there were questions even while he was still living.  Did the steroids actually cause his brain cancer?  Was he telling the whole truth about his lifestyle?


LIFE OF A LEGEND

While he's been painted as a martyr since his death, Lyle Alzado was much more of a complicated figure (to put it kindly).  He was married 4 times & cheated on every partner he was committed to, violently attacking a few of them.  One of 5 children raised in Brooklyn, Alzado was a victim of an abusive father & suffered much unresolved trauma throughout his life as a result.  He latched onto steroids early in his football career to add size to his small frame & went way overboard with the dose, continuing to use them even after retiring from the NFL.  He reportedly used much higher doses than typical steroid users do, and he rarely "cycled off" which resulted in mood swings & other predictable side effects.  He was allegedly a health nut in every other respect, avoiding drugs & alcohol and spending hours in the gym to stay fit.

Alzado wasn't shy about assaulting people on the gridiron & even got a violation named after him in the NFL for throwing a helmet at a player.  But it was off the field that he did the most damage.  Ex-wife Cynthia Alzado claims she was battered during her husband's 'roid rages & that their son was left high & dry with no child support during the height of Alzado's football career, yet he had the nerve to go on public TV & beg for money for his own hospital bills.  She recounts:

"He could walk into the house after a game, stop on a dime and, all of a sudden, he's grabbing my hair and throwing me across the room. The first real bad moment was before he left for the 1984 Super Bowl. He beat me. I don't even remember why."

When pressed about his use of steroids during his heyday in the league, he never confirmed or denied it & made smug remarks about how it was "an athlete's choice."  To be fair, in the '70s & '80s steroids were ubiquitous in the NFL & it was not illegal to use them.  It was only after Alzado's cancer diagnosis in 1991 that he denounced steroids & drew negative attention to the drugs.

After a 5-year retirement from football, Alzado decided to make an ill-fated comeback to the NFL in 1990 at the age of 40.  While he trained his heart out (and took some nasty steroids including Human Growth Hormone), he was cut & never saw gameplay that season.  During his 4th wedding in 1991, the first symptoms of illness showed up as he limped down the aisle.  A few days later he was in the hospital & diagnosed with a rare cancer of the brain:  primary central nervous system lymphoma.  It was a crushing blow.  He abruptly lost 30 pounds & most of his hair.  He soon showed up on talk shows & the cover of Sports Illustrated with the famous headline:  "I Lied".  The accompanying article detailed his use of steroids throughout his career.

While his honesty is to be commended, skeptics always wondered about the science behind his claims.  Can anabolic steroids REALLY cause brain cancer?  Rumor had it that Alzado had HIV acquired from sharing dirty steroid needles or having unprotected promiscuous sex.  Some tabloids like The Globe even asserted he was secretly gay.  When I was doing a cursory Google search on Alzado, the following pics came up.  I'd be lying if I said I didn't giggle:

To be clear, there's absolutely NO evidence that Lyle Alzado was gay.  And you don't have to be gay or bisexual to catch HIV.  We do know the man engaged in affairs with many women during all of his marriages during a time when HIV/AIDS were at their peak.  That's sufficient to get infected--just ask Eazy-E, Magic Johnson or the millions of African men who caught HIV from a woman.  And if he was sharing needles in the '70s & '80s?  Yeah, his risk just skyrocketed.

Even at the time, there was controversy about whether Alzado had cancer or AIDS (with the cancer being an opportunistic infection).  A murky article in the LA Times didn't do much to clear the issue up.  It states:

So the death certificate tells a different story than the doctor did while he was alive?  Suspicious.  It's also confusing because T-cells are the ones generally affected by HIV/AIDS, but B-cell lymphoma of the CNS is the one associated with AIDS--not the T-cell variety.  Alzado's death certificate says he indeed died of the B-Cell type.

This sent me on a Google search to learn more about this cancer.  What I found was that primary B-cell CNS lymphoma is extremely rare in people who aren't severely immune-suppressed.  AIDS is the #1 cause of primary CNS lymphoma, period.  Could Alzado's decades of steroid abuse have suppressed his immune system to the point it allowed this type of cancer to take hold?  Nobody knows, as he was essentially a human guinea pig.  He abused dirty "bathtub" steroids like quinolone, bolasterone, Equipoise & Anavar as well as dianabol & others.  There are no controlled clinical trials that juice people up with this combo of drugs for decades to see if they develop rare brain cancers.  I suppose it's possible, but we KNOW it's a cancer associated with AIDS and that AIDS is the leading cause of this type of cancer.


WHAT IT ALL MEANS

So if Alzado had AIDS does that change anything about his message or its importance?  In my opinion, not really.  If he got HIV from sharing steroid needles, it's still steroid-related.  If he got it from reckless, promiscuous sex, that's likely linked to his uncontrollable sex drive fueled by excess testosterone & the trappings of football stardom (which he likely wouldn't have achieved without the drugs due to his small size).  Harm reduction is important but avoiding drugs altogether is the only way to completely eliminate the risks which go beyond just dying.

Steroid proponents are the main pushers of the AIDS theory online, probably because it allows them to continue using their drug of choice with no worry or guilt.  They conveniently ignore the OTHER toxic effects of the drugs on Alzado's life:  the violent 'roid rages leading to domestic violence, the team-hopping, depression, broken relationships & his generally chaotic impulsive behavior (some of which may have been due in part to other causes).   If he hadn't gotten cancer, he would've likely died young with CTE-related causes as a result of all the head trauma he acquired on the field.  This again can be traced back to Alzado's overly aggressive style of play driven by steroids.  He once broke a metal football dummy in practice.  Even in an era of violent play, Alzado went over the edge.  Anyone who claims that steroids didn't influence his personality & decision-making is lying to themselves.

Whether his cancer was caused by steroids, AIDS or just happened spontaneously as cancers often do, Lyle Alzado died an early & painful death after living a lonely & emotionally unfulfilling life.  He lived the American dream of athletic stardom & wealth but struggled to maintain relationships with his children, romantic partners & other loved ones.  His decision to come clean & expose the NFL's dirty little secret was a brave one that wasn't appreciated by everyone but sent an important message:  achievement--be it athletic, academic, professional or otherwise--isn't worth more than your health & integrity.  If you make it more important, you'll end up paying in the end.