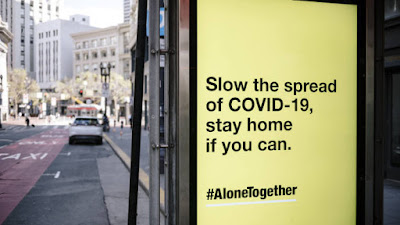 Disclaimer:  Like thousands of Americans with symptoms suggestive of COVID-19, I wasn't tested due to a severe shortage of test kits.  So this entire article is based on my own conjecture & suspicion.  Do with it what you will.

I'm a hermit for whom this whole "social distancing" thing comes naturally.  You don't have to TELL me to isolate.  But I just so happened to require an emergency tooth extraction in the midst of this pandemic, which was scary due to my germophobia.  Luckily I've been in therapy for the past year so I was able to manage THAT fear & focus all my panic on my dental phobia.  Joy.  The extraction was awful but I got Lortabs afterward (score!) so it was all worth it.  The dental assistant was coughing demurely through her mask but I was side-tracked with the 7 shots (!) required to numb my mouth to yank the tooth.  It came out in pieces.  There were tears.  All mine.

That night I noticed the Norcos were barely working at all.  I felt cranky, confused & extremely hot...a combination of feverish & hot flashy in a way I can't quite describe.  I was also moody which is odd considering the relatively large (for me) supply of pain meds I'd just acquired.  Normally this'd be cause for celebration but I just felt unhappy.  And slightly dizzy.  Pain meds don't make me dizzy unless I take a bunch & ride in a car which I hadn't.  (If the mental/emotional symptoms sound odd, check out the Sickness Behavior article I wrote recently.  Very timely, heh).

The next day is when the random waves of fatigue kicked in.  I fell asleep during meditation & again around sunset.  I'm a light sleeper & that never happens.  Even while I was on a Lortab I felt drained of energy & cranky, which is NOT the norm.  They always make me energized & euphoric so I knew something was off.  Maybe it was a dental infection setting in?  My mouth did hurt several days after the extraction.  Better call in some antibiotics.

After a few more days of weird hot flashes, dizziness & fatigue, I got my clindamycin prescription only to acquire a new symptom:  dry cough.  It wasn't an involuntary, unpredictable cough but one I was forcing to clear my lungs of whatever was making it hard to breathe.  While I wasn't gasping or drowning by any means, I can see how someone with COPD or another lung condition would be struggling.  It felt reminiscent of the bronchitis I had as a kid when I was fighting a viral infection.  Lungs were probably at about 80% functionality if I had to guess, and sore.


Now I knew it wasn't a dental infection.  And I don't have allergies that affect my lungs.  Still, I checked the allergy report in my zip code just to be sure, even though I REALLY don't have allergies that affect my lower respiratory tract.  Nothing but a little ragweed.  Mold is my main allergy trigger, but even that doesn't cause lung symptoms.  I'm not asthmatic, so that narrows it down even further.  Influenza, which I've only had 2 times in my whole life, is marked by severe joint & muscle aches which are totally absent here.  That leaves 2 options:  a common cold or COVID-19.

My symptoms were unique in that they waxed & waned throughout the day, sometimes seeming completely absent & then coming back full-force (usually worst in the mornings & evenings but not always).  In addition to the dry cough there was also sneezing & runny nose.  And random nausea that lasted only moments at a time.  My dreams were vivid beyond what's normal for me, which is typically what happens when I'm sick or in opiate withdrawal.  (I'm not withdrawing from anything at the moment).  I've coughed up a tiny bit of phlegm so far so I know there's an infection going on.  I won't get into gross details but yeah.  The sputum is not exactly clear.

From start to finish it's lasted from March 13th - March 26th (tentatively).  I'm starting to feel better as of the 25th but still not 100%.  Still feeling wheezy & sneezy but my energy is coming back & my mood is greatly improved.  I've done my best to isolate & haven't left the property since falling ill.  I will continue to be vigilant because I know this is contagious after one begins to feels better.  Hand hygiene is a top priority & high-quality sanitizer is in abundance (thanks, OCD).

To recap, my symptoms were as follows:


So did I have the COVID?  No way of knowing, which is beyond frustrating.  The dearth of test kits in the U.S. is inexcusable when the WHO has shipped such kits to 57 other countries.  Yet we insist on "making our own" (and have done a shit-tier job so far).  My state wasted 20% of our entire supply of kits on an NBA team, which tells you just how few we had to begin with.  In the rest of the nation, your only hope of getting one is being a celebrity or someone who's traveled to a "high-risk" area like China or Italy...never mind that the whole planet is high risk since the virus has spread to virtually every corner of the globe by now.

So before you accuse me, Greta Thunberg or anyone else of self-diagnosing or attention-seeking, maybe point the finger at the inept governments that failed to provide adequate tests & other medical care.  Epidemics & pandemics aren't unexpected; new infectious diseases pop up every few years.  What the hell are we paying taxes for if not decent healthcare (among other basic quality-of-life features?)  Oh, and if you haven't done so recently, thank a healthcare worker for their service.  They're battling this nightmare with woefully inadequate protective equipment akin to what the Chernobyl cleanup crew was given.  And we know how that turned out.