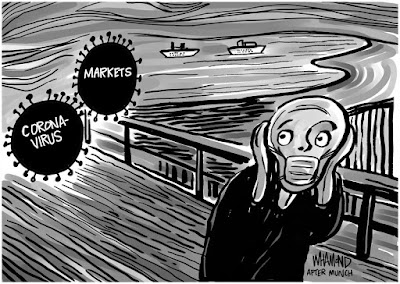 I know, I know.  We're all sick to DEATH of hearing about this stupid virus.  I don't even want to see its name again in print or my head's gonna explode.  And yet here I am, writing a fucking article about it.  But I see an all-too-familiar pattern developing here in America, one that's repeated over & over with a lot more than Coronavirus.  The pattern of which I speak is an inability to navigate the space between blind panic & dangerous apathy.  It's in this space where problems are solved, yet Americans insist on going to extremes, either choosing to shrug off a novel pandemic virus as 'no worse than a cold' OR hoarding goods like toilet paper & ammunition in preparation for a doomsday scenario out of a zombie flick.


A History of Extremes

We did this with AIDS, first choosing to blow it off as a "gay disease" that was "killing all the right people" (that was an actual slogan in the '80s) before flipping the fuck out & going the other direction, telling people you could catch it from a toilet seat or other casual contact.  In the latter scenario, doctors & nurses refused to treat AIDS patients or only entered their rooms with ridiculous moon suits on while EMTs often left suspected AIDS patients to die at their homes rather than making physical contact with them out of fear.  As a result, people died alone without dignity & were treated as pariahs by society in their last days.

Yet the former scenario of downplaying the seriousness of the disease allowed it to spread unchecked for many precious years when we could've been mounting a response.  Blood banks were afraid of offending gay donors & refused to screen blood for co-infections like Hepatitis B due to increased costs, resulting in a widely tainted blood supply.  Heterosexuals told themselves it only affected those "other" people, which is exactly what's happening with COVID-19 now--it's only affecting "the Chinese," or "the Italians," or "those people in other states" and will only kill "old people or those with bad immune systems".  Both extremes are dangerous in their own way.

And then there are all the drugs throughout history we've done this with.  First was cocaine, once hailed a miracle supplement that was "no more addictive than peanut butter".  Sigmund Freud was a heavy user until the tide turned & he became its biggest critic.  The government deemed it a devil drug that made Black men rape white women & it was swiftly banned.  Ditto for opium, which was popular among Chinese-American railroad workers in the late 19th Century.  And then came cannabis which was a staple among Mexican immigrants in the early 1900s before Harry Anslinger waged his Reefer Madness campaign, having it banned in the 1930's.  All were targeted for extremely racist reasons.  We're currently repeating this pattern with OxyContin & other opioid painkillers which we were told through the 1990s were non-addictive & should be used liberally for chronic pain before they were abruptly pulled away from patients, resulting in the fentanyl overdose epidemic.  Oopsie.

In each case, the pendulum of public opinion swung from "miracle drug with no risks" to "demon drug with no benefits"...neither of which was accurate.  There have even been entire decades that followed this pattern:  the uptight "Father Knows Best" 1950s followed by the Free Love, Drugged-Out 1960s.  This pattern was repeated in reverse as the heady Disco Fever 1970s bubbled over into the Reaganite 'Just Say No' '80s in which thousands of Americans were sent to prison for non-violent drug offenses--many of whom remain there to this day. At no point did we stop to think that maybe a little moderation was called for.

Sadly, we Americans never seem to learn from history even when it's recent.  Our ever-decreasing attention spans are a major hurdle.  We want information that is exciting, sexy & sensational... to know "special" inside info others aren't privy to, such as hidden cures for, say, COVID-19.  Boring advice like 'wash your hands for 20 seconds with soap and water' just doesn't grab our attention like 'the virus is a New World Order plot, but not to worry!  You can kill it with elderberry & Vitamin C.'  If a story can be politicized to demonize or praise a certain politician or party, we'll do that too.  And then you can REALLY forget about balanced reporting.  Going to the source is too much trouble for most busy/distracted folks--we'd prefer get our info from social media memes or pundits on 24-hour "news" channels like CNN or FOX.  You know, the ones that already confirm our inherent biases.  The problem is that information is like playing telephone: it contains bits of truth but has been filtered down to present a specific angle, which means you're not getting the full picture.  And that's dangerous when public health matters are involved.

If you want to know the unvarnished truth about a disease like COVID-19, go to the source:  the scientists, doctors & nurses on the front lines of the epidemic.  Organizations like the WHO, CDC & your state's health department are the places to look for factual tips on how to behave in an epidemic.  If you want the honest scoop on an illegal or novel drug, you'll likely have to look in more than one place since there's so much bias against recreational drugs in our society, but Erowid.org, MAPS.org, The Good Drugs Guide & PubMed.gov are good places to start.  Granted, this takes a bit more effort than scrolling through your Facebook feed for passive answers but it's worth it if you want facts rather than half-baked opinions.

And remember:  No source of information is 100% complete.  Science is an ongoing process.  It's easy to critique the work of others but much harder to go into the lab & work with these pathogens, chemicals & other "sciencey" things yourself every day.  Just because there's a dearth of information about a subject doesn't mean there's a conspiracy to hide the truth, or that you can fill in the gaps with whatever suits you.  It simply means we haven't got it all figured out yet.   And the fact that the medical/scientific community is open about that is a GOOD thing, as Martha Stewart would say.


The Future of Public Health

Personally, I'd like to see this lockdown approach applied EVERY cold & flu season to a lesser extent to prevent the spread of these illnesses & the inevitable deaths that result from them.  There's no reason people with something like norovirus should be preparing food at a restaurant or sick kids should be spreading adenovirus or influenza far & wide at school or daycare just because their parents can't afford to stay home from work a couple days with them.  Public school is not your babysitter & kids (as well as adults!) deserve to rest & recuperate at home when under the weather.  Never mind the effect it would have on transmission of these preventable contagions if we isolated ourselves while acutely ill.

We shouldn't wait for a new pandemic like COVID-19 to apply social distancing & universal precautions like hand washing or covering your cough.  If we'd been employing basic hygiene to start with, this and other new diseases never would've gotten off the ground in the first place.  That said, there's only so much we can do at an individual level before our government has to step up & apply things like paid sick leave, universal healthcare, moratoriums on rent/bills while under mandatory quarantine & other measures to close the gap.  Otherwise sick people will continue leaving their homes to go to work, school & other places out of sheer necessity.  And that's not good for any of us, even the wealthy 1% at the top (see: the current stock market plunge).  Whether your primary concern is health or money, you'd do well to be proactive instead of reactive in matters of public health.
at March 13, 2020