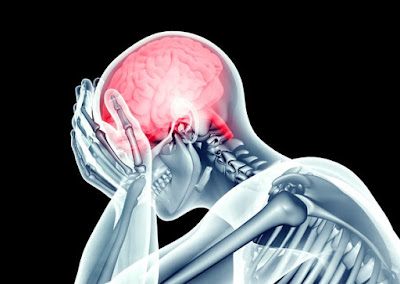 After going down a rabbit hole of Chronic Traumatic Encephalopathy (CTE) documentaries, I'm noticing a pattern:  the condition is being labeled as various mental illnesses like bipolar disorder, depression & even schizophrenia in patients shortly before they die & get "correctly" diagnosed with CTE at autopsy.  This means one of two things:  either CTE mimics these diverse mental illnesses almost perfectly, or head trauma is capable of actually causing these illnesses.  If it's the former, CTE is the new Great Imitator, perfectly mimicking conditions as diverse as ADHD, depression & paranoid delusions.  If it's the latter, that means psychiatry has been wrong about the causes of said mental illnesses for a long time.  At least in some people.

While they always lead with the caveat that the cause of mental illness is "not fully known," scientists usually attribute depression, anxiety & other psychiatric disorders to a combination of genetics & environment.  "Environment" generally refers to one's upbringing, experiences such as childhood trauma and other external stressors.  In theory it may include things like drug or alcohol exposure in the womb or lead poisoning, but it's exceedingly rare for psych doctors to ask about biological risk factors like head trauma in practice.  That's a huge missed opportunity to learn about the causes of mental illness if nothing else.

The chemical imbalance theory of depression, for instance, has been pushed on the public for years by pharmaceutical companies with a financial stake in selling medications that correct these imbalances.  While these meds work for some people (I've taken Prozac for over a decade), they're rarely sufficient by themselves for treating mild to moderate depression.  In fact, SSRI's like Prozac performed little better (and sometimes worse) than placebos in several trials.  Yet they're still the "golden standard of treatment" for depression along with talk therapy.  But what if your depression is caused by trauma to the part of the brain that controls mood rather than an emotionally traumatic childhood experience or a serotonin imbalance?

Maybe the problem is that, what we label depression is not one disorder but a vast collection of different ones with unique causes?  In reality there are 9 known types of depression with almost contradictory sounding symptoms.  As an example, here's a comparison of the symptoms of two types of depression.  The ones in red ones belong to Major Depression & the blue ones to Atypical Depression:  Insomnia/Hypersomnia; Weight Loss/Weight Gain; Anxiety/Anhedonia; Appetite Loss/Overeating.  And despite the name, Atypical Depression is the more common of the two.  It's also harder to treat and much more common in women, possibly having a link to thyroid dysfunction.  Imagine how many other "types" of depression--not to mention other mental illnesses--exist that we haven't identified yet!

CTE on the other hand is a type of fatal, progressive dementia.  Dementias are known for their effects on memory, judgment & cognitive ability.  So why does it cause such stark symptoms of mental illness in addition to cognitive impairment?  Alzheimer's Disease doesn't generally cause people to become volatile & violent or develop frank psychosis like CTE does, but some other types of dementia do (Frontotemporal Dementia, for instance).  Simply put, the brain controls personality, mood, cognition & everything that determines all of our behavior.  When we damage it repeatedly, it can understandably cause problems.  But some people still don't fully understand this, hence the high prevalence of physical abuse of children, domestic violence, contact sports, war & other types of head-trauma inducing violence in our "civilized" society.  The cost of this on our society is as high as any of the major diseases we face today.

Dark Side of the Ring: Chris Benoit


Head trauma has long been a known risk factor for committing violent acts up to & including mass murder.  In fact, it's part of the triad of factors along with autism & a history of child abuse that is cited as a potential contributor to this type of anti-social behavior.  Obviously, not everyone with these risk factors goes on to commit murder, but it's interesting to note head trauma's role.  Infamous serial killers Gary Heidnik, Bobby Joe Long, Henry Lee Lucas & Richard Ramirez all incurred serious head injuries prior to committing their crime sprees.  For Bobby Joe Long, it was a single motorcycle accident that his family members say changed his personality forever while the others were all repeatedly hit in the head during childhood.  (Oh, and you can pretty much be sure any famous serial killer served in the military prior to starting their killing career.  Correlation doesn't equal causation, but war is the source of many a head wound so you can't overlook its role, or that of PTSD, in causing violence here at home).

Because "CTE" is widely considered a sports-related illness, these cases tend to be overlooked or not connected with the phenomenon.  That needs to change.  How many women & children are on the path to developing CTE or other dementias due to head trauma at the hands of domestic abusers?  How many soldiers in warzones will come home with not only the severe burden of PTSD but also the added effects of a head injury?  How many suicides--and homicide--will result?

One question science hasn't answered is whether there's a condition that mimics CTE but doesn't progress to the fatal form.  Many athletes appear to have some degree of the disease yet have lived to ripe old ages (OJ Simpson, Mike Tyson & many others).  CTE is 100% progressive & fatal and its sufferers die at an average age of 51, though they certainly live longer than that in some instances.  These folks make it clear that, even if you don't get full-blown CTE that kills you, repeated head trauma can still eff up your quality of life in a big way.  And perhaps they'll end up with ALS or Parkinsonism in the future as a manifestation of the damage they incurred all those years ago.  (Yes, these terrible diseases have also been linked to CTE/head trauma; see this Wikipedia list of NFL players with ALS & CTE).

The problem with diagnosing CTE in living people is that it's invariably fatal and can't be confirmed until autopsy.  Neurologists can be reasonably sure using imaging & taking a medical history, but it's still iffy in the ethics department to give a terminal diagnosis when there's no way to know for sure someone has it.  Just don't go diagnosing yourself and doing something drastic.  Get a second & third opinion about what's going on with your brain health because there are things you can do to manage symptoms in some cases.


To wrap this up, the old adage that violence begets violence or waxing poetic about "generational curses" may have more of a biological basis than we ever realized.  Sure, we learn how to behave from the role models around us, but sometimes these lessons are literally beaten into our skulls from an early age as well.  My own dad uses the phrase "I'll knock some sense into him!" as if hitting someone in the head will make them smarter.  Yeah.  Not how that works.  Just the opposite, actually.

Do you know somebody with traumatic brain injury that resulted in mental illness or a major personality change?  Would love to discuss in the comments.