Regarding the George Floyd Murder 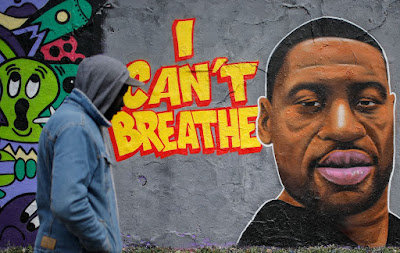 So much has already been written about this subject I don't feel there's much I can add besides my opinion, and those are a dime a dozen.  Like assholes, everybody's got one.  What makes MINE special?  Nothing.  But maybe I can contribute to the conversation by sharing something people can relate to in some small way.  A life raft for people in the same boat.

I live in a red state in the Bible Belt with a family that routinely spouts racial slurs & doesn't "get" the point of all this "looting and destruction".  While I haven't been directly involved in the protests, I'm subjected to hateful talk about the situation daily.  We've already had several screaming matches that have ended with me bawling in my room & them fuming about me under their breath.  It's painful, even though I'm white as Casper, to hear the n-bomb dropped liberally (the ONLY thing liberal about my parents is their use of that word) in the immediate aftermath of the slaughter of innocent Black people by police.  It makes me question how I could've descended from these people biologically or environmentally...how we could be so similar looking yet continents apart ideologically.  In short, it fucking hurts.


But not nearly as much as it must hurt to see people who look like you or your precious children getting assassinated on the street every other day by those in power.  Those who should be held to higher standards yet are getting away with murder.  Whether it's drug war fallout, diseases like Covid-19 or police brutality, Black people bear the brunt of it in America.  Always have.  And they've tried every peaceful method of begging & pleading with the system since Day 1 to almost no avail.  Being third-class citizens in a country your ancestors literally built is not something you can relate to as a white man or woman--even if you're dirt poor--so if you don't have anything constructive to say about this situation maybe you should sit this one out.

Worse yet, my loved ones are talking about police like THEY'RE the victims.  The same police who are decked out in full riot gear & look indistinguishable from a standing military.  I'd sure as fuck prefer to be a cop in a riot than an American nurse in a hospital during a pandemic.  All they have are trash bags & reused masks for protection against a novel deadly virus.  Meanwhile, our police are lobbing teargas & flash bangs with their giant shields up while marching in steel toed boots like a state-funded militia.  To the rest of the world we must look like a police state similar to authoritarian China.  Many cities have even deployed the National Guard in addition to police marching in the street.  It's shameful.  All for something that could've been prevented had 4 crooked cops been arrested at the scene of the George Floyd murder.  Compare this to the paltry response to the Covid pandemic a few months ago & you start to see where our government's priorities lie.

But America loves to victim-blame, so they focus on isolated incidents of looting & vandalism among the largely peaceful protests, their condescending instructions on "how to protest correctly" ringing hollow in the ears of victims who have tried it their way for 200+ years & gotten nowhere.

Despite the scale of the uprising, the majority of us are witnessing it from afar & trying to digest the fallout from the safety of our homes.  Yet many of us have had conflict with those who don't agree with our take on the issue which is taxing psychologically.  Online trolls are one thing but when it's your own friends or family it can really make you question these relationships.

How many of you know what it feels like to win an argument with one of these cruel fascist sympathizers only to have them resort to personal put-downs?  Nothing is off limits:  looks, disability, career missteps, relationship status, sexual history, addictions, past traumas & anything else to make you feel small.  It's the same tactic as those who tell protesters to "get a job" or "give back their stimulus check," as if anyone who makes time to protest their oppression must surely be unemployed & shiftless.  The only thing "lazy" is their debate skills.  Resorting to ad hominem attacks is the oldest & dumbest trick in the book, so don't take it too personal.  After all, that's what they're counting on.  Take a few deep breaths & keep your cool.

Always remember:  your peace is more important than trying to win an unwinnable argument.  As Bill Murray once said "Winning an argument with a smart person is hard.  Winning an argument with a stupid person is impossible."  While it's important to fight racism & other forms of injustice, you have to know when to throw in the towel for your own health & sanity.  Some people just can't be reasoned with due to a lack of neuroplasticity, willingness to grow or plain old prejudice.  When the issue is lack of understanding or exposure to other world views, there's hope.  When it's stubbornness due to a hardened heart and feelings of entitlement or superiority, there's not.

Leopards don't change their spots.  This is a painful realization when those "leopards" are our loved ones.  And it's a hard task determining who's truly a leopard vs. an ignorant, well-intentioned person who just needs some perspective.  This is where therapy comes in handy.  You can either learn to love them AROUND their prejudices or cut them off completely & move on.  Your call.  There is no right answer.  In some cases they may actually cut you off for not agreeing with them.  C'est la vie.  Again, therapy will likely be instrumental in helping you grieve & do the heavy lifting of moving on without them.

It's a fine line trying to decide when to interject & when to let sleeping dogs lie or simply walk away from hateful people in your personal life.  Change begins at home so do your best to choose a partner who shares your views on the important issues & instill these views in your children while also teaching them to think critically & stand up to authority when necessary.  You may not be able to change your parents or grandparents but there's a lot of hope for the younger generation.

During collectively traumatizing times like this it's vital to make time for self-care, be it through meditation, therapy with a trained counselor, journaling or other de-stressing methods.  You can't change the world if you aren't healthy yourself.  And above all else, ensure your physical safety as much as possible if you're going to participate in the protests directly.  Wear a mask to reduce the risk of contracting Covid & take other precautions like those shown in the graphic below to protect against teargas & other potential dangers.  Your life matters. 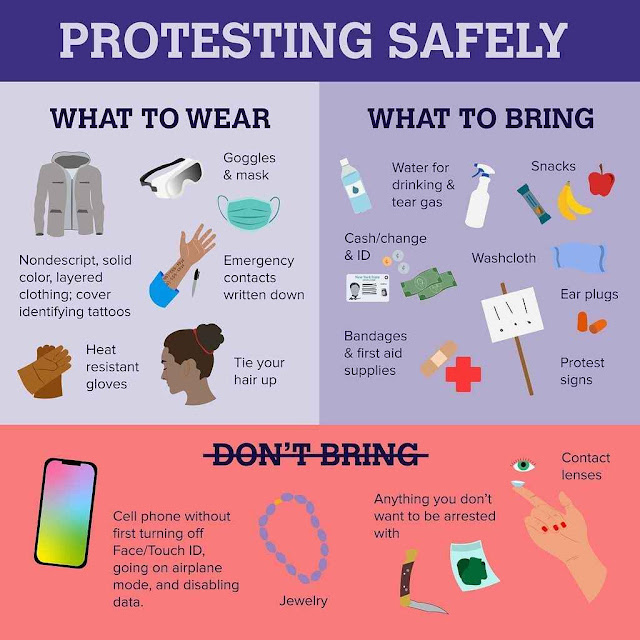