Blueberry Headband is an Indica-dominant hybrid that's less famous than either of its individual namesakes...neither of which is used to make the most popular phenotype of the strain.  While there are many renditions, the most popular was created by NorCal's Emerald Triangle Seeds & is not a simple cross between Blueberry & Headband but between 4 different strains ('76 Blueberry, Emerald OG Kush, Cali Sour D & Pre-98 Bubba Kush).  The aforementioned strain is a 50/50 hybrid with balanced effects that lean slightly energizing.  My cut purports to be 70/30 Indica dominant so I'm not entirely sure which version I've got.

Blueberry Headband is popular in Colorado according to Denver-based Westword Magazine.  My sample comes in at 21.6% THC & is rich in b-caryophyllene, humulene & terpinolene.  I paid $5 for a half-gram.  The nugs are dense & cone-shaped like little Christmas trees, and the smell is soft & floral with dank earthy undertones.  Unlike some of the other strains I picked up, this one is dried & cured optimally & has nice bag appeal. 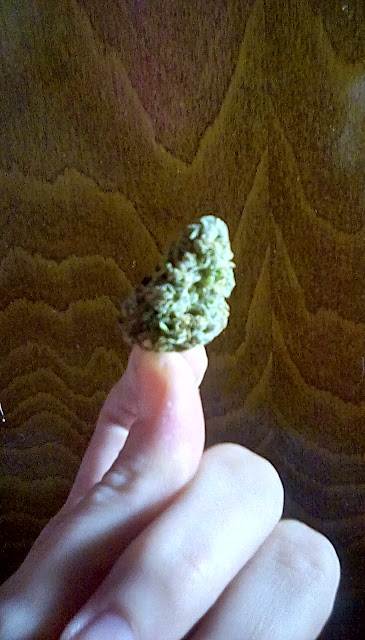 The taste is actually kinda pleasant--herbal but not too green or grassy.  The joint burnt fast but I was able to get sufficiently stoned anyway.  The effects are heavy & hit behind the eyes initially (probably where the 'headband' moniker comes from).  I feel dreamy & moderately couchlocked, though I did feel a bit sleepy before smoking already.  I could see myself eating a big meal & drifting off to sleep after a bowl or joint of this.

The comedown was honestly pretty drowsy & ass-draggy for me, but again, I'd just eaten a big meal so I don't know how much was due to the weed.  I'm not a fan of sleepiness since I already struggle with chronic fatigue so that's a big negative, but if you like a strain that'll send you into sleepyland this should do the trick.  The eye pressure was kinda unwanted too since I have migraines but it wasn't anything too extreme.


Upon first review I'm giving Blueberry Headband a 4.6 of 5 stars for effects alone, though the bag appeal, taste & cure were impressive.  My opinion could very well change with further samplings so please check back.  (This happened with the Golden Goat & East Coast Diesel strains to the point I changed their whole ratings).  As with psychedelic trips, weed experiences seem to be based as much on a person's mood & setting as the product itself.

This is a solid strain that gets the job done much like 3-point beer will get you drunk but there's just not much 'soul' to it.  Some hybrid strains be like that.  At least the price was right.  We'll see what future sessions will reveal about Blueberry Headband.  Check back for updates.