Maui Wowie is a vintage sativa-dominant strain that originated in the 1970s on the Hawaiian island of Maui after which it’s named. The strain has been cultivated for more than four decades & can reach over 10 ft. in height.  It has herbal, pine & peppery terpenes according to Leafly.com which are said to give an almost tropical pineapple flavor.  Before Maui Wowie, weed was stuck in the single-digit THC range for the most part.  The strain was a revelation for the hippies who ended up partaking in Hawaii with the locals during a big party on the island of Maui.  It tends to have around 15% THC on average.

This is the first "classic" strain I've ever tried which is exciting.  I've always fetishized landraces for their vintage appeal.  They tend to be harder to grow, taller & take much longer due to their sativa-dominance & are thus less common these days.  Technically this is NOT a landrace but a direct descendant of the "Hawaiian" landrace strain (that's literally its name).  Still, the Wowie is old & unique enough to be considered a near-landrace by most heads.  Hence the "classic" designation by me.  It's certainly older than most of today's strains & comparable to classics like Haze or Skunk #1. 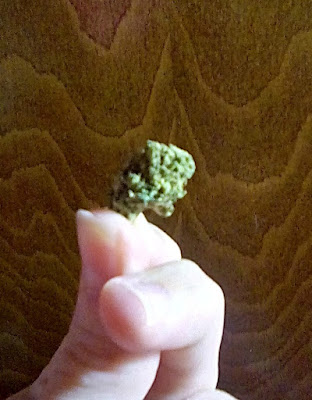 This Maui Wowie was sold at a discount at the dispo & didn't look too impressive on the website but nevertheless, I persisted.  It grows naturally in the lava-rich soil of Hawaii & is said to produce a euphoric, relaxing high that goes great with surfing & other beachy activities.  My cut claims to have 24% THC, 0.04% CBD and is rich in myrcene, b-caryophyllene & limonene.

Anyway, the smell is pretty stale.  Appearance is downright poor, with the nugs being harder & crispier than the hemp buds I've currently got.  They're also small af.  But they were cheap ($2.50 for half a gram and $5 for a gram) so I wasn't expecting much.  But at a medical dispensary you should probably have higher standards than this.  I don't know if it's overly dried or what but I'm not impressed with the bag appeal.  And for some reason I decided to pick up a full gram rather than half a gram of this.  Ugh.  I guess the effects will either speak for themselves or not.


As always, I roll up some weed in a joint...this time with about 50/50 Maui Wowie and hemp flower.  I put a little more cannabis (THC) in this time since it looked so weak.  I spark up around 5 p.m. on a day that's 103 degrees in the shade with terrible wind & humidity.  Blech.  Surprisingly, the joint burns pretty evenly despite the wind & the super dry texture of the bud.  I feel my cramps melting away by the end of the roach.  The THC content seems to have not been an exaggeration--this feels more potent than the Durban Poison which came in at 20% THC but this joint was also fatter & contained more weed.

The effects strike a nice balance between mellow & uplifted.  I can feel my uterus cramping but my brain doesn't care.  This seems like the ultimate summertime strain if there was such a thing.  Puts a smile on your face & a spring in your step.  It's classified as a "morning" strain on Wikileaf but I actually find it more fitting for the afternoon or even sunset.  There's definitely a chill edge to it, but not in a way that will put you to sleep like a full-on indica.  You just may not feel like cleaning your house or running errands after a few puffs.

Overall I give Maui Wowie a 4.8 of 5 stars for potency, effects & price.  The bag appeal is absolute garbage but the effects are what count.  I recommend this strain for anyone who enjoys a cheerful, sunny Sativa or just wants to try the classics.  They're classic for a reason & you can't call yourself a connoisseur if you haven't experienced them.