Identity vs. Reality: A Response to the JK Rowling Insanity 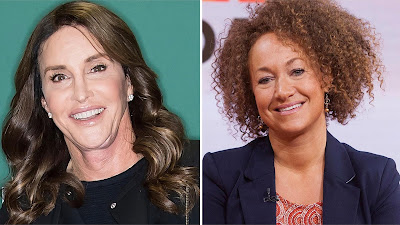 Trigger warning for you sensitive souls.  This post contains what some will undoubtedly label "transphobia".  By definition, transphobia means "dislike of or prejudice against transsexual or transgender people" (thanks, Google) so I strongly disagree.  I do not view trans people as lesser human beings & nothing in this piece implies that they don't have a right to exist.  It also contains intimate details about myself & MY identity that I've never shared with anyone so consider that before dragging me.  Or go ahead & wish death on me.  Whatever floats your boat I guess.

I know what it's like to feel like you were born in the wrong body.  That your race & even your sex are not aligned with how you feel deep in your soul.  Like the roles society has imposed on you are 180 degrees backward from who you are at your core.  Not just how you feel but how you present on the outside, to the point that your peers & even your family mock & bully you from a young age.

When the music, clothes, literature, film & other forms of art you consume don't match your skin tone or where you come from (rural South), you face ridicule & exclusion that's both subtle & overt.  When your friends & romantic partners don't "match" your skin tone in a place like where I'm from, it might as well be Hell on Earth.  That is to say, none of this is a choice.  It's who I am.  Life would be a lot easier if I was not a lesbian attracted to Black culture in a very white part of America, or if I weren't a leftist in a red state full of Trump supporters.  Hell, sometimes I don't even identify with human beings due to my autism & social anxiety.  But that's another topic for another day.

Don't get me wrong:  I'm no Rachel Dolezal or Shaun King.  But the very fact that these race poseurs exist (Google:  "Blackfishing" for more examples) speaks to the pervasiveness of the phenomenon.  People identify differently than they present quite often.  It's a thing, and the Dolezals, Kings & Jessica Krugs of the world are just the tip of the iceberg.  I suspect it's a spectrum like most things.  You see shades of it in the white people who lay in tanning beds or under the harsh UV rays, risking cancer to look less white and the Black people around the world who bleach their skin with mercury-laced creams to look less Black.  Talk shows like Ricki Lake & Jenny Jones were featuring "ashamed of my race" guests way back in the '90s so it's nothing new.  The grass simply looks greener on the other side of the racial fence for many people.

The problem comes when folks actually attempt to pass themselves off as something they're not.  This is universally denounced as offensive & dishonest, and rightfully so.  At least with race.

Gender/sex gets a special pass, however.  Men who call themselves women & insist that others go along with their belief while pushing their way into women's safe spaces--bathrooms, changing rooms, women's sports, rape crisis centers & prisons--places that are female-specific for a REASON, are considered the oppressed class & given free reign to do just that.  Any woman who objects is called a "TERF" or thrown in the pile with backward conservatives.  Upwards of 80% of these transwomen retain their male genitalia, which makes them capable of impregnating & transmitting serious STI's to women in addition to raping them.  Anyone with half a brain could see why it's a bad idea to lock women up in confined spaces with male-bodied people, but in case you have doubts, check out this well-sourced website featuring real stories of trans-inflicted violence.

The kneejerk reaction these days is to label these views as 'transphobic', but I would argue that nothing I've said is hateful or bigoted at all.  Rather, they're dry statements of fact that reflect the real danger women & girls face when feelings are prioritized over biological realities.  I might identify with Black culture, music & history but that does not make me Black in any capacity.  I'll never know what it's like to be profiled by police or followed in a store like I'm stealing because of my skin color.  And I might've strongly wished I was a boy growing up because sexism made me feel inadequate & powerless (and still does at times).  But I'll never BE a man, even if I were to take testosterone & have surgery to alter my genitals.  I was not raised or socialized as a male, and I didn't go through male puberty.  I don't have XY chromosomes, sperm or testes.  For all the benefits of being male, there are also drawbacks:  Men get drafted into the military, die a few years younger than women on average, complete suicide more often than women & are more likely to have a drug or alcohol problem.  I'll have to settle for being a gender non-conforming lesbian in a man's world.

Likewise, someone raised & socialized as a male will never know what it's like to be a woman.  To face the horrors of female genital mutilation, die in a menstrual hut or live with a 1 in 3 lifetime risk of domestic violence at the hands of her partner.  These things don't happen as a result of gender identity but the biological reality of being female--something we can't identify out of when times get hard.  Endometriosis, lower pay for equal work, sexual assault, miscarriage, reproductive rights restrictions, misogyny, a 10:1 rate of autoimmune disease compared to men, honor killings, exclusion from medical studies & countless other forms of female-specific suffering are unique to us and our bodies.  Calling yourself a woman when you'll never have to face them is an insult.  Read that again.

If you disagree with my stance, which many of you undoubtedly will, that's fine.  Feel free to leave a comment stating why or just ignore this article.  But I implore you not to stick your fingers in your ears and "cancel" me based on this one article.  People should feel free to share opinions respectfully without being silenced or shunned.  Note:  I'm not promoting violence or discrimination towards anyone.  Trans people deserve their own safe spaces & equal rights in the workplace, housing & public sphere.  They deserve the right to marry whomever they want & adopt children if they so choose.  All the things everyone else is entitled to.  It just shouldn't come at the cost of women's hard-earned gains.

For those who are confused:  nobody's accusing trans people of hiding these cameras or doing the raping.  But valuing "gender identity" over biology opens the door for ANY male rapist, fetishist, narcissist, pedophile or pervert to access our spaces based on how they identify.  This is not a slippery slope argument.  It's already happened.  Google Jonathan Yaniv if you haven't heard of him already.  While you're at it, Google "cotton ceiling" & check out /r/actuallesbians on Reddit.  Despite the name, the subreddit is moderated mostly by transwomen (aka males) & chock-full of dick jokes or references to 'ladydick'.  Ditto for /r/TwoXChromosomes.  I shit you not.  And don't dare go to /r/Lesbians looking for genuine woman-to-woman discourse...it's just pornography.  Lesbians have no home.

The radical feminist Gender Critical subreddit was recently shut down despite following every rule to the letter, as was the LGBdroptheT sub.  Yet countless pro-rape & misogynistic subs remain.  And the other day, #RIPJKRowling was trending on Twitter with posters saying they wished she was dead or pretending her work was written by other people.  All because she said people who menstruate used to be referred to as "women".  If you think this is acceptable, you might want to evaluate your definition of fair & normal.  I've never read a JK Rowling book or seen a Harry Potter movie but I must applaud her for stepping out on a ledge in this climate of anti-female censorship & putting her reputation on the line to stand up for us.  Read her full statement on the issue here.

If you believe souls are gendered, that's fine.  Like a religious belief, you're entitled to it.  But we have freedom of religion in this country which means you can't impose that belief on others.  Someone claiming to be another race is scientifically closer to the truth than someone claiming to be the opposite sex, as race is literally only a set of superficial characteristics like facial features, hair texture & skin tone with no hormonal or other underlying differences.  Sex, on the other hand, has a very real basis in genes, chromosomes, hormones & every cell of the body.  Obviously it's fraudulent & absurd to lie about your race so fuck you if you do that.  But our reaction as a society to these two forms of cosplay is ass-backwards.