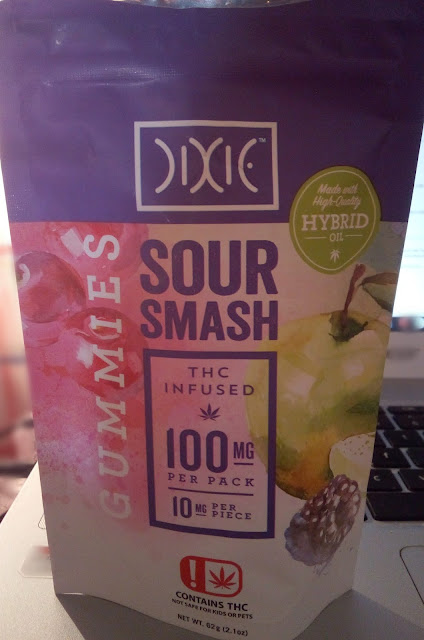 Y'all know I love my Dixie brand candies.  I've already reviewed their tangy Tarts & 5-star Berry Blast gummies so I had to pick up some more on this trip.  I opted for a different flavor just for the sake of this review (you're welcome).  Could've easily got the same amazing berry ones as last time.  Apparently the flavors are coordinated to the strains, i.e. "Berry Blast" only comes in Sativa, Sour Smash only in Hybrid, etc.  I prefer Indica edibles as Sativa are way too panic-inducing in edible form, though I tend to prefer Sativa leaning flower.

Anyway, the Sour Smash candies did not disappoint.  They're potent & tasty as usual, though not quite AS tasty as the Berry Blast flavor in my opinion.  But a very close second.  I think they're cherry & green apple flavor--the candies themselves are red & green and those are the fruits featured on the bag.  (I checked the website & they're Sour Cherry, Sour Apple & Berry Lemonade).  They're indeed sour but not as much as the Tarts.  I'm tempted to overindulge based on the yummy taste but know better by now, lol.  The high is powerful...more so than the Tarts for some reason despite being the same 10 mg per unit.  Each bag contains 100 mg with 10 candies; each serving contains 20 calories.  (Correction:  The independent analysis sticker says each bag actually contains 130.3 mg THC, with each candy containing 13 mg THC).

I give Dixie Sour Smash Hybrid Gummies a 4.9 of 5 stars for taste, potency & price.  Flavor is bangin' but I wish all their flavors came in Indica.  Hybrid isn't too far off though.  The price is right and so is the tartness.  These didn't seem to have as much of the powdery coating as the Berry Blast but no matter--the flavor wasn't affected.  The blue & green candies look so similar I didn't notice there were 3 colors so I look forward to trying the Berry Lemonade one.  Really wish my tolerance was high enough to eat a whole bag like a normal person but that will never happen.  I suppose it saves money this way.