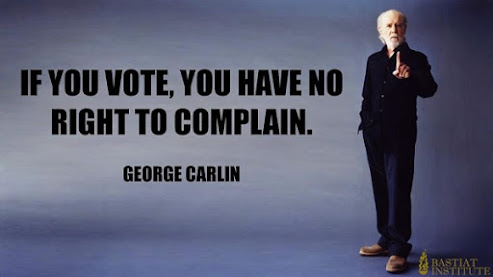 It's not a popular opinion but I'm sharing it anyway.  In 2016 I raced to the polls to register & stand in line until the polls closed only to vote for "None of the Above" for president, as my candidate was not on the ballot in my state.   But I did it because I was desperate to make it known that neither of the 2-party options was suitable.  The whole 2016 election felt like a circus.  A sham... a lowering of the bar to embarrassing levels beneath where even Palin's airheaded idiocy had taken us in 2012.

That's also the case this year despite moving to another state--my candidate is not on my ballot & neither "mainstream" option is acceptable to me.  Biden is in fact slightly worse than Clinton.  And Trump is the most evil neo-fascist moron since Hitler.  After extensive research into alternative "backup" options to Howie Hawkins (Socialist Party, Bread & Roses Party, etc), I've discovered none of those are on my ballot either (and can't be written in).  To make matters worse, mail-in voting is not an option here without first having your ballot notarized in person, exposing you to the virus & thus nullifying the purpose of mail-in voting.  So I've decided to abstain from voting for president this year.

You read that right.

Despite the 24/7 push on social media, television, radio & elsewhere to VOTE like your life depends on it, I'm bailing.  Judge me if you want but it's my decision.  It's not one I make lightly.  If you live in a firmly red or blue state like I do, your vote does not count.  READ AND COMPREHEND THAT.  Understand the Electoral College system & how swing states work.  1 person does not = 1 vote.  There are countless other reasons but this brilliant Medium article articulates them better than I ever could.  Here's a snippet:

"Democrats love to wag a finger at people who don’t vote, instead of looking in the mirror at why people who are marginalized but able to vote (are not incarcerated, can afford an I.D, have an address to send a ballot to, have a polling place near them, are able to take time off, etc.) still decide that choosing not to vote is better than supporting them."

Mmm-hmmm.  In addition to all that, it makes no sense to risk your literal life to vote in person for a party/candidate that you don't truly support or believe in with coronavirus surging.  If ever there was a year to not settle for a "lesser evil," it's 2020.  After a fiery summer of police brutality protests & what's shaping up to be a dark winter of COVID death, voting feels like pissing in the wind.  At least until we get some more viable candidates to vote for, which will never happen as long as we keep settling for this endless cycle of right wing (Democrat) and far-right wing (Republican) figureheads.

By all means, if you feel strongly about Biden or Trump get your ass out and vote for them.  And if you can vote 3rd party in your state, do it.  It will help get the party to the 5% needed to get federal funding & secure much-needed ads, debate time & exposure next election.  But stop telling other people how to exercise their rights in this regard.  There are many reasons people don't (and can't) vote as noted in the Medium article linked above (seriously, read it).  Voting is a deeply personal matter; you don't get a fucking say in how--or whether--I go about it.  That's a vital part of democracy, remember?  Some of you apparently want a fascist dictatorship in which people are forced at gunpoint (literally or metaphorically through bullying & shaming) to vote for the 2-headed corporate hydra every 4 years.  Because let's face it, you're not intending for people to vote 3rd party when you're flashing those "Vote, Dammit!" ads or wagging those fingers in our faces.

At this point we should be focusing our energy on general strikes, unionizing, rent strikes & other real forms of class solidarity in the midst of this pandemic & economic crisis.  The fact that all anyone wants is to go "back to normal" and vote for more of the same 2-party bullshit that got us here means we haven't grasped the gravity of our situation yet.  Things will continue getting worse--much, much worse--for the average working class person before they get better.  Normal was killing us.  Not just "us" Americans but every person & living thing on the planet.  COVID is small potatoes compared to the threat of climate change and its attendant issues:  climate refugees, species extinction, famine, drought, rising sea levels, wildfires, insect plagues (increases in ticks, locusts & mosquitoes) & other problems we can't even fathom yet.  New diseases that make COVID look like the sniffles.  And our so-called "liberal" politicians are still supporting fracking and dissing the Green New Deal.  Let that sink in before lecturing me about the lesser evil.

In other words, fuck the vote.  Get your shit together & realize the sun doesn't rise & set on the Democrat & Republican parties of the USA.  Whoever is elected, the world will still be spinning on November 4th, 2020.  You need a plan for holding politicians accountable once they're in office instead of making excuses like "we can't afford to criticize Biden this close to midterms" or whatever.  If Trump wins, the same goes for him.   Both sides make excuses for their "guy" instead of holding them accountable.  You should be MORE critical if the person you voted for wins.  Your vote is your highest endorsement, after all.  They wouldn't be in that position without you.  They owe you.  They owe ALL of us.  Stop putting politicians on pedestals.  They're not role models or Hollywood stars.  They're public servants.

...and if I hear ONE MORE person appropriate the term "harm reduction" from its original legitimate use in the substance abuse/addiction community & apply it to voting for these evil fucks, I'm gonna puke.  Stop that shit.  Voting is not harm reduction.  A car wreck at 70 mph isn't materially better than a wreck at 90 mph, especially if the EMT's and other rescue crew are out to brunch when the 70 mph wreck happens because "their guy" is in charge & they can't be arsed to respond to the call.