For all the coverage of the Biden/Trump race, one story flew under the radar:  the American war on drugs took a historic hit on election night.  Yuge. 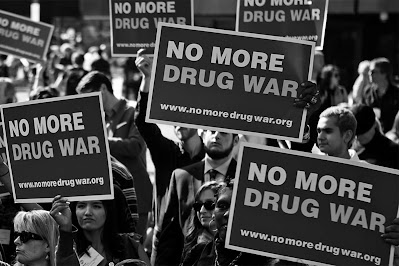 This one is the kicker.  Oregon took it one step further, decriminalizing ALL drugs including "hard" drugs like meth, heroin & cocaine in small personal amounts.  They're the first state in the nation to do so and now in the company of very few other countries like Portugal which has experienced mostly positive effects from decriminalizing drug possession.  Oregon is also allocating more money for drug treatment programs & other harm reduction measures which will complement the policy nicely.  Time will tell how this plays out but if history & scientific data are any indication, the results should be excellent.

Nothing is to be gained by locking up non-violent drug addicts & users except money for the prison-industrial complex & police departments.  But even that money & those jobs can be funneled to the drug treatment & education industry if we simply focus our will there.  And lord knows communities can benefit from police focusing their efforts on violent offenders like rapists, child abusers, pedophiles, domestic abusers, human traffickers, animal abusers, terrorists, murderers, etc.  That's who our prisons should be filled with; not people exploring their consciousness or desperately trying to self-medicate their trauma with drugs.

For those concerned about things like drugged driving, child neglect while high, date rape & other peripheral or downstream effects of drug use, don't be:  those things are still 100% illegal under the new law.  As they should be.  It only applies to possession of small personal amounts of drugs, NOT drugging other people or abusing/endangering others.  Prison never prevented drug abuse anyway--it wasn't meant to.  Evidence-based treatments like the ones funded by the new laws do.

So yeah, HUGE BLOW TO THE DRUG WAR.  No matter who you support on a presidential level, we can all agree that's a good thing.