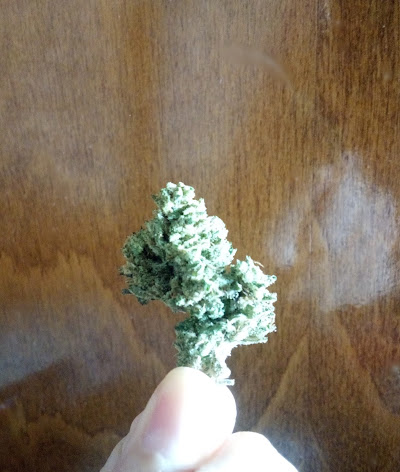 Perhaps the most well-known strain of all time, Acapulco Gold was an all-star of the 1970's but existed in the U.S. as early as 1964, when it was entered into the Oxford English Dictionary & described as "a special grade of cannabis".  Its origins are a mystery but it's thought to hail from the Guerrero mountains outside the city of Acapulco, where it was grown in the humid Gulf breezes & dried with the wind from the Pacific.  It was highly coveted for its soaring THC content, which could reach 20%.  In the days when average weed rarely exceeded 5% and hovered closer to 1% in many places, this was nothing short of mind-blowing.  Unlike today's Mexican brick weed, the Golden era strains from that region were considered some of the best with Acapulco Gold taking the cake.

Unfortunately, the reign of the heady Mexican strains was pretty much over when Reagan took office and the paraquat spraying campaign in Mexico took off in earnest.  According to the Washington Post, poisonous paraquat turned marijuana a golden yellow color, making it paradoxically more desirable and allowing dealers to mislabel it as "Acapulco Gold".  Other low quality strains were already being mislabeled as this famous strain to boost their market value and eventually Acapulco Gold's popularity wore thin due to this diluted reputation, but not before it was used to breed some classics like Skunk #1.

My sample has no cannabinoid or terpene info which sucks.  I feel that medical dispensaries should always offer this information, but the price was right and they didn't charge tax so I'm not really complaining.  The smell is similar to lime Skittles with a hint of sage and moderate pine notes that come through when broken up.  The buds are pretty typical sativa:  more on the lanky-but-bushy side with more green than other hues.  Like a Christmas tree.  As with the Colombian Gold, you can see that my sample looks NOTHING like the 1970's version shown in the picture above.  And thank goddess for that.

Thankfully, this strain has less of an overwhelming psychedelic effect than the Santa Marta Gold, though there are similarities.  It's more euphoric and uplifting without the jaw-clenching edginess and laser focus bordering on paranoia--I can just chill and enjoy the music from my bed.  My body feels light and less painful than before (I was a big headachey due to the overcast weather and hormonal hangover, but that's gone 10 minutes after lighting up).  This is actually pretty nice for a sativa.  I was hesitant to try it and saved it until last after the Santa Marta was so "classic sativa" and blew my head off.

I'm less impressed with the major munchies I get right off the bat, which are a typical sativa side effect.  Not helpful for my calorie conscious diet.  I scarfed down a whole pizza and could've kept going but used all my willpower to stop and distract myself with an episode of Teen Mom (don't judge).

This strain would be good for anyone seeking an upbeat morning toke that's not too tweaky.  Medical uses would include low appetite, spasticity, depression and ADHD.  Nothing stands out about the effects but it's worth trying if you're a cannabis historian or connoisseur looking to get into the mindset of '70s-era stoners. It's always good to know what all the hype was about, and in the case of Acapulco Gold it was definitely worth the hype... especially when you consider what they were working with at the time.

Overall I give Acapulco Gold 4.7 of 5 stars for effects, rarity and potency.  If it comes your way, don't pass up the chance to try it particularly if you're a happy sativa fan.  If you want a more stimulating, laser-focused landrace, opt for Santa Marta Colombian Gold.