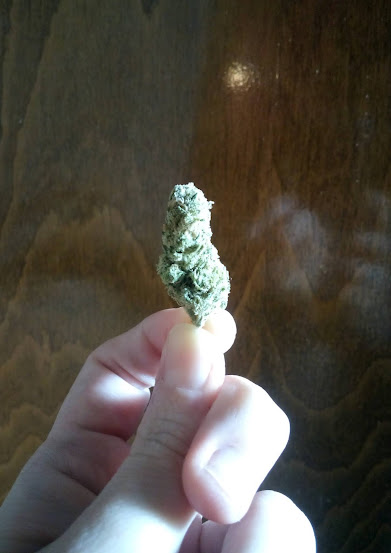 And now for my favorite strain of this run:  Chernobyl.  It's not rare or a landrace but is new to me so definitely had to review it.  Chernobyl is a sativa dominant (80%) strain made by crossing Trainwreck with Jack the Ripper and Trinity.  It was created by The Dank and is named for the infamous nuclear reactor in Ukraine that melted down in 1986.  Not the most sensitive name but quite apt in terms of effects on the brain.  Terpinolene is the dominant terpene according to Leafly.com.

Unfortunately my cut has no terpene, CBD or THC info.  The buds are long and lanky like a true sativa with lots of visible frosty trichomes.  Since this dispensary packages their weed in baggies rather than bottles, they get compressed which makes for less attractive photography.  The smell is mouthwatering, akin to the zest of a freshly cut lime with a very sweet, acidic lingering aroma.  Reminds me of a cold limeade on a Summer's day.

The effects are the true highlight though.  While I'm usually not a sativa fan, Chernobyl doesn't feel like a straight sativa.  It's more balanced and manageable, giving me 60/40 hybrid vibes.  It's an instant mood brightener that induces giggling and a boost of energy and clarity in the head, relieving pressure behind the eyes.  It's similar to Golden Goat in a way:  Playful, upbeat and giddy weed that makes you want to adventure and have fun.  Glad I picked up 2 grams.  They substituted it for Chocolate Thai which was out of stock--the one strain I REALLY wanted to review.

I could see this being great for depression, ADHD or any condition that causes fatigue and malaise.  It's a great choice for anytime of the day, though most sites list it as a "morning" strain.  I'd be more likely to put something like Santa Marta Colombian Gold or Apollo 13 in the "morning" category as they're more stimmy like typical sativas while this seems better for mid-day usage, but as long as you don't hit it right before bed you should be good.  Take it on a roadtrip or day at the beach or lake because it's perfect for outdoor fair weather outings.