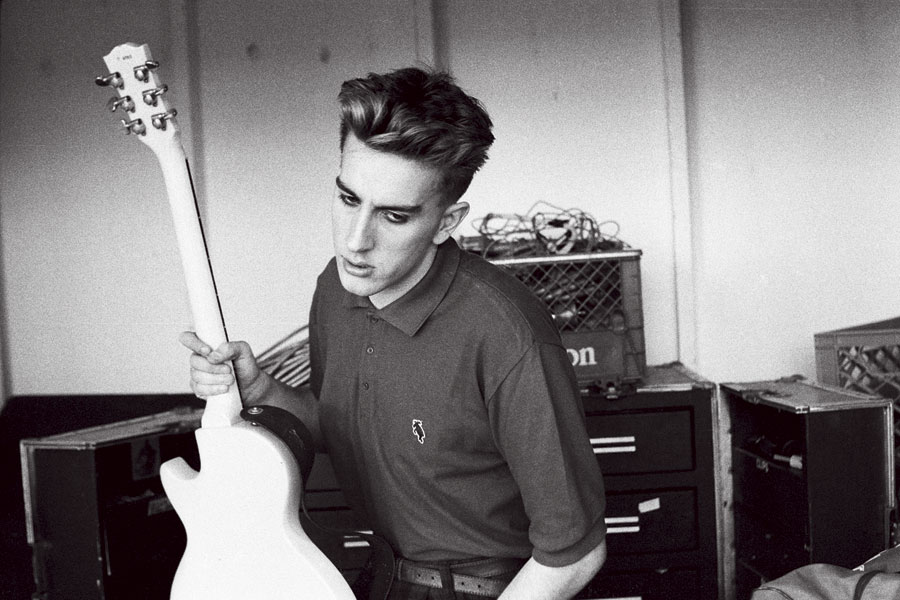 Okay, maybe "never" smiled is a bit of an exaggeration, but from his early days as the frenetic frontman for ska group The Specials, Terry Hall was pegged by reporters as a guy with a mask-like face who looked utterly bored with everything he was singing.  Which looked quite out of place in the midst of his uptempo, energized sets with bandmates Jerry Dammers, Roddy Radiation, Neville Staple, Lynval Golding, John Bradbury, Horace Panter & occasionally instrumentalists like Rico Rodriguez.  That's a big band, and they made full use of the stage--dancing, "skanking" & often dodging projectiles thrown by racists like the one who stabbed Black Specials member Lynval Golding in the ribs.

But for the most part, the band was all about good fun & bringing together the various subcultures in England at the time:  punks, skinheads (the good ones), rastas & working class kids.  And when they weren't fighting racism, they were single-handedly popularizing the "rude boy" style with their pork pie hats, Mohair suits & short haircuts--every middle & high-school kid in the UK wanted to look like them.  The 2-Tone label's artists also partook of many a substance in their day:  One documentary describes a tour bus segregated by prank-pulling amphetamine users in the front & weed heads in the back, so as you walked farther back it just got mellower & mellower.  Can you imagine all the fun?


And even at the height of it all, the lead singer didn't appear to be enjoying himself.

But it didn't me take long to realize why Terry wasn't smiling.  In 1981 after the group's biggest hit "Ghost Town," he & two other bandmates abruptly left The Specials to form Fun Boy Three--a New Wave sort of act that was far less political.  Their songs were mostly lighthearted but there was one, called "Well Fancy That," in which Hall describes in great detail something no child should have to go through.  I actually teared up the first time I heard it.

This was 1983 before #MeToo when it was much less socially acceptable for grown men to talk about such things, so he deserves a great deal of credit here.  Apparently he'd never even told his own mother what happened when he released the song.  In it he mentions the "nervous breakdown" he suffered shortly after the abuse, which, upon further investigation, I found included heavy Valium abuse & dropping out of school at age 14.  Here's a snippet of the lyrics from the song:


"I was 12 & naive...
As I changed, I could feel your eyes watching me,
I crept into bed, you pretended to read,
The lights went out, I fell asleep,
Woke up with a shock, and your hands on me,
I couldn't shout, I couldn't scream,
Let me out, let me dream,
I turned onto my side,
I laid there and cried"

Terry recently came out in a 2019 interview & discussed the incident in more detail.  Apparently he was kidnapped by a pedophile ring in France, sexually abused by several men for days and then punched in the face before being left alone by the side of the road!  What a horrific experience for a 12-year-old child.  It's amazing he was able to overcome that and make something of his life & talents rather than becoming a wandering alcoholic on the streets.  The man deserves a Nobel Peace Prize for his consistent message of peace & tolerance after surviving such brutal treatment.  Wow.

As with The Specials, Terry abruptly left Fun Boy Three in 1983 after completing two commercially successful albums with them.  He then formed a group called The Colourfield that stayed together for, you guessed it, two full-length albums.  It went on like this for the rest of the '80s & '90s.  His reasoning for abandoning successful bands is that all of his favorite bands only made 2 truly great albums together & there's only so far you can go creatively with the same people.  But it struck me as odd.  Most career performers, particularly those with bands as popular as The Specials, stick around & milk them for everything they're worth--if not for the financial success then at least to keep the fans happy.  But not Mr. Hall.  He had a habit of bailing at the peak of each band's success.  This created more than a few rifts with former bandmates like Neville Staple of The Specials & Fun Boy Three, who held a grudge against Terry for 15 years.

Recently I found a great short interview with him that explained a lot.  Terry had gone through most of his life with undiagnosed bipolar disorder, self-medicating with alcohol.  Whether that could account for his impulsive band-hopping I don't know, but it certainly explained his deadpan expression.  He's joked about being "unable to smile" but has also expressed sincere annoyance with people telling him to 'smile' when he's got a real illness that affects his moods.  (Thank you for saying this!  Women are told to smile all the time & it's incredibly offensive/presumptuous). He also mentions his suicide attempt in 2004.


All that said, The Specials have an album of new material that came out this February and is definitely worth a listen.  Their music is as fiery & passionate as ever & the album includes a wide range of sounds from disco to reggae to oompah.  While the lineup is noticeably diminished, they sound as fresh today as they did in 1979.  I hear they put on an amazing live show as well.  They've quickly become an obsession of mine that I admire for their bold political views & groundbreaking vulnerability. The topics they cover range from ditching racist friends to not mindlessly reproducing to date rape & the pointlessness of working for the 'rat race'.  All 100% relevant today.  Maybe more than when they were released.

(P.S. - For any young'ins reading:  this is what people are referring to when they talk about how great pop music USED to be.  It had both style & substance.  The Specials wrote their own music, played instruments, danced & sang music with a purpose.  Terry Hall has made a huge contribution to popular music not in spite of but in part BECAUSE of his mental health struggles & emotional vulnerability.  Here's hoping he stays healthy & happy (but doesn't put on a fake smile for anyone). 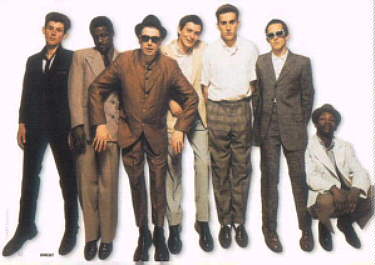