Tupac Died Over a Chain :(

We can talk conspiracy theories all day.  I've dug deep into all of them, particularly the "2Pac escaped to Cuba to live with his aunt Assata" theory.  At one time I fully believed he would come back in 2003: seven years after his death in '96.  All signs seemed to point to it.  The 7's in his last album, the hidden 7's in Gridlock'd...the many things that added up to seven surrounding his day/time of death.
And then 2003 came & went and the only thing we got was Tupac: Resurrection.  The movie.  It all felt like a cruel joke by a clever advertising team who cooked up the conspiracy stuff to sell records.  Looking back, I now see that all the "7" stuff was a coincidence, much like the 9/11 coincidences that were noticed after the fact.  Seriously, click on those links & compare the two.

Tupac's murder remains unsolved...officially.  In reality Compton PD had "solved" it within weeks while Vegas cops just seemed uninterested.  When you get right down to it, the most likely scenario is that Pac was murdered by the same guy he was seen stomping in the lobby of the MGM hours earlier: Orlando Anderson.  If not THAT guy, then one of his friends.  This type of gang retaliation was utterly common at that time--a period when politicians warned of "superpredators" & a crime wave unlike anything we'd seen before.  (Turns out violent crime peaked in the mid-90s & has declined ever since, but 2Pac's death happened in one of the most violent years in American history).

The reason 2Pac was attacking Orlando Anderson--Southside Crip?  A chain.  A Death Row necklace that had been stolen from one of Suge Knight's gang buddies in a mall parking lot several months prior.  Orlando had it, or one that looked like it, and 2Pac lead the charge kicking his ass after the Mike Tyson fight while amped up on testosterone & adrenaline.  There's no doubt that Suge & his thugs got 2Pac pumped up & urged him to behave like a part of their gang (The MOB Piru Bloods), but ultimately he was his own man & made the choice to attack a known gangster in a public place.


2Pac himself was no gangster.  He was a rapper, actor, poet & Shakespeare enthusiast who studied ballet in his artsy high school.  His first role in a major motion picture, Juice, was that of a thuggish villain.  He was a natural...too good at playing the bad guy.  After that role he never seemed to return to reality.  His mom attributes his political rage to being battered by police for jaywalking, an incident during which he sustained head injuries.  Her own words were that it "changed him forever".  Well, yeah.  We now know that concussions & even sub-concussive head injuries can cause personality changes that often get worse with age.  While the incident likely triggered a distrust of authority, it probably also contributed to 2Pac's erratic moods, impulsive behaviors & poor decision making...the same type that got him killed.  Afeni likely didn't realize just how accurate her statement was at the time.

Tupac was a product of his time and also a spokesperson for it.  Generation X is known as the "slacker generation" full of cynical burnouts & dropouts who attempted to change the world through subversion.  The punk rockers, gangster rappers, computer hackers, latchkey kids & DIY Indie underground.  These were the children of divorce, crack cocaine & MTV.  Born out of the "free love" movement of the 1960s & straight into a world stricken by AIDS, Gen X seemed to have just missed the psychedelic, revolutionary orgy of the 20th Century & walked in on a Cold War world of greed & violence.  2Pac was right at home among his creative peers Kurt Cobain, Eazy-E, Madonna (whom he dated briefly), Courtney Love, Prince & Carrie Fisher...all members of Gen X royalty.  Many of whom also died tragically young.

Shakur was the child of a crack-addicted Black Panther mother who himself smoked weed constantly & drank frequently.  He was likely bipolar: in one music video there's a screen shot of a prescription bottle with his name on it & the word "Compazine" on the label.  That's an older antipsychotic drug that was used to treat mood swings in bipolar patients.  His sister is also diagnosed bipolar.  His dual personalities were apparent in his music & private life, but he chalked it up to being a Gemini--the "twins" in the Zodiac chart.  On the one hand, he could be warm & empathetic, writing songs like "Keep Ya Head Up" & "Changes" that championed single mothers & made touching social commentary.  On the other, he could spit at TV cameras, cuss a blue streak & write raps about prison rape & murdering his enemies.  Brave journalists & politicians dared to call him a hypocrite, which probably pissed him off more than anything.  He took everything 100% personally, beefing with everyone from C. Delores Tucker & Bob Dole to The Fugees, Wendy Williams & De La Soul.

If only 2Pac could've stayed focused on his original goal of furthering the Panthers' mission of Black empowerment & self-determination things would've been different.  He had success uniting gangs & drafting ground rules for doing business in the neighborhood in a responsible way.  No matter how 'gangster' or 'thuggish' he appeared on the outside, these were merely facades that allowed him to appeal to certain segments of Black society so he could implement his political & social ideals.  It's this pushing of unity & peace that put him in the sights of the FBI along with others throughout history who have tried to do the same (Fred Hampton, Malcolm X, MLK).  The last thing the government wants is "the rise of a Black messiah".  <--- Their words.  If this sounds like paranoid drivel, please familiarize yourself with COINTELPRO & Hoover's war on the American Left.  Much of Tupac's extended family is rotting in prison to this day or living in exile due to their political affiliation with Black power or Socialist groups.  He frequently name-dropped them in his songs.

But back to Tupac.  He got caught up in the sideshow...the thug life facade.  And it cost him his life.  Stomping out other Black men was not part of the game plan.  Getting wrapped up in a Coastal war with a fellow rapper & Black record label owner did nothing to further the goals of liberation, justice or Black empowerment.  Rather than beefing with each other, Pac & Big should've let their pimpish CEOs duke it out like grown men.  It was THEIR beef anyway.  The world would be a much better place if Puffy & Suge had been hit in those cars & Biggie & 2Pac would've survived to talk about it.  Of that I'm sure.

But even if 2Pac hadn't died on September 13th, 1996, would he still be alive today?  Not at the rate he was going.  Being shot & going to prison really did a number on his sanity.  The paranoia grew to borderline schizophrenic levels behind bars, which is understandable considering it was a maximum security prison & he witnessed someone get killed inside (among other horrific things).  We'll probably never know the full extent of how much he was harassed & tortured by the guards or even if government agents planted the "Biggie set you up" stuff to start an East Coast/West Coast war.  They did just that in the '60s & '70s with the Black Panthers & other Black nationalist groups like the Black Guerilla Army or other factions of the Panther Party.  There are certainly similarities between the rumors, insinuations & insults that created both the '60s & '90s wars.  Whatever the case, 2Pac came out of prison raging mad & convinced that Biggie & Puff knew he was going to be shot & failed to warn him.  He was on a warpath from then until his death, with the political and activist stuff taking a back seat to revenge & gangster-ism.

It's clear from a psychological standpoint that Tupac was passively suicidal in his final years.  He certainly planned for his death by recording more posthumously released music than his entire discography consisted of while alive.  Maybe because he was going to bring the end upon himself with his reckless living one way or another.  He mentions suicide repeatedly in his songs, begging God to "send me to Hell 'cause I ain't begging for my life" in Troublesome '96.  And Only Fear of Death is basically one long diatribe on suicidal depression & paranoia.  Yet these desperate cries went unheeded in part because he was a Black man struggling with mental illness in America--one of the most under-served demographics in the mental health field.  Ultimately he couldn't bring himself to end it but triggered the shot that would take his life.  There's nothing heroic or 'gangster' about that. 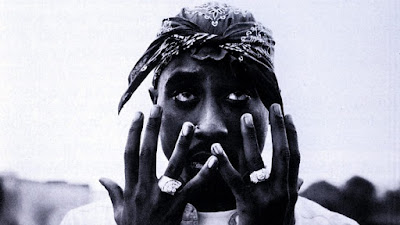 Tupac:  A product of his generation?


He cheated an entire generation out of a thought leader & creative powerhouse, as did the trashy people he was surrounded by.  Music quality in general went down the tubes around this time due to the Telecommunications Act of 1996 & the rest is history.  He never got to start his political party, run for office or get his own record label "Euphanasia" off the ground.  And that's a shame.  You can blame Suge Knight, Ayanna Jackson, Bad Boy Records, the FBI or whoever you like, but at the end of the day they didn't force Tupac to attack a gang member.  That was all him.

If it makes you feel better to believe he's on an island in the middle of the ocean somewhere, so be it.  But like with Eazy-E's death from AIDS & the surrounding conspiracy nonsense, you'll be missing an important lesson.  Tupac's killer was murdered in a parking lot in 1998 over an unrelated matter, thus completing the circle of karma & pointless death.

If you enjoyed this article, consider donating to one of the accounts below.  It's anonymous: