"Where There's Smoke..." The Wrongful Execution of Todd Willingham


If you're familiar with True Crime or related genres, you've probably heard of Cameron Todd Willingham--the man wrongfully executed in Texas for a crime he didn't commit.  That crime was the burning of a house with his three children inside.  Several films have been made about the case, but I'd like to delve a bit deeper into who Todd was & the dynamics of the small Texas town he was convicted in.

Cameron Todd Willingham was born in Ardmore, Oklahoma in 1968.  He grew up poor & troubled in his rural community, picking up a paint-huffing habit at the painfully young age of 11.  His hobbies included shoplifting & sending younger kids to commit robberies, for which he would reward them with drugs.  Todd smoked lots of pot as a teen & loved heavy metal bands like Iron Maiden & Led Zeppelin.  He was once arrested for attempting to steal a car as a juvenile & spent his 18th birthday in jail.  He eventually moved to Corsicana, Texas, where he lived with his girlfriend Stacy.  They wound up having 3 children in quick succession--a 2-year old & twin girls.


Todd was an attentive stay-at-home father while Stacy worked to support the family.  Like many young working-class parents, they were stressed out with 3 kids to care for which lead to many arguments.  Things only got worse over time.  Todd began verbally abusing & beating Stacy almost daily.  He was known around town as a womanizer & drinker who was generally disliked.  He cheated on Stacy with an older neighbor who had kids his own age.  Despite this, Todd loved his kids & never showed any violence toward them.  He proposed to Stacy only 3 months before the fateful fire.


Stacy initially stood by Todd after the fire despite divorcing him & moving on with another man.  She never visited him on death row yet insisted he was innocent.  Stacy was a nervous woman with low self-esteem; a victim of domestic violence.  Her mother had been killed by an abusive man when she was younger so she undoubtedly had skewed ideas of what a healthy relationship should look like.  Despite her own poor treatment by Todd, she remained adamant that he would never hurt his kids...at least in the beginning.

Detectives & jury members used Todd & Stacy's abusive relationship to form a theory on what happened with the fire, from which they worked backward to deduce his guilt.  They also used Todd's behavior after the fact to imply guilt when it's been shown repeatedly that people grieve differently & such behavior cannot be used to determine innocence or guilt.  (Darlie Routier of Rowlett, TX, was similarly convicted for the infamous "Silly String tape" in which she's smiling & chewing gum at her kids' graves shortly after their murders).  Todd was seen drinking & playing darts at the local bar shortly after the fire, which townspeople took to mean he was guilty.  Perhaps he was in shock, drinking his pain away or simply putting on a brave face in public only to go home & cry himself to sleep.  One can never truly know what goes on in another person's head.  Grief is not always logical & doesn't look like it does in movies.

"A fire does not lie."  That line was repeated by the prosecution throughout the case as if it were the gospel.  Unfortunately it was later debunked when it was proven that fire investigation is not an exact science.  In fact it's not a 'science' at all but more akin to a pseudoscience like astrology.  In addition, detectives claimed that Willingham used accelerants like charcoal lighter fluid to draw a pentagram on the floor before lighting it on fire, which was an outright lie.  They also cited the posters on his wall when making the determination that he was a 'sociopath'.  The posters contained heavy metal logos mistaken for Satanic imagery.  This hearkens back to the Satanic Panic of the late 20th Century that resulted in many innocent people losing their freedom, from daycare workers to "goth" kids like the West Memphis Three.  The psych professional that "diagnosed" him a sociopath had never evaluated nor even met Willingham.  Perhaps he was a psychic instead of a psychologist?  🤔

One of the main nails in the coffin against Willingham was the prosecutor's witness: an informant named Johnny Webb.  Webb claimed Willingham had confessed to killing his kids while spending the night in a cell with him.  As informants are wont to do, he testified for his own benefit at the District Attorney's urging.  Webb later wrote a letter recanting his confession & stating it was false...and then wrote a second letter recanting the recantation.  Now he claims not to remember the entire incident.  Not exactly the most reliable witness, eh?  (The Innocence Project has since corroborated Webb's account that the DA offered him a special deal if he testified against Willingham).  So his entire sworn testimony was indeed a lie.


Texas is a leading death penalty state.  They tout their high number of executions as a point of pride in elections & political debates.  They've killed a total of 561 inmates since 1976--more than 1/3rd of the entire national total.  They were the first state to test out lethal injection in the '80s & have carried out a number of controversial executions on inmates suspected to be innocent, such as Johnny Frank Garrett of Amarillo.  (Here's a gripping documentary on his story).  Governor Rick Perry (R) was in office when Todd Willingham was executed & had a chance to review the revised evidence in his case & grant a 30-day stay of execution.  Somehow, he saw fit to deny him the measly 30 days & proceed with the killing despite all the new information that had come to light about arson science.

The fact that Willingham was a poor, ignorant nobody from the sticks with no family to help him pay for legal fees & other costs didn't help matters.  All too often, your chances of winning a case depend on your ability to afford bail, adequate representation & court costs.  Sometimes skin tone & who you know also factor in.  Willingham was white but didn't happen to know anyone in high places so he was essentially fucked.  When pushed on the issue, Governor Perry argued that Willingham's last words were an "obscenity-laced diatribe" and that proved he was a "bad man".  Might you be a little miffed if you were being killed for something you didn't do, Mr. Perry?

While Todd Willingham was undoubtedly a low-life in many ways--a petty criminal who beat his wife, cheated on her, exposed his kids to an abusive environment & lacked ambition, that doesn't take away his right to a fair trial.  He absolutely belonged behind bars for battering Stacy, particularly while she was pregnant.  But that's a very different sentence than Murder One with the death penalty.  Perhaps karma was making its way back around to him when Stacy went to the press a few days before his execution claiming he'd confessed to killing their kids.  Maybe it was petty revenge or something else entirely.  Either way, she got a front-row seat to his execution on February 17, 2004 & now firmly maintains that he IS guilty as charged.  Among his last words: "I hope you rot in hell, bitch; I hope you fucking rot in hell, bitch. You bitch; I hope you fucking rot, cunt."  See below.


I can forgive the jurors & townspeople for drawing improper conclusions about the case.  Most of them were no more educated about forensics than Willingham or his ilk.  But detectives, judges, police, prosecutors, politicians & District Attorneys should be held to a higher standard than laypeople as they wield much more power.  With power comes responsibility--a responsibility to be educated in the field in which you work.  To have basic empathy for the people you serve.  To make thoughtful, evidence-based decisions with the input of others in a cooperative manner.  Voters have a responsibility to make informed decisions about who they put in power too, as their votes directly affect cases like these.  People tend to side with the state & assume all inmates are guilty until this happens to them or someone they love.  Only then do they see how fragile the justice system truly can be.  But by then it's too late. 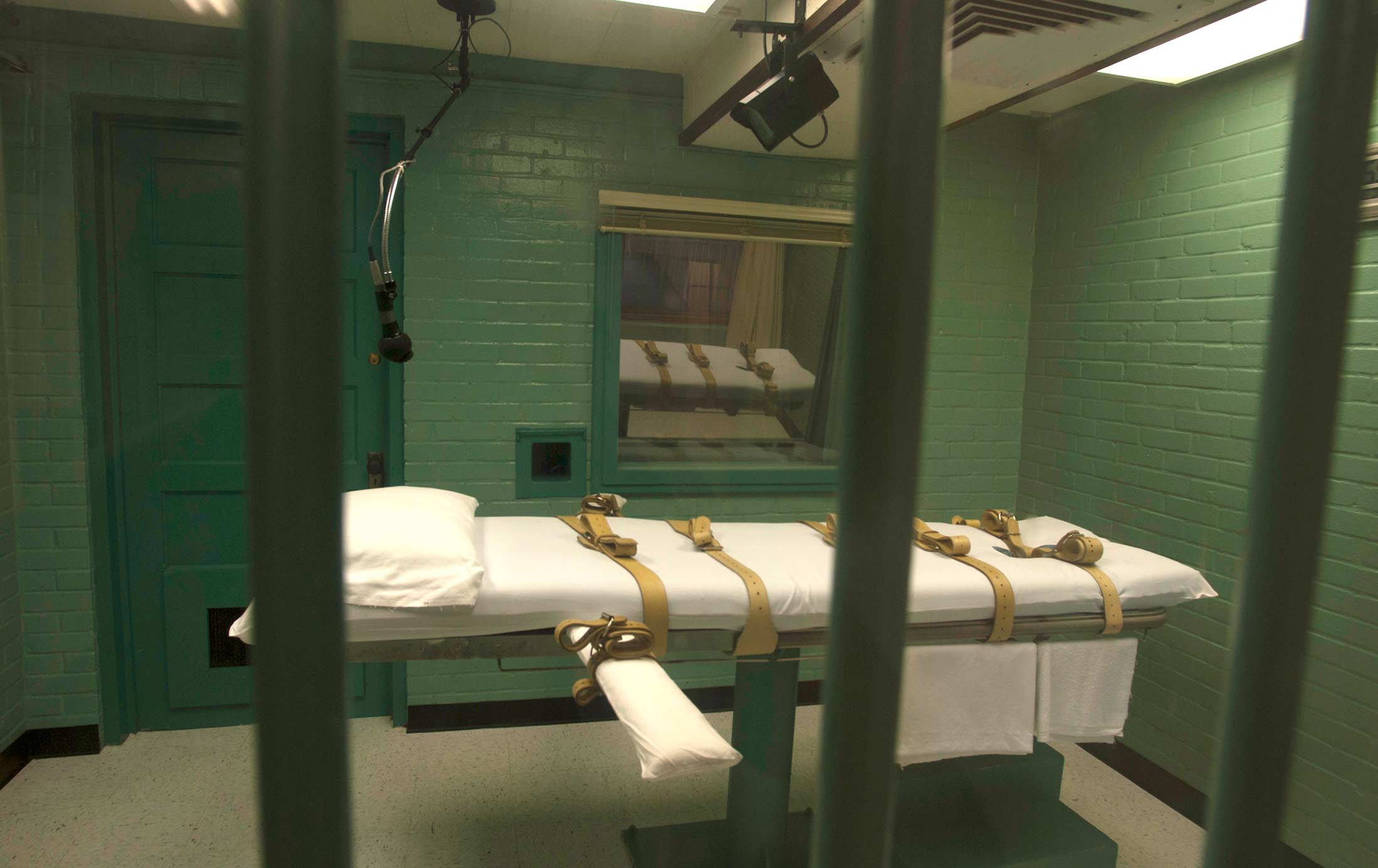 As for me, I support the death penalty only in extreme cases of violence where there's no question about guilt.  But the following changes need to be made immediately if we are to have a humane justice system:

1.)  If there's ANY doubt about an inmate's guilt, the execution should not go forward.  You can always kill a person later but you can't un-kill them.

2.)  If the proper drugs cannot be obtained to ensure a quick, painless death, the execution should not proceed.  We know how to bring about death in a timely & humane manner; we do it for animals & assisted suicide patients all the time.  Lack of access to the drugs that make this possible is the state's problem--not the inmate's.  Torture & human experimentation are not acceptable in a developed nation.  We are not Nazis.  The death penalty must be carried out in a sterile, dispassionate manner or not at all.

3.)  An inmate's wealth or lack of it must play no role in their sentencing, nor can their race or the race of their victims.  A disproportionate number of poor people & minorities sit on death row, and Blacks who kill whites are far more likely to receive the death penalty than whites who kill Blacks.  Everyone must receive the best possible defense & access to materials that will help them in their appeals.  No special leniency for law enforcement, government officials or others in positions of power.  Equal sentences for equal crimes.

4.)  Abolish solitary confinement & end prison rape & abuse now.  Loss of freedom and--in the case of capital punishment--loss of life are the punishment.  It's not the warden or C.O.'s place to impose additional suffering on inmates.  They get paid to keep inmates safe.  Failure to do so should result in job loss & criminal charges if they are directly involved in encouraging or engaging in abusive behavior.  Again, torture is not acceptable under any circumstance.

5.)  If the state rushes to execute someone while there's still doubt about the evidence, whoever makes that decision should face criminal charges if the person is later found not guilty.  The stakes are too high for there to be no consequences when an innocent person is killed.  If the state kills even one innocent person, it's just as bad as any common murderer.

If you support the death penalty, you must also denounce the sloppy, vengeful application of it or you risk losing it altogether.  The world is watching.  Putting a psychopathic killer to death should involve no more emotion than putting down an aggressive dog that's attacked someone; the goal is to eliminate the threat & protect society.  Not to torture the animal & make a show of it.  No matter how angry their crimes make you feel, your feelings have no place in the justice system.  Save it for your therapist or diary.

It's natural to want "bad people" to suffer the same fate they imposed on others--what's not okay is to actually impose torture on said people.  There are innocent people caught up in the system all the way to the execution chambers like Todd Willingham, which is one of many reasons we must treat all inmates with basic dignity.  Even if someone is guilty, it's not our place to impose beatings, verbal abuse, rape, malnutrition & total isolation on them.  Let their own minds do the torturing.  Prison is already designed to punish.  And there's no bigger price than paying with your life via capital punishment.

How do you feel about the Willingham case & the death penalty in general?  Sound off in the comments! 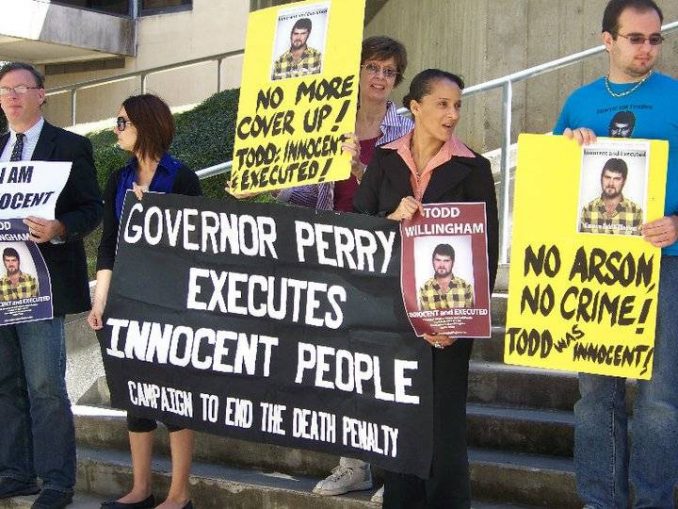