"Junkie Pneumonia": The Untold Story of Addicts & AIDS in America

HIV/AIDS is often thought of as a disease that first made its presence known in gay men around 1981, but the truth is much more complex.  And disturbing.  According to several first-hand accounts, AIDS was killing IV drug users in New York City's poor & homeless population as early as 1975--a full 6 years before the epidemic was first officially reported in the Morbidity & Mortality Weekly Report in June of 1981 in a group of homosexual men.


This is important for 2 major reasons.  First, the total marginalization of addicts allowed the disease to make major inroads for several years that it otherwise wouldn't have made.  Secondly, the mislabeling of AIDS as a gay-specific disease caused much confusion & stigma that persists even to this day.  Before it was named AIDS it was called "gay cancer" or "GRIDS" (Gay-Related Immune Deficiency Syndrome) because gay men were the first demographic doctors noticed it in.  But perhaps they only noticed it in them because they were middle-to-upper class white males with access to health care, unlike the poor brown & Black junkies on the streets who'd been dying of various opportunistic infections for several years already.

Regardless, the stigma has stuck with the LGBT community.  Gay men still can't donate blood & were told by preachers like Jerry Falwell that AIDS was the wrath of God & an expected consequence for 'going against nature'.  Ronald Reagan's war on domestic spending & conservative attitudes toward sex prevented researchers from receiving desperately needed funding as well as getting safer sex information out to the public.  The epidemic officially started in 1981, but because it was associated with gays & sex he didn't utter the word "AIDS" in public until 1987.  And here's what his cabinet members had to say about it behind closed doors:

Think THAT type of attitude didn't impede AIDS research & prevention?  (Not that there would've necessarily been less stigma if it had been recognized as an addict's disease, but it could've been caught earlier perhaps).  Here is an intriguing article from 1992 in the Ann Arbor Agenda detailing the silent rise of "Junkie Pneumonia," also known on the street as "the dwindles" (referring to the wasting syndrome that accompanies AIDS) long before it was even called GRID or the gay plague: 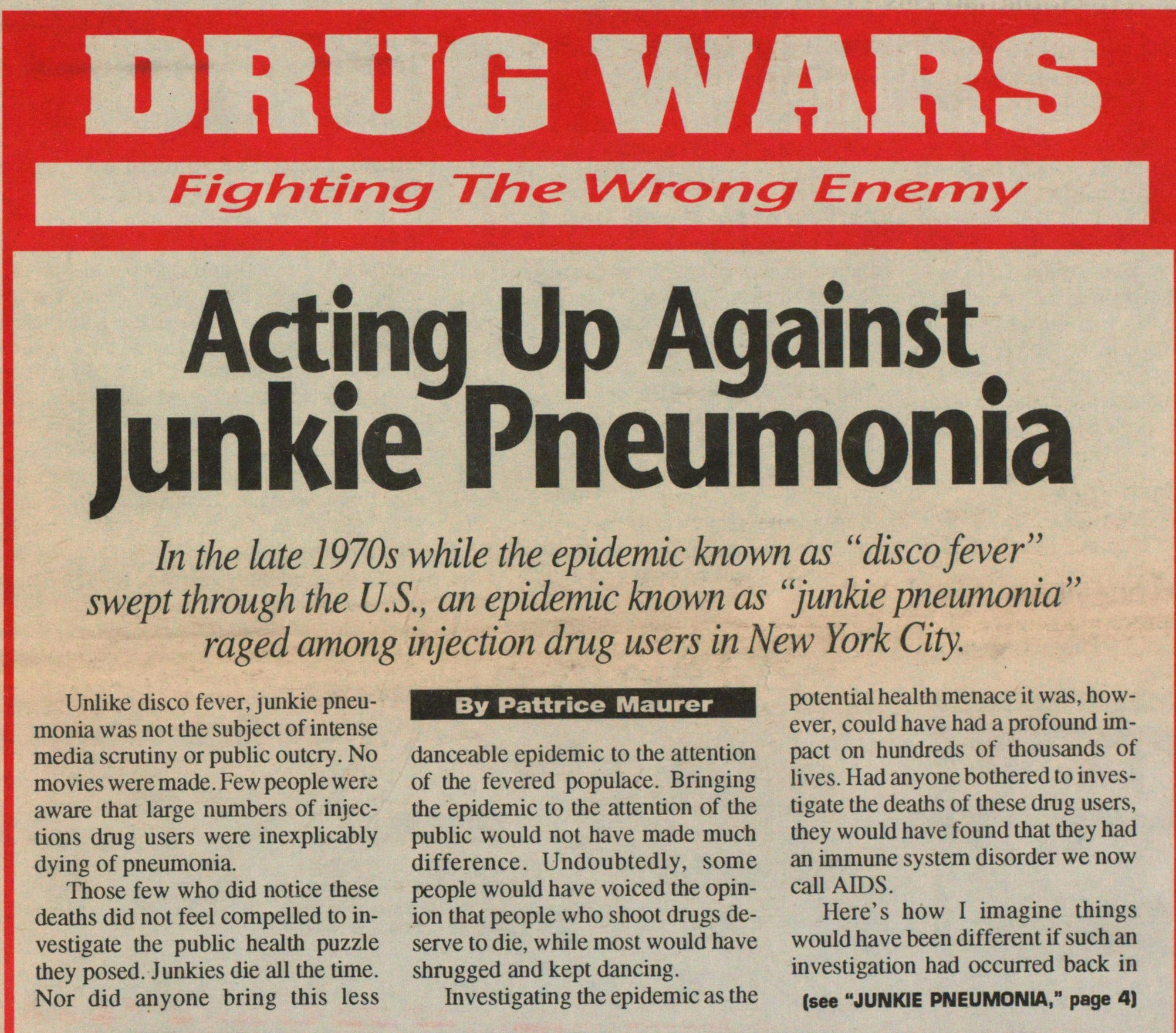 While we now know the origin of HIV/AIDS lies in the heart of Africa, from where it made its way to Haiti around the 1960's & then into the U.S. in the early 1970's, the history of AIDS on American soil has always been a bit murky.  People started to become deathly ill in noticeable numbers in 1981 from this virus that has a 5-15 year average incubation period, meaning it had to have been with us longer.  Studies show it was in New York City as early as 1970.  There were sporadic cases around the world, like that of Robert Rayford of St. Louis, in 1969.

But overall AIDS was generally believed to have hit gay men first & hardest, soon affecting IV drug users & hemophiliacs before reaching the general population.  But now this appears to be incorrect.  It was even wrongly blamed on "Patient Zero" Gaetan Dugas, a gay Canadian flight attendant who frequented the bathhouses & was said to have brought the disease to the U.S. coastal cities due to his traveling & cavorting.  But it was present long before he arrived we now know.

IV drug users could've been the first to die from the ravages of AIDS in New York City.  This matters because needle exchange & other harm reduction programs are still illegal in a number of cities & states, not to mention that drug paraphernalia charges can encourage needle sharing by scaring addicts into ditching their clean syringes in lieu of communal/shared ones at shooting galleries.  And HIV isn't the only communicable disease that can be spread with dirty needles.  There's also Hepatitis B & C, both of which can cause chronic liver damage resulting in liver cancer.  Not to mention a variety of bacterial infections that can lead to sepsis.  There was even a malaria outbreak in the 1930's & '40s in New York among IV drug users thanks to needle sharing.

Bottom line:  The marginalization of (often poor, homeless) addicts is a threat to public health.  Even if it weren't, only a psychopath would wish a painful lonely death on people in such a precarious situation.  Universal healthcare is badly needed to prevent another epidemic, as are rational drug laws that prevent the spread of transmissible diseases like HIV & practices like needle sharing.  The AIDS epidemic is but one example of our failed policies in these areas.  The belief that diseases like HIV only affect certain populations who have done something to "deserve" them is not only cruel but wrong...dead wrong.  Our inaction & apathy put us all at risk.  We can't afford to keep treating addicts & the poor like pariahs.  Another plague will be along shortly to nudge us into action if we fail to act now.
at October 30, 2019