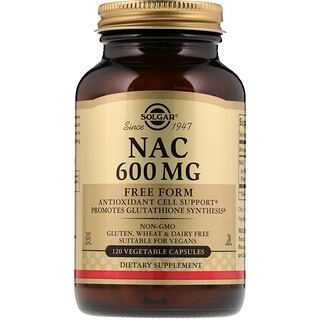 I've been ingesting a lot of codeine with acetaminophen lately & thought I'd do something good for my liver, so I ordered some N-acetylcysteine (NAC) from eBay vendor vdcusa.  NAC is the compound administered in the hospital to save people from fatal acetaminophen overdoses & it's been shown to help protect the liver in cases of lower dose/chronic APAP overuse too.  But I've also seen reviews claiming the smell/taste are so bad they can cause vomiting, which will be a deal-breaker.

Of course I'm doing cold water extraction on the codeine pills when I can, but it's time consuming, messy & indiscreet which means I'm also popping quite a few 500mg APAP pills per day in addition.  Thus the need for additional protective measures.  I discovered after some extensive Google-Fu that 200mg NAC essentially neutralizes the toxic effects of 500mg APAP, which means these 600mg capsules can possibly undo the damage of three of my codeine + APAP tablets (1,500mg).  Disclaimer:  I'm not taking that as hard science or recommending anyone be reckless with their acetaminophen intake...just something to keep in mind.  Liver damage is not something to fuck around with.


So the NAC itself smells just as awful as expected: like stink bombs made from 3-day old deviled eggs left out in the sun.  The effects for me are thus:  extreme fatigue & mild nausea for the first 45 minutes followed by increased energy & alertness after the tiredness recedes.  I had planned to take this before bed but found it too stimulating--not in the traditional way amphetamines are but it does worsen my insomnia & already-light sleeping.  So now I take it mid-day before my short naps & it works great.  It's been promoted as a supportive therapy for autism, OCD & ADD; all of which I struggle with.  What a cool bonus!  I was just wanting it for the liver protecting effects.

Solgar brand is solid quality & comes in dark glass bottles to preserve the potency/freshness of their supplements.  I previously had their Vitamin D3 & found it more than satisfactory.  Overall, I give this order a 4.8 out of 5 stars for quality & freshness.  Many of the things sold on eBay are expired, so I requested a new bottle & got one marked 10/2020.  Sweet!  Can't really complain about much other than the smell of my farts, which have the aforementioned sulfur egg smell.


Update (12/1/19):  After a month or so of continuous nightly use, I've noticed some side effects with this stuff that I'm pretty sure can be attributed to it.  If I take 2 capsules (1,200mg) instead of one, I wake up with chest tightness & a sort of asthmatic wheezing sensation similar to the onset of bronchitis or the flu.  This stands out because I don't have asthma.  I also got extremely winded while attempting to turn my mattress one day after taking a double-dose of NAC.  From a little Googling I've gleaned that NAC can have airway side effects like wheezing & shortness of breath, which seems counterintuitive since it's touted as a treatment for COPD & cystic fibrosis.  There was a troubling article stating that it can promote lung cancer in rats--another eye-opener.

Regardless, I'll continue taking NAC nightly as long as I take the codeine with acetaminophen.  My liver enzyme test came back normal, which it almost certainly wouldn't have if not for the NAC.  It helps that I don't drink alcohol I'm sure, but I am taking a lot of Tylenol every day if I'm being honest.  This won't go on forever because I'll eventually run out of the pills.  Will update with any additional side effects or troubling lab results that pop up.

Update (4/27/2020):  After some research, it appears NAC might have some positive benefit for COVID & similar respiratory diseases.*  Its expectorant effects combined with its inhibition of pro-inflammatory molecules in the lungs could potentially prove useful in mild cases of COVID.

When I was sick with suspected COVID, I was taking NAC daily at doses of around 1,200-1,800 mg in divided doses.  My symptoms remained in the "mild" category, with the worst of them including shortness of breath & dry coughing spells.  I take NAC to help offset liver damage from acetaminophen in the codeine pills I ingest (which I also took while sick)...who knows how all this affected the course of my illness.  I also take a whoooole lot of other meds & supplements daily so I'm a bit of a guinea pig in this regard.  If you get COVID symptoms, it's best to limit the amount of stuff you're taking as much as possible, but if you DO feel relatively healthy/strong & want to experiment on yourself, NAC would probably be a safe bet at low doses around 600 mg.

*N-acetylcysteine should not be used without a doctor's supervision due to individual differences in immune response & the vast variance in severity of COVID from one patient to the next.  We still don't fully understand how the virus kills, though we know it does more than just damage the lungs.  COVID can cause blood clots as well as brain, kidney & heart problems, so it's important to not throw too many additional variables into the mix until more is known.
at October 03, 2019