Life & Death on the Salton Sea 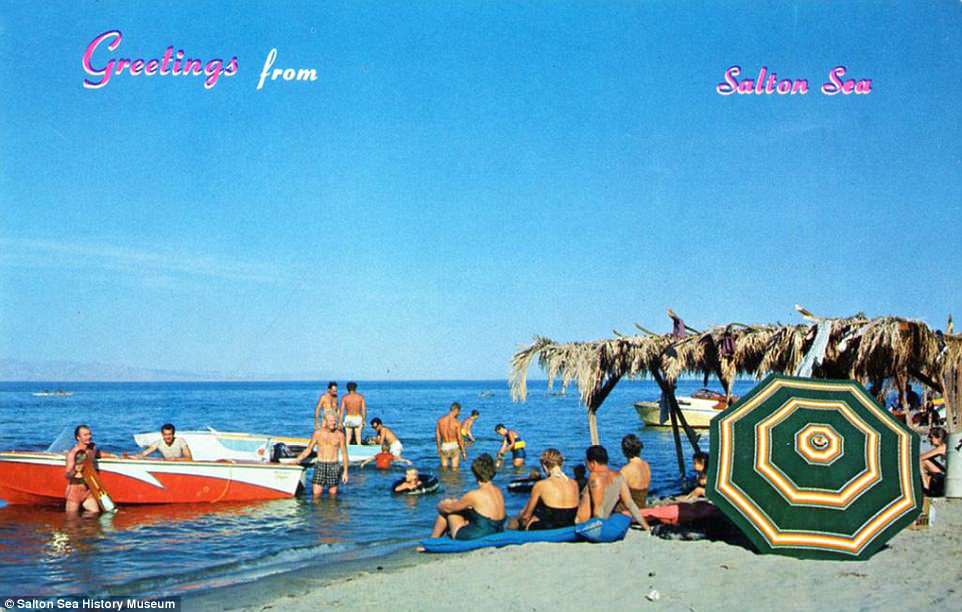 Once a posh resort town rivaling the popularity of Palm Springs, the Salton Sea in California is now a dying wasteland that's been allowed to cause mass destruction to the animals and residents who live there.  Due to unique ecological circumstances, the sea gets more toxic as time goes on and threatens residents as far away as San Diego & Los Angeles.  To understand why, we must look at how the Salton Sea was created & how it ended up in its current state.  (Note:  When I refer to the "Salton Sea," I'm including all surrounding areas including Salton City, Bombay Beach, Slab City & any other small communities living near/on the water).

The Salton Sea is a man-made lake and California's largest body of water.  It was formed accidentally when, in 1905, a flood breached a canal & allowed the Colorado River to rush into a dry lake bed known as the Salton Sink.  In the 2 years it took to fix the breach, a lake nearly twice as big as Lake Tahoe had arisen.  By the mid-1950s it was being marketed as a "Miracle in the Desert" upon which palm trees were planted & golf courses, yacht clubs & bars were established.  There were even flamingos brought in to complete the aesthetic.  Stars from the Beach Boys to Desi Arnaz & Frank Sinatra frequented the Salton Sea.  All this in one of the least habitable places in North America--a barren desert in Death Valley that was never meant to house people, let alone be a swinging vacation destination.

The wildlife population is perhaps the most unique feature of the Salton Sea.  Shortly after the lake was created, it was stocked with all kinds of fish including orangemouth corvina, Gulf croaker and tilapia...lots & lots of tilapia.  The fish drew in giant flocks of ducks, seagulls, grebes & bald eagles--450 bird species in all.  For perspective, the Salton Sea is home to 80% of Cali's white pelican population in the winter, largely because the rest of the state is overrun by human dwellings like homes, streets & other buildings.


With all these animals & humans setting up shop in the Salton Sea, things went from great to terrible in a short span of time when it went belly up.  This wasn't your typical bankruptcy > ghost town story; we're talking massive water poisonings & wildlife die-offs resulting in a stench so foul it drove vacationers away en masse.  This happened in the mid-1970s due to agricultural run-off draining into the lake, which has no natural drainage system itself.  For two summers in a row, the beach was inexplicably littered with dead fish bodies as the lake reached a critical mass of pesticide runoff.  Then two freak storms finished off what was left of the place.  By 1980 property values were so low people couldn't get out fast enough.

But it got worse.


Some residents couldn't afford to just sell their (now dirt cheap) property and move away, thus they were forced to remain in this stinking wasteland.  The lake became trapped in a vicious cycle of death & destruction that went like this:  farm runoff fed the lake, causing it to become more salty with each passing day.  This promoted the growth of toxic algae blooms which suffocated the fish & caused them to drown.  Their rotting bodies then fed the algae, restarting the cycle all over again.  In 1999 nearly 8 million tilapia died in one day.  Of course the birds who feasted on the fish were eventually affected too.  A wave of avian botulism killed off thousands of pelicans in the mid-'90s alone.  Predatory birds then swooped in & attacked other disoriented birds stranded on the beach, and... you get the picture.  The beach became a scene of mass death rivaling a warzone or the plague but with birds & fish.

Unfortunately, for humans the worst is yet to come.  As the Salton Sea dries up, it's exposing layers of alkaline dust laced with decades of built-up pesticides & toxic algae (and god knows what else), causing a big stink and serious health problems for surrounding areas.  The stench of raw sewage can be smelt as far away as Los Angeles on a windy day.  And the people living within a stone's throw of the lake are in even greater danger, as you can see in this 2004 documentary narrated by John Waters (skip to 23:59 to hear of all the untimely deaths of Salton residents).  The "sand" is made up of millions of fish corpses as well as silt & mud, which can be like trudging through quicksand.  Temperatures in the summer can reach a scorching 125 degrees, but it feels closer to 150 due to the humidity from the evaporating lake.  Eating fish caught in the Sea is a surefire way to get botulism.

This toxic combo has already proven deadly for some.  On May 29, 2009, a teen named Marie Dugan died of a sudden asthma attack while at her home in Coachella, CA (not far from the Salton Sea).  Her sister Michelle (27) who is also asthmatic was told by doctors she has the "lungs of an 80-year-old" and has to wear a vibrating vest to break up the fluid in her lungs every day, as well as using an inhaler a staggering seven times each day.  She's even been considered for a lung transplant.  COPD, asthma & other respiratory diseases are exceedingly common in the Mexicali area near the Salton Sea.  A 6-year-old boy who lived in the town of Imperial died of asthma in 2013, as did an 8-year-old girl in nearby El Centro in the following year.

While there's no way to prove that toxic dust caused Marie's death or Michelle's lung disease, what we know about inhaling particulate matter like dust is pretty damning.  In addition, a toxin found in algae blooms called BMAA has been linked to diseases like ALS, Parkinson's disease & dementia.  Not great news for the citizens of the Salton Sea or surrounding areas, which are also being strangled by thick, heavy pollution pumped out by factories along the Mexican border.

So why does this tiny ghost town matter?  Because it's a microcosm of so many of America's crumbling towns & cities that have been bled dry by corporate vampires & left to rot once profits dry up.  Parts of central Florida are currently facing a similar problem with agricultural runoff & algae blooms, putting thousands at risk while they wait for politicians & corporations to clean up the mess they made.  If the Salton Sea fiasco is any indication, they'll be waiting a long time.

Every state has at least one "Salton Sea" of their own, if not several:  A once-booming hub that's now completely empty or inhabited only by the poorest of the poor who can't afford to flee to greener pastures.  Towns where the nearest grocery store or hospital is 45 minutes away & there's no public transportation whatsoever.  Where the schools don't offer arts or humanities and the textbooks are the same in the 8th grade as the 5th.  I know because I grew up in one & am surrounded by several others.  Even many big metro areas are becoming too expensive due to gentrification, pushing out long-time residents in favor of multi-millionaire & billionaire tenants (see:  NYC, Seattle & L.A.).  But the crumbling rural towns offer the most stark images of a nation in decline.


These towns are the product of the short-sighted greed of previous generations who are now nearing the end of their lives & won't live to see the fallout from their personal & political actions.  These same folks love to blame 'lazy millennials' and 'drug fiends' for the downfall of their precious stomping grounds, not realizing that joblessness & addiction are a natural outgrowth of stagnating wages + ever-increasing cost of living combined with a lack of recreation, beauty & hope they enjoyed as youths.  Who cares what comes of the wildlife & people of the Salton Sea in 2040?  Certainly not some old rich dude who profited from its heyday in the '50s & '60s & fled before it could melt into the sulfuric stink ditch it's now turned into.  But maybe he should care about what he's leaving behind for his kids, grandkids & their peers?  Because, you know, it's the humane & non-sociopathic thing to do?

At the risk of sounding preachy, we've got to do better about cleaning up our messes.  Between overpopulation, over-consumption, pollution & the direct destruction of land for cities & other developments, humans will have plundered everything worth maintaining in only a few short decades.  Economic booms are fine so long as someone stays behind to invest in cleaning up the aftermath when things go bust.


Better yet, more planning should be put into preventing disasters caused by things like agricultural runoff into bodies of water or oil & chemical spills.  There are endless examples of other nightmare scenarios such as Love Canal, Times Beach, 3 Mile Island & Libby, Montana that resulted from a mix of greed, poor long-term planning & disregard for nature & human life.  Prevention is always cheaper & easier than cleanup but cutting corners is too tempting for those at the top, thus we repeat the same mistakes to the same effect.  And of course corporate lobbying allows the wealthy to have laws written in their favor so regulations on their companies are weak.  Things aren't tilted in favor of the average individual citizen.  And we're the ones who pay with our health & lives.

As of January 1, 2018, the Salton Sea entered its final death spiral.  Because of a water transfer agreement with San Diego, the lake will now receive 40% less water, causing a 20-foot drop along with majorly receded banks.  Any remaining fish will be killed off by 2045, as its waters will be 5x saltier than the Pacific Ocean by then.  Which will in turn disperse the birds.  And so on.  Every action has a reaction, and not all of them are entirely predictable until they start happening.  We're likely looking at another Dust Bowl/Grapes of Wrath situation if something drastic isn't done.