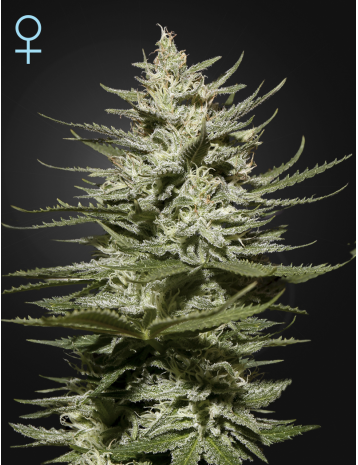 For this week's dispo trip, I decided to splurge & dropped a cool $100 on various edibles (more Simple Cure candies, lol).  I also picked up a gram of a high-CBD strain called The Church CBD, though it was mislabeled as "Church OG" which is actually a high-THC strain with a totally different lineage.  D'oh.

The Church CBD is an Indica-dominant hybrid child of "The Church" (i.e. - Super Skunk + Northern Lights + Swiss Sativa Skunk crossed with an unnamed CBD-rich strain).  Church OG, on the other hand, is the offspring of an OG Kush phenotype or a possible cross between OG & God's Gift.  Two different beasts albeit with similar names, so it's a shame about the mislabeling on the package.  The dispensary's website lists it simply as "Church"--yet another incorrect label for the CBD-rich version which is correctly named The Church CBD.  "Church" is the parent of what I have.

At any rate, this particular cut tested at 7.52% THC & 10.54% CBD.  Right up my alley.  As with the Trident I picked up from the same dispensary, The Church CBD is loud af in the smell department, emitting a pungent odor that wafts out through the container.  I have to wait until everyone's in bed to even break it up.  It cost a mere $12 for a gram.

The buds are medium-thick, medium-dry & break apart easily.  The smell is overwhelmingly citrus with emphasis on the lime end of the spectrum.  There's no hint of pine, berry or other smells with this cut.  Just pure sour zest that unclogs your sinuses when held to your nose.  Acrid, heady & invigorating like walking through a lemon orchard while drinking a fresh-squeezed limeade.  (Sorry, best visual I could come up with).  The terpene content listed on the dispensary's website includes:  pinene, camphene, myrcene, carene, ocimene, terpinolene, caryophyllene & linalool.  No limonene?  Really?!  All I'm smelling is limes on limes.

The effects?  They're described as narcotic, sociable, calming & relaxed which makes sense when you take the CBD content & slight Indica-dominance (60/40) into account.  And that's pretty much right.  I pack my one-hitter with as much as it'll hold & sneak into my closet for a hit late at night after a day of popping codeine.  I feel it first behind the eyes & am quickly transported to a quite stony state of mind with a twinge of paranoia.  Once the initial anxiety wears off, the high is pretty mellow.  It's 11:37 p.m. when the first wave hits & 12:15 when I start to touch back down to sobriety, killer munchies at 1:00 a.m. & back to baseline by 1:42...feeling pretty drowsy.  This strain is lower in both THC & CBD than Trident, making it a 1:1 strain rather than a 2:1.  Still, I'm DEFINITELY impaired from one hit despite the relatively low THC content.

Overall I'mma give The Church CBD a 4.6 of 5 stars for effects, price & dry/cure job.  Unlike the Trident, it's more thoroughly dried & doesn't contain any tiny seeds which is a bad look for any medical strain (especially one costing $15/gram).  While Trident is stronger smelling and more potent, Church CBD is easier on the wallet & has more of a kick in terms of mindfuck/Sativa feel.  If you like that, more power to ya.  I do better with Indica strains.  40% Sativa is apparently a bit much for my taste.  As with alcohol, more potent doesn't necessarily mean better...and "better" is subjective anyway.  Despite the low THC content, I guarantee you'd be high if you smoked a fat bongload or joint of this stuff.  I'm gone off one hit.

I'd recommend Church CBD for patients with muscle spasticity, low appetite, epilepsy, nausea, glaucoma, depression & those looking for a solid mid-grade high.  There's not much that stands out about the high itself but the lime-scented smell is unmistakable.