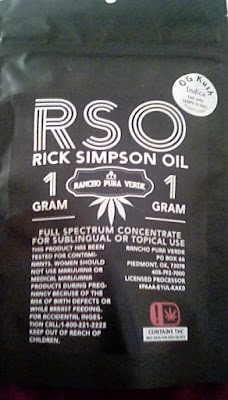 I don't go to the dispensary often but when I do, I stock up.  On my last run I picked up some Rick Simpson Oil along with my flower & edibles.  Rancho Pura Verde isn't well regarded in my state as a brand but it was all my dispensary had available so I went for it.  I use RSO in my homemade weed suppositories (actually I use them as "tampons" vaginally...sorry if that's TMI) so I'm not really ingesting it anyway.  I went all out & put a lot in this batch, though I couldn't tell you how much as I don't actually measure or weigh it.  The only ingredients are cocoa butter & RSO.  Here's how I make them in case you want to do it yourself.

This particular batch is OG Kush/Indica.  OG Kush comes from a Northern California strain crossed with Hindu Kush from Amsterdam.  I've never tried the actual strain but Leafly describes it as a hybrid that leans more toward the calming end of the spectrum, but not as much as one might suspect.  Reviews describe it as an 'old school classic video game high' (whatever that means) & it's typically reserved for pain, sleep & evening use.  So I suppose that's why it was chosen to make RSO, as Sativas are far too speedy & paranoia-inducing to use in potent oils like this.

Anyway, this batch turned out great.  The RSO applicator was easier to use than the previous brand, as the lid wasn't a screw-on type that gets stuck.  It just pops on and off which was much cleaner & less complicated.  Aside from that I'm not noticing a whole lot of difference in the effects between the two brands.  I'm definitely feeling chill & drowsy after using one of these suppositories but it's not uncommon for me to get sleepy mid-day like this either.  Plus I'm in a world of pain which tends to make me sleepy.  But there's no denying the potency of the RSO.  It's effective in the pain department when used this way so I can only imagine how killer it'd be if taken orally.  One syringe could last years with my tolerance if I was eating the stuff.

I give Rancho Pura Verde OG Kush Rick Simpson Oil a 4.8 of 5 stars for quality & price.  It was only $40 for a 1 gram syringe, which isn't bad compared to some of the $60 ones I've seen.  And it gets the job done just the same.  If you're ever picking up mmj supplies in the Southwest, give it a go!