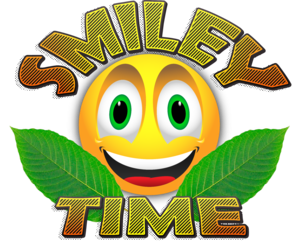 So this is the second in a trilogy of Smiley Time Herbal kratom reviews.  The first can be found here.  To recap, all 3 strains I received were supposed to be of the red-vein variety but appear bright green in color and the same exact shade of green at that.  The effects of the Pure Red Glow were extremely stimulating the way a green or white-vein strain would typically feel.  I'm trying to go into this review with a clear head and open mind but can't rule out personal bias, unfortunately.

The color of kratom powder actually reflects the drying method and therefore its effects.  Certain drying methods produce more 7-hydroxymitragynine for a "slower" (more sedating) effect while others contain more mitragynine and other alkaloids.  In any case, so-called red-vein strains should appear light to dark brown rather than bright green.  This tells me I was sold a green (or white) as a red which is not cool.  The question is whether I was sold ONE green packaged as 3 different strains or 3 different greens.  This will be almost impossible to discern from effects alone as too many other factors come into play with my own body chemistry.  So I'll just focus on reviewing the effects of the kratom as much as possible on its merits.

This is gonna be hard.  I wasn't expecting to be sold a lie lol.

So the Premium Red Vein MD is quite euphoric and slightly more mellow than the Pure Red Glow, though I used a much lower dose in this bottle of tea.  I was also feeling extremely fatigued when I drank it so I wasn't able to get a good read on its overall effects, but from what I could tell it was not nearly as "fast" as the Red Glow.  It didn't interfere with my codeine high which was also nice but leads me to believe it's not a true red strain, as they always render opiates ineffective for hours after dosing.

The problem here is not knowing if you're gonna get what you order.  For some people, kratom colors and strains don't matter--they all affect them basically the same way.  But for me that's never been the case.  I stick to reds exclusively because whites and greens are entirely too stimulating and not in a good way.  They feel like an overdose of an adrenergic stimulant like caffeine or Ritalin that makes my heart race and my blood pressure shoot through the roof.  I can tolerate only the tiniest dose of them compared to genuine red strains, which I can gulp down by the spoonful in my tea.  That part is NOT placebo effect.  So selling me a green or white as a red is not acceptable.  Selling me three greens/whites as 3 different reds is just plain fraudulent.

To be fair, I haven't contacted the vendor as I find all this too awkward to even bring up.  Kratom is technically not for human consumption so I can't discuss how it made me feel anyway.  I don't want my money back or a discount--I just want vendors to be honest about what they're peddling.  If you don't have a given strain in stock, take it off your website.  And know what you're selling.  But this doesn't look like an instance of ignorance, it appears more like someone running low on kratom around the holidays and possibly selling the last of their stock (one strain) as three different strains.  If I'm wrong, I apologize.  It's not my intention to slander anyone.  I'm just glad I didn't drop a bigger amount of money on this order.

To conclude, I give Premium Red Vein MD a 4.7 of 5 stars for effects, potency and price.  It was a solid strain on its own merits that lasts a long time and produces a moderately uplifting effect that doesn't cancel out my daily codeine.  It wasn't overwhelmingly euphoric or "warm" the way I like my kratom to be which is why I didn't give it a higher score.  The Pure Red Glow was slightly more euphoric, or else I was just feeling better when I consumed it.  It's impossible to tell whether these are the same strain or not so I won't try.  In the future I'll be sure to order from vendors who offer photos or descriptions of their products to avoid this kind of uncertainty.