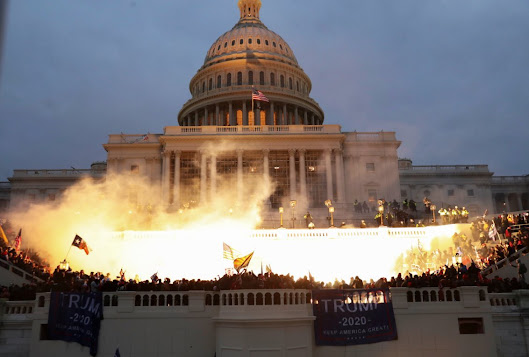 We're 6 days into the new year and already I'm writing a shitty article about how shitty the fucking new year is.  The United States is making history in the most embarrassing of ways as I'm sure you've heard.  Hoardes of Proud Boys, MAGA geniuses and QAnon protesters stormed the nation's capital to contest the election results for the umpteenth time and things turned violent, but far less violent than they would have if they had been of a darker skin tone.  Police went offensively soft on them, even appearing to usher them into the gates and inside the halls of the building itself, with some guards even taking selfies with the rioters.  One woman was killed by police at this event in total and 13 were arrested.  Contrast this with the hail of rubber bullets, mass arrests and killings that took place at the George Floyd protests over the summer.

To be clear, there's nothing wrong with storming the capitol or even engaging in armed protest as long as the firearms/weapons are legal and used for self-defense exclusively.   How cool would it have been if the guy kicking his feet up on Pelosi's desk was part of a Rainbow Coalition like the one created by Fred Hampton that brought together members of the Puerto Rican, white Appalachian and Black inner city communities to demand fair treatment by landlords and the police?  Or if the woman who gave her life had done so for the cause of, say, demanding Medicare For All during this pandemic that's killed more Americans in a single year than the Vietnam War, the first 10 years of AIDS & the 9/11 attacks combined?

Again, there's nothing wrong with storming the capitol, but doing so without any organization or demands as foot soldiers for a billionaire plutocrat politician is pathetic.  What we saw in DC was a case of misdirected anger, white privilege, machismo and yet another sign of a crumbling nation in decline.  Instead of demanding what they owe us as taxpaying workers, we're doing the dirty work of the rich and powerful who wouldn't piss on us if we were on fire.  And we are on fire, make no mistake.

But if a class-based insurrection DID attempt to overtake the capitol or anywhere else, they wouldn't make it past the doggie gates, let alone inside the bowels of the Senate.  That's how you know who is actually a threat to the powers that be:  it's all in the police response.  Or lack thereof.