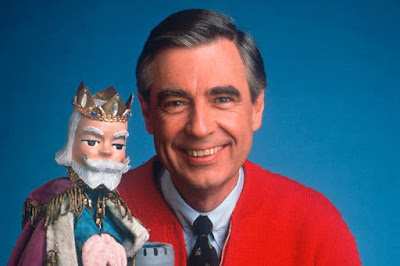 I just finished watching the touching "Won't You Be My Neighbor?" documentary (late, I know) and one thought kept floating through my mind.  (Okay, several but since this is a drug blog I'll stick to the relevant one).  Was Fred Rogers really as straight-laced and tee-totaling as he appeared?  For his ENTIRE life?  He lived to the ripe age of 74 and didn't appear to have any vices whatsoever.  Wasn't overweight, didn't drink, cheat on his wife (that we know of), gamble, smoke cigs, do illegal drugs or have any other addictions or even recreational vices that he indulged in.  At all, ever.

Now, a LOT of people try to portray themselves as what Fred actually was:  puritanical, abstaining from vice and the like.  Religious people mostly.  Mr. Rogers was certainly on the religious side:  he was a Presbyterian preacher but never a zealot or fanatic, choosing instead to use TV as his medium to spread the message of love and acceptance to children rather than standing on a pulpit and preaching at people.  Not really comparable to today's typical Christian though.  Most of those types have skeletons stacked high in their closets.  See:  televangelists and megachurch pastors such as Ted Haggard, Eddie Long, Jim Bakker, Jimmy Swaggart & countless others who have been swamped in scandals ranging from illicit sex to drugs to embezzlement.  Even the typical everyday Christian at your local church is more likely to fall into this latter category than the Christ-like one Fred Rogers occupied.

But Rogers was, by all accounts, "really like that".  Which is hard for me to grasp.  What kind of grown man is that interested in children but not for nefarious reasons?  What's with the creepy puppet voices?  Was he secretly gay?  The mind tends to fill in the vacuums of information with our own creations.  But as the movie wore on it became clear he was genuine and, most importantly, there have been zero allegations of wrongdoing in all these years that would give one reason to suspect unspeakable motivations.  (Yes, I've been jaded by LIVING ON EARTH.  Don't judge me).  Nor anything about being a closeted gay man or drug user.  What does one do if not engaging in pleasure-seeking, dopamine boosting endeavors?  At least some of the time?  How do you even unwind or celebrate?  And remain so cheerful and optimistic?

Thus is the mystery and wonder of Mr. Rogers.  A true gem in a world of turds.  One does have to wonder how he would've tackled issues in the post-9/11, divided nation we've become.  A lifelong Republican, would he have remained in the party with Trump's rise?  Addressed QAnon and COVID disinformation on his show?  Almost no one has escaped the partisan brainwashing in the years since 9/11, so it's hard to say with certainty that he wouldn't have fallen victim to some extent.  He was visibly shaken by 9/11 in a way he hadn't been with other national tragedies, that much is clear from the documentary.  This happened near the end of his life at a time when FOX News pundits were attacking him for telling kids they were "special" and thus blaming him for a generation's perceived failures.  Who knows--maybe he would've seen the rot in the Republican party and exited at some point?

I suppose it's pointless to speculate as he left this mortal coil in 2003 after a bout with stomach cancer.  While we need a Mr. Rogers now more than ever, perhaps he could've only existed in the time he did--that Golden Age of TV from the 1960s through the late '90s before viral internet clips took over and attention spans shortened to that of a goldfish.  Along with Reading Rainbow and Sesame Street, Mister Rogers' Neighborhood was one of the three formative shows in my toddler years that I still remember vividly and credit with helping me form an inclusive, open view of the world.  Being raised where I was (middle of nowhere with no contact with other kids/races at the time), I credit these shows with teaching me tolerance at a vital developmental period... a tolerance that my family did NOT share, unfortunately.  It was never pushed in a preachy or obnoxious way but was totally natural unlike today's programming.  A product of the times I suppose.

Then again, we need quality kids' programming now more than ever to give children a chance at healthy development in this crumbling society.  If we relegate all such programming to a bygone era, we're doomed to deprive our kids of the same quality shows we grew up with.  In a time when parents are out of work and struggling like never before, TV plays an even bigger role in early childhood development--particularly for underprivileged kids.

Where is this generation's Mr. Rogers?  Won't someone step up to fill the role of patient, neighborly, reassuring mentor to today's kids without expecting stardom and hero worship in return?