Future So Dark We Need a Searchlight 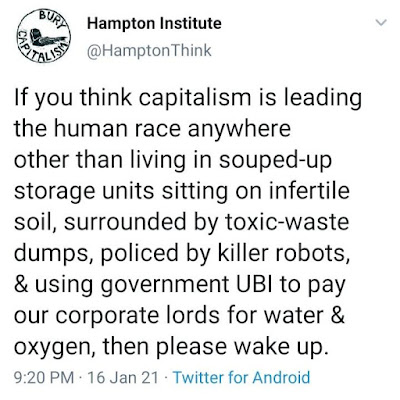 Think this sounds melodramatic?  Keep reading.  And follow the links.

Souped Up Storage Units:  We've got our own 'tiny home' trend here in the States but things are even more bleak in Hong Kong.  If you haven't seen their coffin homes, well... have a look at this article right now.  Here's a quick excerpt:  "But coffin homes aren't the worst of it.  Some residents, predominantly elderly men, stay in public housing that swap bunk beds for stackable cages.  Typically, up to 12 men live in one room."

Killer Robots:  This "dog" named "Spot" will give you nightmares.  No, really.  Its purpose is to enforce social distancing in a park in Singapore but it foreshadows a dark future in which robot police are used for more nefarious purposes.  Let your imagination run wild.

Paying Corporate Lords for Water & Oxygen:  As I wrote about last year, water was added to the stock market as a commodity to be traded for the first time as fears of scarcity escalated.  And now we've got companies selling literal air to people living in places with poor air quality.  Small personal units, of course.  Great for the environment.

Sadly this meme barely touches on capitalism's harms.  Here in America during the worst pandemic since 1918 in the midst of worst economic downturn since the Great Depression, there are more million dollar homes selling than ever (to the wealthy, of course).  And renters aren't any better off--corporations are now buying up apartment complexes in cities around the country, driving prices up and making life a living hell for tenants.  Gentrification is coming no matter where you reside.  And Democrats are "pushing" for a $15 minimum wage as if that's radical when it was actually first proposed around 2008.  It would likely need to be closer to $25-$27 to keep pace with the cost of living in 2021.  Maybe higher in some places.

In "1984" news, we're being tracked and monitored by our smart devices day and night as the NSA gathers all our emails and communications in bulk.  Meanwhile, facial recognition software is implemented in more public places CCTV style without our awareness or consent.  Yet despite all this surveillance, they can't even stop the spread of a deadly pandemic, catch terrorists hiding in plain sight or stop the flow of deadly fentanyl analogues pouring into the country by the kilogram.  The FBI needed the public's help to track down insurrectionists whose faces were CLEAR on surveillance cameras and who most definitely had posted on social media in the weeks leading up to the capitol riots, ffs!

The human race keeps multiplying as if everything is fine (the dog in hell meme comes to mind) with Americans exporting our over-consumption habits worldwide at a breakneck pace as if the party can continue forever.  Infinite growth on a finite planet seems to be our mantra, though it's also the motto of a cancer cell.  Governments do next to nothing to address the issues of climate change, pollution, extinction of species and weather pattern changes that are happening RIGHT NOW--not in some distant future scenario.  Where I live (tornado alley), there aren't even any public tornado shelters in schools for children, let alone adults in the community.  If you can't afford to build a cellar or basement, you're shit out of luck when--not if--an EF4 or EF5 tornado hits...an event that's becoming ever more frequent due to climate change.

So where are all the free market solutions and innovation?  We're not living in a pure capitalist free market like we've been told; it's a dystopian corporate fascist hellscape wherein corporations and the government have joined forces to fuck over individuals while bailing themselves out every time they fail.  Wages haven't kept pace with the cost of living so the average person can't afford any half-assed solutions offered anyway.  We're all one paycheck or emergency away from ruin.  When social emergencies like COVID or the 2008 housing crash happen, the rich get richer at our expense.

When our economy does finally bite the dust permanently, it will be the result of unchecked wealth-hoarding at the top, not "communism" or any other outside force.  No matter how much money the 1% have, there are a only so many pillows, chandeliers, cars, barbecues and other products they can buy.  That money needs to be distributed to the many so we can continue supporting the demand side of the supply-and-demand side of the equation.  This is why stimulus checks are so important during the pandemic and, in the longer term, why universal basic income will become absolutely vital as AI/robotics take over more of our jobs.  Aside from the moral human reasons, of course.

Unfortunately our government is run by septuagenarian sociopaths whose brains are addled by decades of lead poisoning, ranting TV and radio news pundits, widespread diabetes and its eventual end result:  dementia (also known in the medical community as "Type III diabetes").  They give not one shit about the long-term or even the mid-term as they'll all be dead by then, their looting and plundering scam complete.  As long as social security holds up for them, that's all that matters.  The Baby Boomers are the "Me" Generation, after all.  But assuming that a younger government will automatically solve our problems is dangerously misguided because the same corporate forces still remain in power behind the scenes.  Nancy Pelosi started out as radical as AOC and even advocated for universal healthcare back in 1994; she's since changed her tune.  The lure of wealth, taxpayer funded healthcare and vacations, Twitter fame and all the other perks that go along with being in congress or senate mean one thing:  the Democrats and Republicans change YOU, not the other way around.  Intentions don't count for a hill of beans on The Hill.
Pelosi argues for single-payer healthcare floor vote in 1994
I wish I could wrap this up with a neat conclusion section full of helpful solutions but sadly I can't.  The psychopaths at the helm aren't going to relinquish control peacefully--why would they?  They didn't gain their power peacefully either.  Many millions have suffered and died in the name of upward wealth transfer and many more will die before the pyramid scheme is complete.  Our only course of action is a prolonged #generalstrike and other coordinated actions that will bring this shitshow to a halt.  We must start speaking their language:  money.  It's the only thing they understand.  Boycotts and strikes are the most effective weapon we've got in this profit-driven corporatocracy.

If you enjoyed this article, drop a buck (or whatever you like) in one of the accounts below.  Google AdSense does not support "drug-related" content so I rely on your contributions to keep this blog running.  It's hard out here for an independent freelance writer in the digital age.  Thank you!