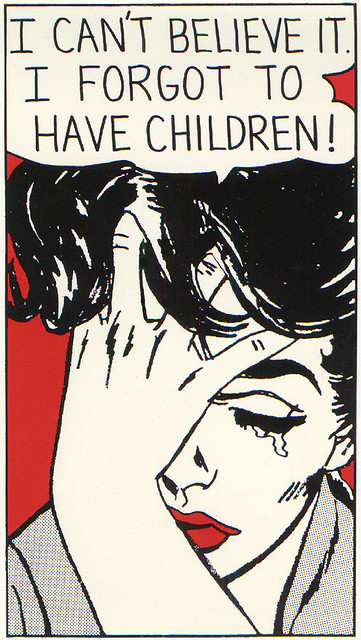 Today I was talking to a dental assistant while waiting for an X-ray.  I'd never met this woman before in my life (and never hope to again).  While discussing kids I told her casually I didn't have any & wasn't going to.  She looked shocked & said:  "Why would you not want kids?  What are you going to do when you're 80 & in a nursing home?  You're going to die alone.  You're young & pretty now but...somethin' to think about."

Here's the thing.  We're all going to die & 100% of us are going to die alone.  You can't take any of this earthly stuff with you when you go, and that includes loved ones.  Even if there are 25 people huddled at your bedside & 1,000 mourners with candles in the streets when you pass, you're still making that final journey completely alone.  They'll be attending to the shell you leave behind--aka your body.  But your consciousness will no longer be occupying it.  Whatever happens (or doesn't) at the moment of death is something only you can experience.

Death only happens once & is a momentary occurrence.  To arrange your entire life around this singular event seems like a waste.  People who have children for fear of ending up in a nursing home are also making a huge mistake.  Ask any rest home worker how many of the patients have children & you'll get the same answer:  "Most or all of them".  Ask how often the kids come to visit & you're likely to get a really depressing answer.  It's not that anyone WANTS to put their ailing elderly parent in a nursing home--it's that these "kids" grow up to have their own jobs, families & responsibilities.  Unless they have a nursing degree & lots of free time, they aren't qualified to provide round-the-clock care for someone with advanced dementia, Parkinson's or some of the other debilitating diseases that land people in nursing homes.

I'm not bashing parents who put thought into their decision to have kids.  I'm just sayin'.  Fear is not a good reason to reproduce.  Nor is having kids in the hopes (or expectation) that they'll stick around & care for you 24/7 when you're elderly.  In a perfect world things might work that way, but there are no guarantees in this one.  And honestly, your kids don't ask to be born in the first place...let alone to be cast in the role of elderly caregiver.  That's a big expectation.  What's more, you may not even live to be that old; your kids might not make it to adulthood themselves.  This isn't doom-and-gloom but reality.  There are simply too many unknowns to make this a viable premise to base your reproductive choices on.  And frankly, it's a tad bit egotistical to create a life from the ether just so they can hopefully wipe your ass one day when you're 90.

Never mind the absolute social retardation & downright rudeness of saying such a thing to a perfect stranger.  I would never inquire about someone's personal marriage/reproductive choices, let alone criticize them for it!  It reeks of buyer's remorse or wanting to drag others down into your hell of a life.  If you're truly happy with your decision, you won't CARE what some stranger chooses to do with her hoo-ha.  You've made your bed & I'm making mine.  If I regret it later, that's my problem.  Better to regret not having kids than to have them for the wrong reasons & regret THAT.  Because the latter scenario involves another innocent being.


Quick humble brag:  Childfree people are doing more to reduce their carbon footprint by not having kids than any other group or activity.  We're not relying on welfare to support kids we can't afford or risking passing down mental/physical illnesses that run in our families & would cost taxpayers millions each year.  And because we KNOW we wouldn't make good parents, we're preventing the abuse, neglect & endangerment of countless children who would otherwise be at risk for these things.  We are the cool aunts/uncles who dote on our nieces & nephews; the cat & dog-lovers who rescue needy animals.  The teachers, nurses & other "helpers" who influence your kids every day despite not having biological ties to them.  Bottom line:  We're hurting no one & actually easing the burden on an overcrowded, overpopulated planet.  We're not perfect but we just want to be left alone to carve out our own paths without scrutiny from self-righteous breeders.

(And yes, there's a world of difference between "parents" & "breeders".  Parents plan their families, carefully weigh all the pros & cons and have kids for reasons other than selfish "legacy-preservation" ones.  Mindless breeders don't even stop to realize that reproducing is a choice & a most important one at that.  They treat kids as an inevitability or a souvenir of a relationship rather than a thinking, feeling individual who will one day have to fend for themselves in this world.  It's all about them.  They are notorious for wanting society to help parent their badly behaved children & act entitled to things like special parking places & free school lunches that other parents have paid for.  We all know a couple).

Just a quick PSA from a childfree 30-something who regrets nothing.  Live & let live and think before you speak.   🙈🙉🙊