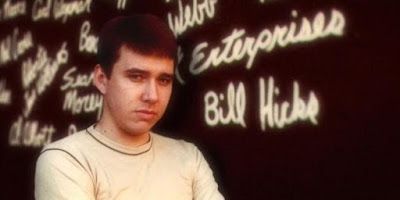 What can be said about Bill Hicks that hasn't already been said a hundred times?  He's frequently included in "Top 5 Comedians of All Time" lists, and for good reason.  Those things are subjective, obviously, but his rebellious & brutally honest style of social commentary combined with a uniquely cynical wit are unmatched by anyone save for maybe George Carlin.  Hicks was an even edgier version of that.

Thoroughly Southern, William Melvin Hicks was born in 1961 in Georgia and died in Little Rock, Arkansas, residing in Texas for most of the years in between.  But Jeff Foxworthy he was not.  He spent much of his stage time taking down the rampant ignorance & rot plaguing rural America.  He worked extremely hard, putting on around 270 shows a year & was more popular in the UK than the U.S.  It was only near the end of his life that he was starting to gain traction here.

Bill began his comedy career in earnest at the tender age of 13, sneaking out to perform at clubs in Houston with the Texas Outlaw Comics group that included Sam Kinison & Ron Shock among others.  The demanding lifestyle eventually led to the abuse of alcohol, drugs and especially cigarettes (Bill jokingly said he went through "two lighters a day").  It was this vice that would later come back to haunt him.  Much of his act centered on recounted stories of his psychedelic experiences & the absurdity of the drug war.  By 1991 he claimed to have stopped drinking & abusing drugs, citing an inability to control his drinking though his views on the drug war never wavered.  He also played in a band & did some comedy writing for TV on the side but was adamantly opposed to "selling out" by doing commercials or other things that compromised his artistic vision.

While Hicks is lionized today by fans who view him as a prophet, he was not without his faults.  Some of his bits came off as elitist, and his misogyny was on full display during this meltdown when hecklers in Chicago--2 male and one female--rudely interrupted his set.  But he only singled out the woman with an unholy tirade I won't repeat here.  Listen yourself:


I don't support censorship & abhor today's hypersensitive climate where people sit around on Twitter waiting to be "offended".  But some things truly ARE offensive.  Even when a comedian says them.  This outburst brought to mind Michael Richards' infamous hurling of the N-word at hecklers.  The fact that society doesn't view misogyny on par with racism speaks to how far we haven't come.  They often go hand-in-hand and sure enough, Hicks can be heard in this clip joking that Reginald Denny should have floored it and run over the "gang" of protesters during the LA riots.  Even by 1993 standards that's harsh.  (I won't even get into his Goat Boy act where he goes into graphic detail about a sex fantasy with a 16-year-old).

Still, the rawness of his act could be brilliant at times, like when he critiqued the Iraq war, advertisement/marketing, Christianity or the Republican party.  (In other words, when he was punching UP instead of DOWN).  This happened more frequently toward the end of his life, which came on February 26, 1994.  He died of pancreatic cancer at age 32 which was diagnosed in mid 1993 after he developed searing pain in his side.  This type of cancer is rare in people that young so it's assumed that his heavy smoking contributed greatly.  Smoking is one of the few known causes of pancreatic cancer.  This makes all his smoking jokes a bit uncomfortable to watch in retrospect.  Bill performed right up until the end, never letting on that he was sick to his audience though he did say "this is my last performance" a couple times.

Perhaps his most depressing end-of-life performance was his 12th appearance on David Letterman which was pulled at the last minute due to being "too controversial".  This was a betrayal that hurt him deeply.  He went on public access TV & spoke about it, citing "pro-life advertisers" as the likely reason for the appearance being pulled (though producers never told him why).  Dave had no idea he was sick but that's beside the point.  In 2009, Letterman had Bill's mom on the show & apologized, airing the piece in its entirety for the first time.  Nice gesture but too little too late for Bill himself.

In his last year on this earth, Bill Hicks was voted "Hot Standup Comic" by Rolling Stone magazine, opened a number of shows for rock band Tool at Lollapalooza, recorded his album Arizona Bay with friend & director Kevin Booth & was working on a talk show with comedian Fallon Woodland called Counts of the Netherworld.  Plus maintaining his regular busy touring schedule.  His albums Arizona Bay & Rant in E-Minor were released posthumously.  It's clear that his star was finally rising in America, which made his passing all the more tragic.  This timing was not lost on him.  He left us this final heart wrenching letter a week before dying:

"I was born William Melvin Hicks on December 16, 1961 in Valdosta, Georgia. Ugh. Melvin Hicks from Georgia. Yee Har! I already had gotten off to life on the wrong foot. I was always "awake," I guess you'd say. Some part of me clamoring for new insights and new ways to make the world a better place. All of this came out years down the line, in my multitude of creative interests that are the tools I now bring to the Party. Writing, acting, music, comedy. A deep love of literature and books. Thank God for all the artists who've helped me. I'd read these words and off I went—dreaming my own imaginative dreams. Exercising them at will, eventually to form bands, comedy, more bands, movies, anything creative. This is the coin of the realm I use in my words—Vision. On June 16, 1993 I was diagnosed with having "liver cancer that had spread from the pancreas." One of life's weirdest and worst jokes imaginable. I'd been making such progress recently in my attitude, my career and realizing my dreams that it just stood me on my head for a while. "Why me!?" I would cry out, and "Why now!?" Well, I know now there may never be any answers to those particular questions, but maybe in telling a little about myself, we can find some other answers to other questions. That might help our way down our own particular paths, towards realizing my dream of New Hope and New Happiness. Amen. I left in love, in laughter, and in truth and wherever truth, love and laughter abide, I am there in spirit."

One of the weirder (and more obnoxious) theories to pop up since Bill's passing is the assertion that he's actually conspiracy theorist Alex Jones in disguise.  This is disrespectful not only because the man died tragically young of a horrific disease but because his worldviews were 180 degrees from the bile-spewing Jones.  While Hicks did hold some unconventional views on events like the JFK assassination & Waco, he was a far cry from Jones' brand of dumbed-down proselytizing.  It's like claiming Carlin is actually Breitbart.  Blasphemy.

Bill's real legacy is a mixed bag of genius & darkness peppered with a healthy serving of sarcasm, crassness, bravery, adoration of music/intellectualism and a sense of urgency to speak some elusive truth.  We now see why:  his time on Earth was short.  Maybe he sensed this on some level.  It's impossible not to wonder what Bill would say about today's insane political & social climate.  What would he think of social media, reality TV...a reality TV president?  Would he have "sold out" & done commercials or stayed true to his '90s scruples?  It's almost certain he would've been a 9/11 truther & worked that into his act.  Beyond that, who knows?

It's a shame he was taken so soon but perhaps, as with Kurt Cobain, his early death allows us to hold him in an even higher regard because he was not allowed to make all the mistakes a person with a long career makes.  He was never offered the big bucks so we can't know for certain if he would've sold out at some point, such as when he had a family to support or became too old to put on 300 shows a year.  And there's no way he could've "gotten away" with 70% of the material he did today, at least not without being blackballed by the industry & critics.  That notwithstanding, he would've had to come up with far more material in general due to the advent of cell phone cameras that allow everyone to share things instantly with the world.  (His bits were often recycled because back then, it was all new to every new audience).

There's no one today that even resembles Hicks and maybe there's a reason for that?  Trying to watch Louis CK after a Hicks set just highlights the whole "dick joke" tone of today's comedy.  People really are a product of their time to a great extent.  Bill was borne of that disaffected Generation X cohort raised on Punk rock, MTV, Watergate & Quaaludes while the world he left behind was one of Hip-Hop, Grunge, AIDS, crack cocaine & personal computers.  It was a different time & he was one of the important voices of it.  The fact that much of his material stands the test of time is a testament to his talent. 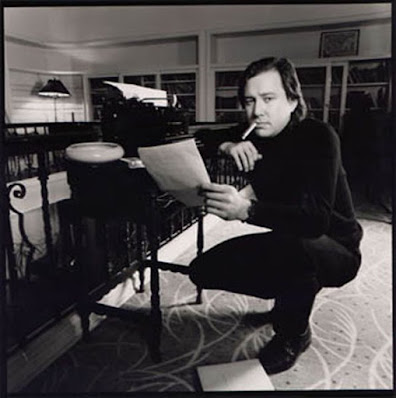 If you enjoyed this article, drop $1 (or whatever you like) in one of the accounts below to keep this blog running.  Google AdSense does not support "drug-related" content so your contributions are greatly appreciated: