Smoking vs. Vaping Weed: Which is Safer? 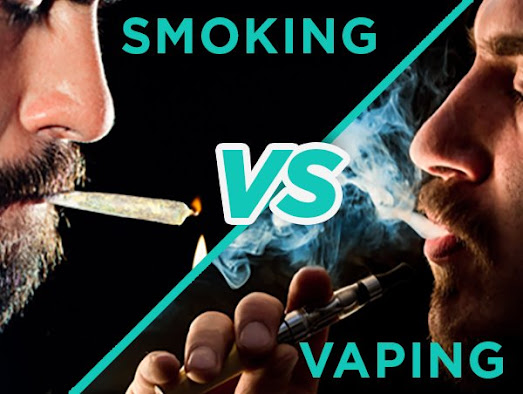 We all know that smoking carries inherent risks to the lungs and airways.  Vaping has been sold as a safer method of cannabis consumption, and it's certainly more discreet.  But with all the news about vaping lung disease (EVALI), serious doubts have begun to rise about whether this method is safer than smoking.  So which is truly better for your health?

First, let's dispel some of the myths about smoking cannabis.  While weed smoke is an airway irritant that can cause coughing and worsening of conditions like bronchitis or asthma for some people, it is not known to cause lung cancer the way tobacco does.  Tobacco causes cancer even without combustion (see: chewing tobacco/snuff) because it's inherently carcinogenic.  That's largely due to the way it's grown using fertilizers that break down into radioactive elements like polonium-210 and radon.  Not the case for cannabis which has anti-tumor properties.  This idea that it's the "tar" in smoke that causes lung cancer is a myth.  That doesn't mean it's good to inhale burning plant matter in large doses every day.  Common sense dictates that doing so would lead to airway inflammation and potentially damage to the throat or lungs over time, at least for some people.

Nicotine also has vasoconstricting properties that lead to heart and vascular damage and cause airways to tighten; the opposite is true with cannabis smoke, which is a bronchodilator.  Anyone who has smoked both cigarettes and cannabis will tell you the two types of smoke affect the lungs VERY differently, with weed causing the characteristic coughing fit it's so known for.  This is because it's actually opening your airways & helping you cough up sputum.  Again, that doesn't mean it's good for you, just that it has little in common with tobacco smoke.

Vape cartridges on the other hand are a relatively new phenomenon compared to smoking cannabis which is as old as time.  While touted as safe, we've seen waves of death & disability caused by contaminated vape carts thought to contain Vitamin E acetate (though in some cases the cause was not 100% nailed down).  There's still much we don't know about the effects of vaping on the lungs and with all the ingredients that can be present in a single cartridge, it can be next to impossible to ensure safety.  We know it's bad to vape lipids like Vitamin E, but what else?  Can the parts of the cartridge itself cause illness?  Food-grade terpenes as opposed to cannabis-derived?  What if the weed in the distillate was grown with pesticides or growth regulators like Eagle-20?  Too. Many. Variables.

As someone who has only bought vape carts from licensed medical dispensaries and gotten nasty side effects from ALL of them after using only small amounts, I can attest that something is awry in the vape cart industry.  Indeed, Leafly dropped a disturbing article about the lack of regulation and changes since the EVALI outbreak that pretty much confirmed my suspicions.  That's not to say vaping liquid cannabis distillate can't be made safe with the right regulations, but right now I don't trust even the medical industry to do this.  Quite frankly, I don't think enough is known about all the different safety factors of vaping distillate, terpenes, carrier materials, etc to even set that type of legislation in motion.  And that's a shame because it really is one of the most discreet ways to enjoy a quick, discreet hit.

So what's the hands-down safest way to inhale your weed?  The answer is simple:  dry herb vaping.  This involves heating dry flower to a temperature below combustion rather than vaping from a liquid cartridge.  There are virtually none of the risks of smoking OR using a liquid cartridge and you only have to buy one vape device (though it can cost around $300 for a good one).  The biggest drawback is the smell--definitely not discreet like vape carts, and some of the devices can be large & clunky.  I haven't personally invested in a dry herb vape yet but it's on my to-do list.  Here's a full article on some of the vapes shown below if you'd like to learn more.

Barring that, smoking from a device like a (clean) bong that cools and filters your hits is probably the second best option.  I could get into the weeds (pun intended) with all the high-tech gravity bongs & other devices out there these days that are above my paygrade, but the take-home message here is that filtering your smoke is gonna be better for your throat and lungs than hitting it straight.  Obviously edibles would be better than all of these but we're focusing on inhaled methods so that's another topic for another day.

Do you have a favorite dry herb vape that's both affordable and durable?  Sound off in the comments!  I'm still shopping around for mine and will probably update with an article when I decide.