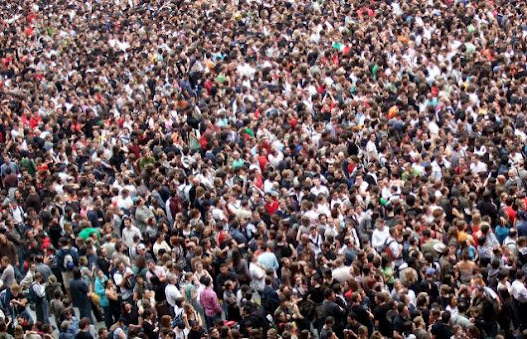 I noticed a recurring theme during the pandemic:  people who said things like "we are the virus" when pointing out that pollution improved due to lockdowns were labeled "eco-fascists" by fellow leftists.  These folks claimed that such statements inherently blame poor people for reproducing... or something.  Any discussion of (human) population control is off limits within these circles for this reason.

This begs the question:  Is it really fascist to advocate for responsible reproduction when we're on the precipice of the 6th Great Extinction?  I'm not talking about eugenics or "population control for the poor & feeble-minded," but by as a conscious decision and for EVERYBODY.  In a world plagued by climate crisis, air pollution, extinction of species and new deadly diseases every few years, ignoring overpopulation is like signing our own death warrant.  While melodramatic, cliches like "we are the virus" contain a grain of truth.  A giant one.  A pillar of truth, if you will.

As a member of the Green Party, I realize this view is practically blasphemy.  Their central platform is eco-socialism so advocating for population control at any level is a non-starter.  But should it be?  We preach spaying and neutering of animals to "control the pet population" because doing so is common sense but get all in our feelings when the logic is turned on us, even though we're the ones driving the planet off a cliff.  Don't all living things have just as much right to exist as we do?   I'm not asking anyone to give up eating meat or change their lifestyles drastically (i.e. start eating bugs or living in cage homes to save space); I'm simply proposing having 0-2 kids which is enough to replace the child's parents when they die without adding to the overpopulation problem.  How much restraint is REALLY required there?

If we don't do these things, the sacrifices our kids will have to make will be far greater.  Luxuries we take for granted like heating and air conditioning may be out the window due to climate change literally breaking the power grid, and the food and water supply will be greatly compromised.  Famines will become the norm everywhere.  Climate refugees from all over the world will be at our borders, dwarfing the "immigration crisis" Republicans currently wring their hands about.  The Marshall Islands are already sinking, and the capital of Indonesia--Jakarta--is so far underwater they had to designate a new capital of the country.  These things should be headline news all over the world but seem to be buried by trivial stories on purpose to prevent an all-out panic.  Then again, judging by the way people under-reacted to COVID, I'm sure the denialists would just go on living their selfish lives of convenience.  They already are.

This fanciful idea that "we don't need fewer people, we just need to change our Western ways and consume less" is great in theory but we haven't proven we can actually do it.  Quite the opposite:  more countries are becoming 'Westernized' as corporations expand their ominous reach and existing people yearn for the comforts we already enjoy.  And honestly, it's a bit hypocritical to tell developing countries they aren't entitled to the same conveniences we have access to even if they're not sustainable or healthy.  Meanwhile technologies like IVF ensure that fewer existing orphans get adopted, as do exorbitant adoption fees (though those who can afford IVF could certainly afford adoption if they were so inclined).  All of these things cause the human population and our attendant pollution problem to increase while driving down animal populations drastically.  This is sheepishly referred to as "habitat loss," though suburban sprawl and human overpopulation are the actual underlying cause of the slaughter.  We've lost 50% of the world's wildlife in the last 40 years as a result of this development.  WE'RE GOING IN THE WRONG DIRECTION AS A SPECIES.

Before anyone chimes in with the oh-so-clever "then start with yourself", nobody need kill themselves.  If you already exist, wonderful.  You had no choice in the matter.  But you DO have a choice in the number of kids you have if you live in a nation where contraception exists.  This goes equally for men and women.  The number of children you have is the single most impactful decision you'll ever make in regards to your carbon footprint.  Read that again.  If my childfree ass was to drive a gas-guzzling SUV, fly in a private jet monthly, eat meat for every meal, mine Bitcoin in my backyard & start farming cows that fart methane all day, it STILL wouldn't do as much CO2 damage as bringing a single child into this world.  And nowhere near as much damage as 3 or 4.

And that's the thing:  Existing people shouldn't have to restrict their actions for fear of causing the End of Days.  But we're at a point where we're gonna have to choose between quality of life or quantity of life.  If you choose quantity (i.e. number of humans), don't be shocked when quality declines dramatically & permanently for everyone.  It already is.  Remember when I mentioned eating bugs and living in cage homes?  Those are real things that are already happening or being suggested in first-world nations due to food shortages and exorbitant housing prices.  Imagine how bleak things are going to look in 2 or 3 generations.  Do I actually want to mine Bitcoin and start a farty cow farm?  Hell no, but I also don't want to live in government-assigned cages paying for clean air in pods (already happening) while water is traded on Wall Street due to scarcity (also happening).  There is a happy medium somewhere in there.  Americans are notoriously bad at happy mediums & nuance.

Reducing human population may not be a panacea but it is the starting point for healing.  The bare minimum.  Without it, we can't undo or even stop the damage that's currently in progress.  All the breakthroughs we've made as a species, as well as all the majestic beauty of the other living things we share the planet with, will be lost.  And that's not an overstatement.  I strongly recommend watching David Attenborough's special on Netflix if you haven't already.  Don't listen to politicians or industry profiteers when it comes to matters of science.  We did that with COVID and ended up with 600,000+ Americans dead and many millions more dying worldwide.  Listen to the experts who've dedicated their lives to studying nature, science, medicine, biology and related fields.  They have no dog in this race.  Nor do I.  Except, you know, preventing total annihilation of the blue planet.

I would argue that what we're doing right now is eco-fascism.  Irresponsibly reproducing with no consideration for the environment while hypocritically controlling the animal population is the height of egotism.  Nobody ever said that only poor people should refrain from having kids or limit their family size & if they did, they're misguided.  We're at the point where it's on all of us to do so for the future of our planet and any children we do have.  And it's past time to start having uncomfortable discussions like this if we care anything about the future of the human race beyond our own selfish desires.